“I do not pray for these alone, but also for those who will believe in Me through their word; 21 that they all may be one, as You, Father, are in Me, and I in You; that they also may be one in Us, that the world may believe that You sent Me. 22 And the glory which You gave Me I have given them, that they may be one just as We are one: 23 I in them, and You in Me; that they may be made perfect in one, and that the world may know that You have sent Me, and have loved them as You have loved Me.” (John 17:20-23 NKJV)

Of myself: born and baptised in Roman Catholicism but when an adult became anti-church; but blessed to be saved and born-again by and baptised in the Holy Spirit, I regard myself as being non-denomination and desire the manifestation of the above prayer by My Saviour Jesus the Messiah.

And guess what? I find Donald Trump, the President of the United States of America, is in the same boat with me – ie. non-denominational – as we shall soon see!

So let’s quickly recap thus far on this posts’ specific topic. We’re examining the claim from British pastors’ perspective that, as reported superficially by biased media, there are grounds for doubting Donald Trump has “the values of Jesus or a heart for His Kingdom.”

However, my blog’s historical data reports:

An inserted re-blog from the ‘Never-Trump’ author Joel Rosenberg tells what changed his mind and how he told President Trump when ‘Veep’ Pence took him to meet him in the Oval Office:

“Sir, if you accomplish nothing else for the rest of your term, you will go down in history as the most pro-life and pro-Israel president in the history of the country. And I just want to say, on behalf of my wife and me, thank you.”  The President seemed moved. Then I noted the Bible commands believers to “pray for kings and all those in authority.”

“I want you to know, sir, that I have prayed for you and your family every day since you took the Oath of Office.”

“Thank you, Joel,” Trump replied. “That means a lot to me.” END_OF_DOCUMENT_TOKEN_TO_BE_REPLACED

Further to Part 1’s closing quotation from William Koenig on Donald Trump’s inauguration in January 2017, readers may like to check this overview of his book on Obama’s dangerous legacy.

His location brought close familiarity with the work of several presidents and so William noticed the contrast between the last administrations is like that between darkness and light!

He emphasises that not since Ronald Reagan’s presidency have ALL Christians been so welcome in every area of the White House as they are under Donald Trump and Vice President Mike Pence. As a newly refreshed believer the President has become more open to the Lord and, supported by Franklin Graham and other Christian leaders, is moving forward in his faith. SO please avoid jumping to conclusions and making inaccurate even presumptuous judgments.

We will look more closely at Donald Trump’s faith and its application in furthering Kingdom principles later.

First, let’s look at his overturning a couple of his predecessor’s policies that were detrimental to moving God’s Kingdom forward. END_OF_DOCUMENT_TOKEN_TO_BE_REPLACED

On March 7, 2019, I entered the Oval Office for the first time in my life. Vice President Mike Pence, a friend since 2012, and I had just had lunch in the White House Mess. We had discussed the administration’s Middle East peace plan, which was then still in development, and my recent private meetings…

Continue reading At > I used to be a “Never Trumper.” Not anymore. 20 reasons I strongly support the President’s re-election. — Joel C. Rosenberg’s Blog

The Saudi Foreign Ministry has just released a quite positive statement on the White House peace plan. They thank President Trump and his administration for their efforts to make peace between Israel and the Palestinians. They also urge the Palestinian leadership to take the plan seriously and return to direct negotiations. Based on my meetings…

via BREAKING: Saudis release positive statement about Trump peace plan. What exactly did they say? What exactly does it mean? A few thoughts, based on my visits with MBS. — Joel C. Rosenberg’s Blog

In both their Arabic and English editions, the Saudi Gazette has just published a rare and possibly unprecedented front-page interview with an Evangelical Christian speaking candidly about war, peace, reform, the Crown Prince and what followers of Jesus believe.

JEDDAH — Crown Prince Muhammad Bin Salman is leading Saudi Arabia through the most dramatic, positive and exciting social and economic reforms in the history of the Kingdom, said Joel C. Rosenberg, New York Times best-selling author and head of the Evangelical Delegation, in an exclusive interview with Saudi Gazette, following his visit to the Kingdom recently…..

Rosenberg: None of us want to see another war in the Middle East. As followers of Jesus Christ, we are commanded in the Bible to pray for peace and to be peacemakers. So, we are praying fervently for peace and stability. At the same time, however, we… 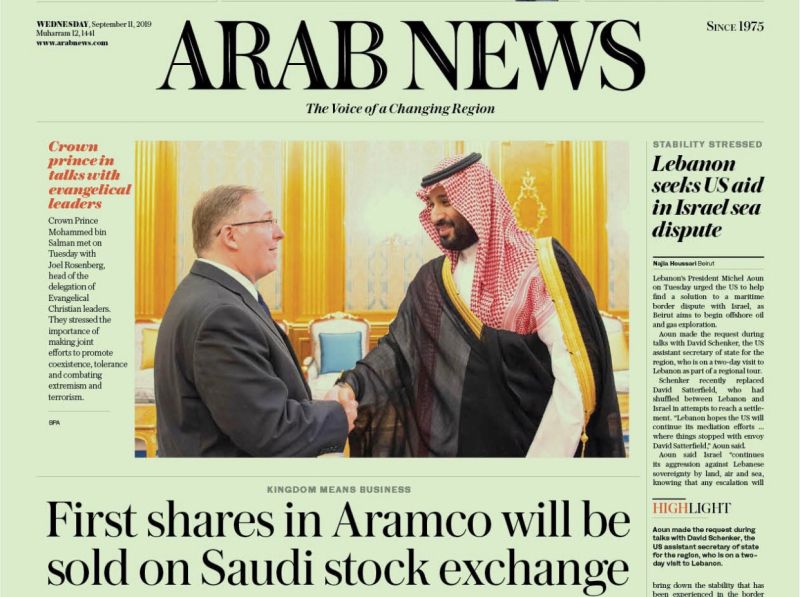 After speaking with Saudi Crown Prince Mohammed bin Salman (MBS), President Trump says US forces in the Gulf are “locked and loaded,” strongly suggesting he may order retaliatory military strikes against Iran, possibly within the week. All eyes are once again on the Middle East, yet the US media has largely ignored a group of […]

(Washington, D.C.) — Last Thursday, I was humbled to be invited to the White House for four hours of meetings regarding the upcoming rollout of the President’s Middle East Peace Plan, as well as the threats posed to the U.S., Israel and our allies by the rogue regimes in Iran and North Korea. The morning […]

Continue reading at > Meeting with the President and VP to discuss Israel, Iran, North Korea and the future of peace. I told him I was once a Never Trumper. I also told him I’m deeply grateful for many of the actions he’s taken in office & pray for him daily. — Joel C. Rosenberg’s Blog

A most historically noteworthy event reported by Joel Rosenberg. Perhaps we’re heading towards fulfillment of Isaiah 19:23 on a highway being built from Egypt to Assyria and that both nations will form an alliance with Israel…

(Cairo, Egypt) — It’s impossible to overstate how historic this is: a pious Sunni Muslim Arab President builds the largest church in the Middle East and gives it as a Christmas present to the Christians of his country. Can you remember the last time this happened? Neither can I. Yet this is precisely what happened […]

via Game-changing moment: Egyptian President Sisi makes history building largest church in the Mideast. Our Evangelical Delegation was honored to be here for the opening. A few thoughts. — Joel C. Rosenberg’s Blog

An important development in the light of the prophetical lightning strike upon Mecca’s Grand Mosque on the 14th anniversary of 9/11 and subsequent events two years later, as noted here. 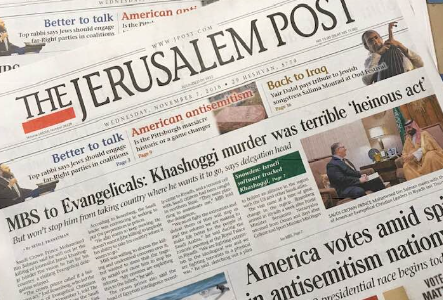 (Jerusalem, Israel) — On Wednesday, The Jerusalem Post published the first in-depth story on our Evangelical Delegation to Saudi Arabia, why we went, and what the Crown Prince told us behind closed doors.

As I told editors Yaakov Katz and Seth Frantzman in the Post’s offices yesterday, the entire meeting in the Royal Palace was on the record, except for what MBS told us regarding his views of the Arab-Israeli conflict. Our team took detailed notes and I provided some of the excerpts of our conversation to the Post. Here’s the article.

MBS TO EVANGELICALS: KHASHOGGI MURDER WAS TERRIBLE “HEINOUS ACT”: But he won’t let it stop his ability to take his country where he wants to go, the delegation head says.

Joel keeps us up-to-date on Iran (Ezek 38; Gog/Magog) and I note its response: supreme leader demands his own terms on the nuclear accord and one of its Revolutionary Guards leaders threatens US Secretary of State!

What’s fascinating is that most Arab leaders loved it.

I’ve spoken with two very high-ranking Arab officials in recent days about the speech delivered by Secretary of State Mike Pompeo at The Heritage Foundation on Monday morning. Both made it clear to me how deeply grateful and appreciative their countries are to the Trump-Pence administration for finally taking a bold, decisive, uncompromising position against Iranian aggression.

One Arab official told me privately: “It’s like the world is sane again.”

After watching Iran be feted and praised and rewarded and appeased by President Obama and his team over the past eight years, most Sunni Arab leaders are rejoicing that the U.S. is finally treating Iran as… 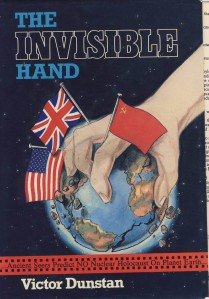 Thirty years ago my jaw dropped upon seeing an utterly amazing ‘coincidence’ between a book I was reading (The Invisible Hand) and a video of Iran’s elite troops rehearsing an attack upon, and liberation of, Jerusalem (see ‘Bio’ ). After many years watching the malign machinations of that regime, I’m pleased there’s now a non-Israeli world leader adamantly refusing to tolerate Iranian terrorism AND is already taking action – with Britain and France! – as well as knowing those ‘Twelvers’ hell-bent eschatological motives! [See Iranian Leader’s End-times Declaration & ‘Mahdi’ tag]. Here’s Joel Rosenberg’s on yesterday’s announcement:

(Jerusalem, Israel) — After a careful policy review by senior administration officials, and consultation with a wide range of U.S. allies, President Donald Trump today kept his promise by announcing the U.S. will terminate the nuclear deal that President Obama and Secretary John Kerry negotiated with Iran. The President also announced the U.S. will imposing […]

Continue reading at BREAKING NEWS: President Trump keeps promise to withdraw from dangerous Iran nuclear deal. Will impose severe new sanctions on Tehran. This is the right decision & the President deserves tremendous credit. But pray for peace in the region. Things might get bumpy. Here’s the latest. — Joel C. Rosenberg’s Blog

Global exposure and condemnation at long last of this nasty, pretentious Holocaust denier’s vile personality. Next, Britain’s Labour Party and its leader…?

(Jerusalem) — In January, I said on Fox News that “we may be heading for a post-Abbas era.” That day just grew much closer. World leaders from the United Nations to the European Union to the German government and the U.S. are publicly condemning a speech Palestinian President Mahmoud Abbas gave this week as “anti-Semitic,” […]

Click to continue reading at > BREAKING: World leaders from UN to EU to Germany & US condemn Mahmoud Abbas for anti-Semitic speech. NYT editorial calls for Palestinian President to step down. The post-Abbas era is approaching. Here’s the latest. — Joel C. Rosenberg’s Blog

Prophetic words and visions published herein are for each reader to weigh and test against holy scripture and with the Lord. (See An Introduction To Christian Prophecy at http://wp.me/P1Y1yB-2My and A Question On Prophecy within http://wp.me/p1Y1yB-3e7.)