A man’s heart plans his way, but the Lord directs his steps. (Proverbs 16:9)

For the eyes of the Lord range throughout the earth to strengthen those whose hearts are fully committed to Him. (2 Chronicles 16:9)

Many believers in Jesus Christ have ‘divine appointments’ when they happen to meet up with a stranger or friend who’s a brother or sister in Christ. It can be by ‘chance’ or else previously arranged but, whichever, it’s one of the most interesting and stimulating of times; hence, the term ‘divine appointments’. The divine appointment ‘par excellence’ is the unknown Samaritan woman’s unexpected encounter with Jesus at Jacob’s Well (John 4), about which I wrote in Does God make ‘jigsaws’ and arrange ‘coincidences’?

Many times have I observed that prophetic words and teaching as well as decisions and actions taken by myself and others happen by ‘coincidence’. They can even produce a chain, sometimes a linked network, of ‘coincidences’ as though a ‘spooky action in time’ (to play on Einstein’s surprised remark of “spooky action at a distance” to new quantum physics’ theoretical trans-galactic links between sub-atomic particles and light photons!). 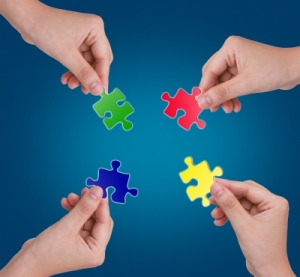 When ‘coincidences’ are relevant to our relationship with God and we discern His hand or instruction in events, then many refer to them as ‘God-incidents’.  Each event, with its associated insights, is recognised as being related to a previous event – eg. had I not been there then this would not have happened; or, had I not done this then that would not have been understood.

For Christians, it’s a supra-natural part of being born-again because our lives should be  influenced by ‘the wind of the Holy Spirit’, as in John 3:8 where Jesus explains; “The wind blows where it wishes, and you hear the sound of it, but cannot tell where it comes from and where it goes. So is everyone who is born of the Spirit.”

Furthermore, I’m reminded of scientific, physical laws of cause and effect as well as of simple mathematics. And some coincidences are no simple, linked chain but more like a tree, its trunk representing the observed sequence of events. In 2012, after having done a ‘mistaken’ search on the web,  I observed one such trunk had shot out two branches, each with its offspring – in all, over twenty ‘coincidental’ events!

Therefore, we can understand how this concatenation, or series of over a dozen related events, can be regarded as a distinct entity. It may be hard for non-believer and believer alike to even consider that the whole is pointing to the Living God – if not coming direct from Him.

One such happened during the Queen’s Diamond Jubilee (here). I described it like an orchestra, where the conductor directs various instruments and singers playing at the correct time and rhythm to make wonderful music. Only weeks later I heard Ian Clayton use the same description for coincidences. He’s of the opinion it’s a way the Spirit of Wisdom helps and tutors us, as Mike Parsons writes in No longer a slave, but a Son.

Within days of being amazed by unexpected events in June 2012, I was given a clear confirmation of their ‘mechanism’ from a well-known prophet. In the Right Place at the Right Time tells about Dr Sharon Stone teaching on “Four Biblical Laws for Advancing the Kingdom”, one of which she described as follows:

Serendipity – “Amazing, accidental discovery! Wow! No matter what we do and what God does He surprises us with lots more – eg. Pentecost”. Let’s look at Ephesians 3:14-21 – verse 20 in the Amplified Bible reads:

20 Now to Him Who, by (in consequence of) the [action of His] power that is at work within us, is able to [carry out His purpose and] do super-abundantly, far over and above all that we [dare] ask or think [infinitely beyond our highest prayers, desires, thoughts, hopes, or dreams] – 21 to Him be glory…. (my emphasis)

BRIDGE OVER ‘THE POND’

Once or twice in 2013 I blogged that a theme or principle taught on a Sunday morning in our fellowship in England, was also covered, or referred to, during the afternoon’s viewing of the morning service live from Church Of His Presence in Mobile, Alabama.

Sometimes the reference in CHP would be made the next Sunday but, nevertheless, this has happened more times than I can recall. Neither church or leadership are associated in any way and the only connection is ours as lay members.

Therefore, I refer to these kind of ‘God-incidents’ of teaching and prophetical words as “Bridge Over The Pond”.

A more recent example is what I either heard or read on each of three consecutive days; from Friday 10th, Saturday 11th and Sunday 12th April 2015, as mentioned in my covering comment to The Battle For Inheritance.

An even more amazing instance a few days later between different parties caused both to marvel. What happened during 16-17th April is recounted in Surprising Endorsement of ‘The Fellowship of the Secret’.

For examples of more occurrences of this phenomenon, click the ‘God-incidents’ tag. The latest usually heads that listing.

So we see how God-incidents fit into a distinctive learning pattern that’s quite personal and which can be likened to an ‘invisible jigsaw’ (click for brief introduction and more).

Dig deeper into the nature of coincidences as ‘God-incidents’ and their connection to Time by reading these brief overviews in sequence :

Illustrations are supplied by Freedigitalphotos.net and are by courtesy of: