SERENDIPITY STRIKES AGAIN !! (Definition: the happy occurrence of chance events.) But when such events are laden with surprising illumination of a spiritual and intellectual nature, they’re regarded as from the Living God; that is, ‘God-incidents’.

This time it’s all about the Queen’s bells!  Or more particularly, the especially significant role and effect they have upon our nation and of which only a few folk have been aware.

Those who attended or watched yesterday’s grand spectacle of Her Majesty’s Diamond Jubilee pageant on the River Thames saw – and heard – a huge flotilla of 1,000 vessels (click to see selection of photos, courtesy Daily Mail Online). 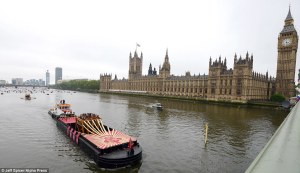 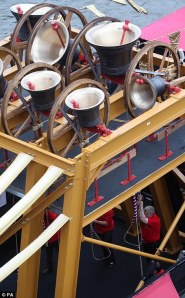 The Belfry barge carrying eight enormous church bells led the procession in one of the most spectacular nautical events seen in London for over 350 years.   They pealed all along the 7 mile route and were joined by church bells ringing out in reply across the City of London as the pageant regally proceeded to Tower Bridge. (Daily Telegraph’s video-article on the rehearsal for bell-ringing gives a feel for their sound. I had hoped the BBC’s live coverage would have returned to their on-board presenter, showman John Barrowman, but his personal video blog conveys a sense of the very deep impact those bells can make.)

And today, thousands of beacons are blazing across the land, the last one being lit by Her Majesty at the close of the massive, open-air Jubilee Concert held at the Queen Victoria Memorial and The Mall outside Buckingham Palace!

Personally, I almost missed the significance of all this but ‘God-incidence’ happened – thank you Lord!.  Our recent holiday had left us oblivious to all the news of this national event. Getting back online, my priority was to email church friends about the Olympic Torch Relay’s praise bus.  My email was similar to this blog’s posting below but included information for prayer purposes about the spiritual aspects of the Grecian flame. Just as I was about to hit the send button, I recalled I’d brought home a ‘flyer’ about a stadium prayer event in Torquay with the intention of circulating that news too.  How best to do that?  Simple – add one-line PS with a link to the organiser’s website… really??

As no website was stated, the leaflet’s logo should enable me to ‘google’ for a link and I spotted the name BUT I somehow hit a different site and got ‘wrong’ information – what popped on-screen was all about bells!  Not what I wanted and there was lots to it – but a quick glance gave the game away!  Instantly, I knew this was most important and ran off hard copies to read as soon as possible, but which turned out to be the day after next.

Should you be interested in checking it out too, then here’s the sequence of what was revealed:

I’d recommend that not only Spirit-filled Christians but also anyone with a supernatural understanding visit these links.  [Beni is in charge of Bethel Prayer House, Redding, CA.]  Believers in Jesus Christ will want to read, listen and consider this information carefully.  So thank you, Stewart, for your blog’s post and a further link.

This is most exciting in view of the gathering pace by which things are happening. In Part 2 I share my understanding of this information, its fascinating connections as well as a vivid validation of the spiritual significance of the bells…and there’s more!

3 thoughts on “The especial significance of the Queen’s Diamond Jubilee bells: part 1”