Do you know that masses of Muslims are dreaming of Jesus Christ?  According to Islam he was just a man like the Old Testament prophets, but millions are learning the truth of his divine identity through direct personal encounters!  (Relates to a vivid dream-vision on 6-7th January 1992 about the fall of Islam, as recounted here.)

That happened to me too!  As an anti-Christian deeply involved in occultism and the ‘New Age,’ I had a totally unexpected encounter with Jesus as I was about to die…!! 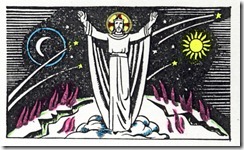 The essential details were told for my baptismal testimony and recorded for the greater glory of God in 1992 as More Than A Dream.  Upon launching this blog in late-2011 the account was published herein as a warning about our post-mortem existence – Death or Destiny? Choose Wisely.  As twenty years had elapsed, I was able to include events that verified that truly awesome overnight visit.

During that period I stayed away from digging up my ‘old man’ but I was asked to give my testimony at a ladies’ breakfast. Also, as the fuller story may help those who don’t yet know the depth of God’s love for them personally, I expanded it into 7 installments for the encounter’s 24th anniversary in 2013 (see No 7 and My Journey Into Freedom).

The essential parts were extended and re-blogged in April 2017 in response to a visitor who remarked my brief reference to Islam indicated complete ignorance of it, and of deism in particular. So for the record, this true story needed to augment and clarify such details. In September, serendipity necessitated an insertion within ‘First Contact’ section of the second part.

It’s re-published two years later for the reasons given in One’s Destiny in Three ‘Bites’, and over weekend of 13-15 September 2019 main parts re-issued on 30th anniversary.

Therefore, I appreciate your taking the time to read why I believe in Jesus Christ and how invisible chains binding me got broken. These links take you into my journey.:

An Effect of Church Divisions:

A Couple of Divine Appointments:

Listening to God and My Freedom:

After those events it was important to demolish every foothold the enemy of our souls had in me. This involved repentance and renunciation plus some deliverance ministry and I was mightily blessed with a baptism in wonderful Holy Spirit, the effect of which lasted 40 days.

Other than the Holy Bible itself, the listing below is of some of the books that helped me immensely as a new Christian born afresh by Holy Spirit’s gracious presence. [Prior to then a few books had given me a good background on biblical and Christian history; especially on the legends of Jesus’ disciples visiting the Marseille area of southern France and Roman Britain at Glastonbury; plus The Invisible Hand, which recounted predictions by ancient seers for the modern Middle East, as outlined in my Bio Info.]