COPY of pre-blog email (as in ‘About’) entitled Intercession Request  – to read it better click upon and enlarge image. The main points covered therein are.:

> introducing to Dr Mike Evans, confidante to many Israeli leaders

> unprecendented disasters whilst US discusses dividing up Jerusalem!! 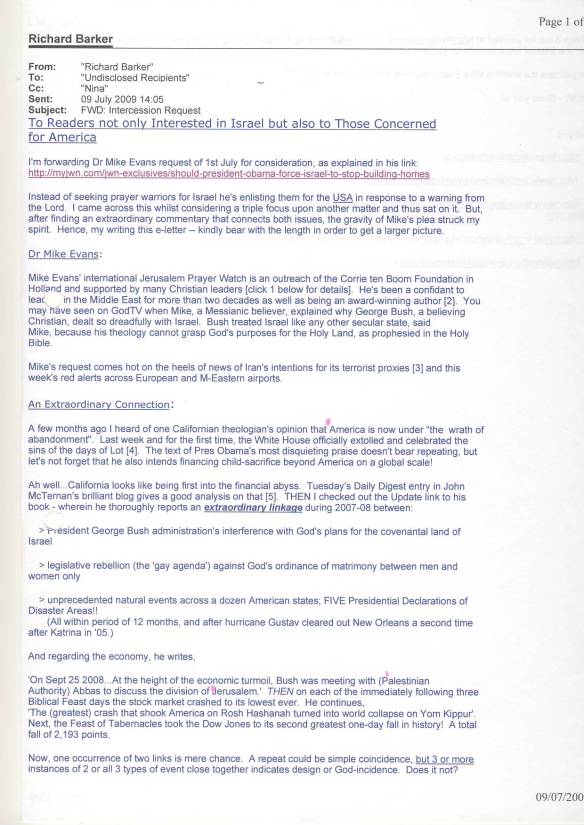 A ‘behind the news’ exclusive report of how Iranian dissidents’ internet ‘coup’ got decapitated gives a glimpse of what’s possible now, and may explain why our embassy was singled out by the ‘muddled mullahs’:

“Tehran has vented its ire on Britain because it is accused of providing the organizers of the dissident movement with London telephone numbers to circumvent the deliberate slowdown of online traffic from inside the country. These numbers gave anti-government activists instant, direct links through Western Internet providers for getting their messages out to the world. Iran suspects they were laid on by British intelligence. Eventually, the British lines became jammed by overload.”

Oh, by the way – ID cards are NOT yet scrapped:

“…MPs are shortly…to consider the Identity Cards Act 2006…Regulations 2009. For those who swallowed the guff that the ID project had somehow gone away after the statement last week from Alan Johnson, the new Home Secretary, these new laws might come as a surprise…” Read in full > http://www.telegraph.co.uk/comment/columnists/philipjohnston/5754900/Laws-that-slip-in-the-back-door.html

Isn’t it wonderful to be known by and watched over by the Living God?

The Lord keep us and bless us

> Obama’s standing as professor of law debunked by Caroline Glick’s expose of his administration’s breach of both international and domestic US laws in supporting terrorists!  (See Barack Obama vs. International Law)

Prophetic words and visions published herein are for each reader to weigh and test against holy scripture and with the Lord, and pray into as led. Similar applies to news/politics, which is presented for information as well as prophesied exposure of evil. (See An Introduction To Christian Prophecy at http://wp.me/P1Y1yB-2My and A Question On Prophecy within http://wp.me/p1Y1yB-3e7.)