To gain a full understanding of this material first read the lead-in at 12th Anniversary… As in the introduction to Part 1 of a long draft split into two contrasting parts per the scripture and Jesus’ action plan, we now consider the ‘wheat’ (screenshot is ‘God-incidental’):

THE PARABLE OF THE WHEAT & TARES EXPLAINED

37 ‘He answered and said to them: “He who sows the good seed is the Son of Man. 38 The field is the world, the good seeds are the sons of the kingdom, but the tares are the sons of the wicked one. 39 The enemy who sowed them is the devil, the harvest is the end of the age, and the reapers are the angels. 40 Therefore, as the tares are gathered and burned in the fire, so it will be at the end of this age. 41 The Son of Man will send out His angels, and they will gather out of His kingdom all things that offend, and those who practice lawlessness, 42 and will cast them into the furnace of fire. There will be wailing and gnashing of teeth. 43 Then the righteous will shine forth as the sun in the kingdom of their Father. He who has ears to hear, let him hear!” (Matthew 13 NKJV)

That news of the SCOTUS decision to ignore election fraud and the great disbelief and disappointment of attorney Sidney Powell, as in Part 1, got tempered by another aspect of this national debacle. It’s that aspect about which I was seeking the Lord, in view of my discerning both contrasting items’ similarity to the parable of the wheat and tares, especially in regards to how the Lord may intervene, as well as a possible political action plan that aims to make a separation too.

After blogging ON-CUE: a ‘queue’ of buried truths begins to emerge I began a very brief series of ‘Q’ posts by introducing the work of British computer scientist Martin Geddes and his precision explanation of what went wrong in November’s election. If this is new to you, it may help to first be briefed on The Digital Coup and the Great Deception, as in my ‘Q-one’ posting before proceeding further.

After reading that article I needed to learn more, downloaded his truly exceptional free document 10 Essays on Q, written 2018 to 2020. My hard-copy of its 40 pages bears many paragraphs daubed in highlighter yellow with marginalia of big pink asterisks!

I’m delighted to learn from Martin about the ‘Q-Anon’ phenomena’s origins and activities, especially in confirming my conclusions from having observed the Obama administration since I started writing in 2009, as well as more-or-less endorsing William Koenig’s insights from within the White House press-room.

One of the things I learned is that a great deal of ‘Q’ strategy is based upon a famous work that Tim Shey refers to in his recent comment:

‘I love Sacchetti’s quote: “Trump is beyond Sun Tzu”. Sun Tzu, wrote the classic THE ART OF WAR, which I read a number of years ago. Halfway through (however), the Lord told me to stop reading Sun Tzu’s book. I asked the Lord, Why? (because it is an excellent read). The Lord told me, “The man who obeys the Lord defeats Sun Tzu every time.”

‘Praise the Lord! Sun Tzu was a great military strategist, but the Lord can run circles around Sun Tzu any time He wants to. Glory to God in the Highest!

Now to Martin’s latest explanation of events on ‘The Bidan (sic) Show…‘ I’d already perceived the possibility of several hidden activities and so am pleased Martin expands upon them and more in some depth, viz (emphases mine):

‘The establishment of a new free American Republic involves a cutover from the old and bankrupt corporate entity that the “Joe Bidan” movie character heads up. It cannot be done instantly, and those who are losing power would love to create chaos and deny the public their rights and inheritance. Capturing and removing the Deep State isn’t enough; you also need to deliver a functioning society afterwards.

‘There are very specific benefits of Donald Trump being “off stage” during this transition period:

‘Finally, and most importantly, it sets up the total destruction of the Mockingbird Media. They are fully invested in promoting “The Bidan Show” as objective reality. But as with the Truman Show, there is a moment when it “glitches” and the stage set is visible. It only takes the President Bidan actor to remove his latex mask on TV, and it’s all over, as the illusion machine is shattered.’ 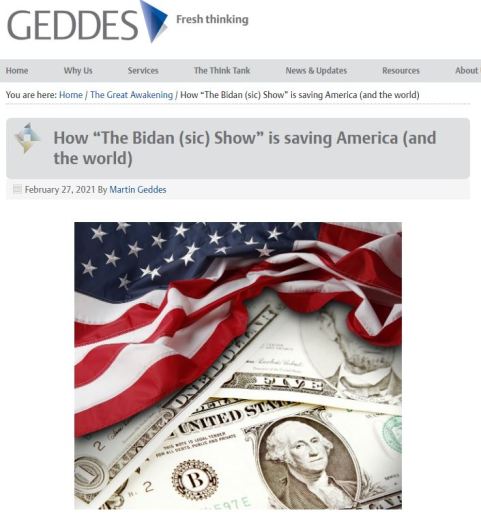 Am I alone in perceiving how the final point above is rather similar to Jesus’ describing the removal of toxic tares?

And let me give a few more quotes that lead into a notion similar to that of prophecies about full-scale revival and global harvesting of ‘wheat’ that Jesus sowed; a ‘Great Awakening’ – also a further allusion to first separating tares out from wheat:

‘So the “big picture” is that we are watching a total reboot of America, and consequently the world. When a computer reboots its operating system goes down a series of “run levels”, and then back up again…

‘Having Donald Trump immediately be re-elected in November would have been a strategic failure, even if it offered a temporary emotional release. It would have perpetuated the fake corporate government, and sustained the illusion of its legitimacy. The two real tasks are to prevent a descent into civil war in the short run, and to prevent a recurrence of this horror show in the long run…

‘A lot of arrogant and prideful dangerous morons are about to get the hardest lesson of their lives as their conceit and carelessness is exposed. Academia is set for revolt and revolution, mass media for implosion, “sick care” medicine for replacement. It’s an “apocalypse of authority”.

‘The Q military intelligence operation has prepared Patriots for this time of upheaval — The Great Awakening. We are given objective reasons to believe this is a carefully planned process with a benevolent outcome, so we do not engage in our own insurrection against an illegitimate entity in Washington DC. …‘

In my humble opinion, therefore, there’s a great deal of harmony between Kingdom principles and goals and the purposeful and apparently righteous aims of a so-called conspiracy movement.