Not bothering to note today’s date, my intended online priority after the days morning tasks was to respond to a reference to number 11’s meaning by Jonathan Hill in his weekend email. BUT after opening my in-tray, what then dropped in from Ben Kay in Plymouth ‘God-incidentally’ highlights ’11’!! “ACE, absolutely brill Ben”, I immediately respond in my seeking his permission to copy; and so he puts it into perspective:

“Glad that this email has hit the mark. It was interesting how it came about as I had no intention to write all these things until late last night when I sensed the Lord reminding me about the eclipse and prompting me to write an encouragement. It took a few hours but managed to get it sent out this morning thankfully. I meant to be writing… but sensed this interruption to my plans last night were from the Lord so decided to go with the flow…!”

“LOOK UP…FOR YOUR REDEMPTION DRAWS NIGH!”

Normally I simply send out dates and information about prayer meetings (such as the next PRAY UK meeting on 22nd August!)

However, this is a simple encouragement to keep pressing on when you may be feeling the pressure of life… to keep on looking up when you might be feeling down…and a reminder that we are held in the palm of the One who holds the whole world in His hands.

‘…I press on to take hold of that for which Christ Jesus took hold of me…Forgetting what is behind and straining toward what is ahead, I press on toward the goal to win the prize for which God has called me heavenward in Christ Jesus.’ (Philippians 3 vs 12-14)

Last night, I remembered that today is a special anniversary for those in Devon and Cornwall who, 21 years ago today, witnessed the magnificent spectacle of the 1999 solar eclipse.

Indeed, you may have seen the special marker that was placed near Plymouth Hoe (by the cannons on Madeira Road) to remind us of this special moment. It is in the shape of a cross on the pavement.

‘X’ marks the spot where at the 11th minute of the 11th hour of the 11th day of August 1999, the sun was turned to darkness and the moon turned a blood red colour above Plymouth and the surrounding region, and there followed 2 minutes of eerie darkness in the middle of the day, before the light of the sun broke through once again.

As I look back on this day with a sense of awe, I’m reminded of who it is that not only created the earth, the moon and the sun but actually brought them into alignment and scheduled this special moment at the beginning of time. For no solar eclipse randomly happens but each one was timetabled from the moment of creation.

‘And God said, “Let there be lights in the firmament of the heaven to divide the day from the night; and let them be for signs, and for seasons, and for days, and years…”‘ (Genesis 1:14 KJV emphasis mine)

By all accounts (eg. Wikipedia’s Solar Eclipse of 11th August, 1999), this was a special eclipse. This was ‘one of the most-viewed solar eclipses in the whole of human history’ and the first that could be viewed from the UK since 1927.

As illustrated therein, the total eclipse started in the Atlantic (not far from where the Mayflower’s Pilgrims first settled), speeding across the ocean at around 2000km/h before making landfall, crossing both Devon and Cornwall. Interestingly, the eclipse then went from here to have an impact on the rest of Europe as well as parts of Africa, the Middle East and Asia…2 billion people in all!

There are many prophetic words that have been spoken about the region over the years indicating that God is about to do something special. Given that an eclipse can also be defined as an ‘over-shadowing’, perhaps God’s Spirit is brooding and getting ready to bring forth ‘fullness of life’ in this region as expressed in John 10:10’s  “I have come that they may have life, and that they may have it more abundantly”.

Furthermore, perhaps the precise time and direction of the eclipse over Plymouth and the region indicates that an end-time revival of great magnitude is coming that will have an impact on multitudes throughout the nations.

But if life is tough right now, perhaps we just need to hang in there. In the natural, there is much pressure on a baby in the birthing canal just before it is born.

‘We are pressed on every side by troubles, but not crushed and broken. We are perplexed because we don’t know why things happen as they do, but we don’t give up and quit. We are hunted down, but God never abandons us. We get knocked down, but we get up again and keep going.’ (2 Corinthians 4 vs 8-9 TLB)

God is in control, even though we may feel everything is out of control.

‘and we know that in all things God works for the good of those who love Him, who have been called according to his purpose’. (Romans 8 v 28)

Not all things are good…but in all things, we trust God is working things out for our good and birthing His purposes and plans in our lives.

When we’re in the thick of it, sometimes it is hard to see the bigger picture.

Perhaps this recent prophetic word from Veronika West entitled, ‘It’s Time, Destiny’s Clock is Ticking‘, will serve as an encouragement to ‘look up’ at this time and keep ‘watching and praying’…

Here’s an excerpt from this relatively short word:

‘So stay watching and praying in these days, as the Winnowing Winds of My Spirit now blow upon the threshing floor of the Nations. Listen and pay close attention! Tick, tock, tick, tock…the sound of destiny’s clock can be heard in the realm of the Spirit. Do you hear it? Are you ready? Are you aligned and rightly positioned? Are you walking in time with My Spirit?

Beloved…See! For this is a kairos time…an appointed time in the earth…a time of divine Shifting, Sifting, Scattering and Separation has surely begun…for the Nations at a divine tipping point are now being Shifted…the wheat and the tares are now being Sifted…Yes!…and the demons of hell are now being Scattered and the goats and sheep Nations are now being Separated…Watch! As the Winnowing Winds of My Spirit now blow forth upon the Harvest fields of the Nations…Beloved, Get ready!!

This follows on from a recent dream Veronika West had in June 2020 (Hourglass of End-time Harvest).

Veronika explains, “This dream came with such an urgency of the times and the need to begin to cry out for the nations of the earth who are in the valley of decision. I believe this dream speaks to the 11th hour. A kairos time in the earth. An appointed time of the End-time Harvest!”

The details of the dream and Veronika’s interpretation take a little longer to read than the above prophetic word…but it is well worth reading and reflecting upon.

The dream concludes with the following words:

“Watch and Pray! For but a little while longer the Golden Revolving Door of The Ages and of Eternal Destiny stands open before the nations. As the days of My Grace and Mercy are poured out upon the nations, watch! For the time is here, for the 11th Hour Harvesters will herald the birthing of a new great awakening on the earth!”

Veronika’s dream reminds me of an encounter I had with God after attending a prayer meeting at Plymouth Christian Centre back in 2012. I was left with a clear sense that we’re living in the closing age of time before Jesus returns for His bride.

Read more about this ’11th hour’ encounter HERE in Why ’12am CRY’? and listen-read-watch RT Kendall explain more about ‘What is the Midnight Cry?’.

Anyhow, this has now turned out to be a much longer email than originally envisaged, so I’ll finish here with a couple of verses encouraging us to rouse to the reality of the time we are living in…

‘Besides this you know what [a critical] hour this is, how it is high time now for you to wake up out of your sleep (rouse to reality). For salvation (final deliverance) is nearer to us now than when we first believed (adhered to, trusted in, and relied on Christ, the Messiah). The night is far gone and the day is almost here. Let us then drop (fling away) the works and deeds of darkness and put on the [full] armour of light. (Romans 13 vs 11-12 AMPC) 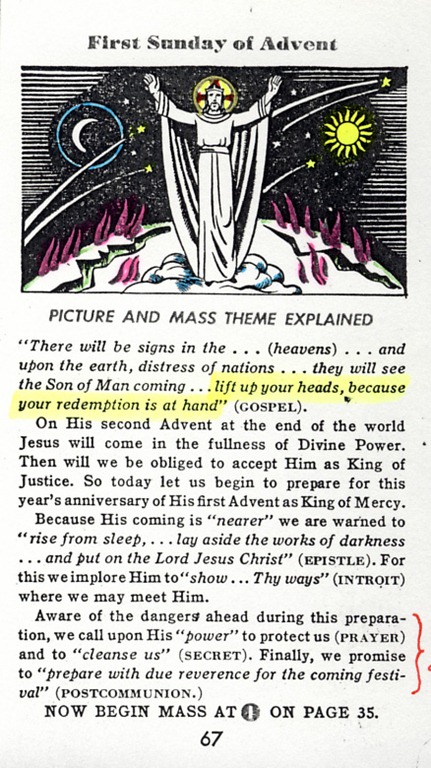 CONCLUSION: THE LORD IS GETTING OUR ATTENTION – HAS HE GOT YOURS?