Astonished! And doubly so! LOL!  Not by events, actions or words – but by a map on Friday.

And astonished today too!  First thing, I got an email from the designer of a map that I’d started writing about yesterday – he too was working on the same map yesterday!

Christians have no excuse for not knowing End-times prophecies began coming to fruition a hundred years ago in the Holy Land. After learning about them 30 years ago and then being born-again, I noticed the pace of prophecy picking up around the Millennium. In launching this blog I referred to the importance of eschatology and the acceleration in End-times – and others more qualified than me were saying so (Not many people know this). Now, we’re witnessing the modern manifestation of the battles foreseen in Daniel chapter 8, not between ancient empires but their descendants.

But now, in 2015, the manifestation of yet-to-be fulfilled Biblical prophecies is rapid!

At morning coffee last Friday we quickly scanned our newspaper’s front page. Nina tore out the crossword and I went straight for Con Coughlin’s op-ed buried in the middle pages. This expert with 25 years experience on international terrorism and Middle-East, writing in Saudi airstrikes add fuel to bitter rivalries about Yemen, asks “Whose wars are we fighting in the Middle East?” 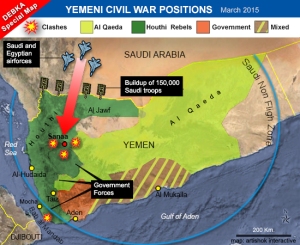 It was a welcome rest after a busy day getting a long post published as I’d worked on it for three weeks. But within an hour incoming news needed to be inserted. It was about Sunni Arab leaders taking military action but without any reference to Washington; and my post of August 2010 had referred to the diplomatic unease. As I like maps I’d noted the associated map shown here – click thereon for link to Special Report.

So that was at the back of my mind on Friday. But now I saw, slap-bang in the middle of Con Coughlin’s piece, this huge map taking up half the width of the Telegraph broadsheet page. It depicts countries following different forms of Islam: 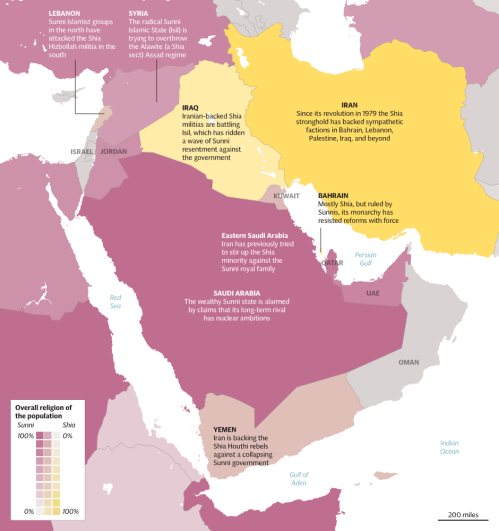 In connection with that Thursday post’s reference to ‘squabbles over succession’ upon Muhammad’s death, Con explains how this brought a rift in Islam,

The split between Sunnis and Shias begins with the death of the prophet Mohammed in 632 AD, and the battle to succeed him as the first Muslim caliph. Sunnis say his brother-in-law Abu Bakr was the rightful heir; Shias say it should have been his cousin and son-in-law, Ali. It came to a head at the Battle of Karbala in modern-day Iraq in 680 AD with the death of Ali’s son Hussein at the hands of the Sunni army – an event which is still commemorated today.

However, my immediate first impression was of this map’s similarity not to the Debka map but to two others shown in Daniel Revisited. Mark Davidson illustrates how Old Testament prophet Daniel’s visions of far-future battles between powerful nations, as symbolised by a ‘ram’ and a ‘goat’ in Daniel 8, may relate to ones yet to come between Shiite Iran and Sunni Egypt, Turkey and Arabia. Upon checking this, I was again astonished to note the emphasis of Iranian action towards Yemen, as below:

For an introduction to Mark’s important thesis read Four Signposts of the Books of Daniel and the Apocalypse (highly recommended overview).  His latest sound analysis on Iran is at Daniel 8 and the First Signpost.

Another article in Friday paper’s business section about a war between Saudi Arabia and Iran raising anxiety over oil prices reminded me of what I’d suggested in July 2014. On this I concluded Middle-East events and fulfillment of Bible prophecy as follows:

In my opinion, we may be about to witness major upheavals that will affect not only the ancient world’s centers of civilisation but also the modern world’s global petro-economy.

I had in mind that hostile disputes could lead to Iran closing the Straits of Hormuz into the Persian Gulf, thereby stopping international shipping of oil. Now, if Yemen falls to Iran then its proxy forces can overlook the Bab el-Mandeb straits and control the entrance to the Red Sea. Thus, Iran could control both corners of the Arabian peninsula and threaten the global economy. This would turn existing economic sanctions against Iran on their head!.

That post was followed a couple of months later with Mark’s The Petrodollar’s creator: Iran greater threat than ISIS. He quoted Henry Kissinger as saying,

“There has come into being a kind of a Shia belt from Tehran through Baghdad to Beirut…This gives Iran the opportunity to reconstruct the ancient Persian Empire — this time under the Shia label — in the rebuilding of the Middle East that will inevitably have to take place when the new international borders [are] drawn. The borders of the settlement of 1919-’20 are essentially collapsing.”

The latest from respected financial commentator Ambrose Evans-Pritchard is that Saudi oil infrastructure is at risk as Mid-East conflagration spreads!

What is certainly happening is the strengthening of the Arab League under the direction of Saudi Arabia. David Goldman, a Senior Fellow at The London Centre for Policy Research explains in The Middle-East Metternichs of Riyadh that the 10-nation coalition that Riyadh assembled to counter Iranian intervention in Yemen has a broad mandate to contain Iran throughout the region. Most surprisingly this includes Sudan and Quatar. And Pakistan is now sending its troops, as reported here yesterday.

More emphatically, Goldman concludes that Riyadh acted without the help of the US and in direct contravention of American policy of bringing Iran into Mid-East regional security architecture as an important player.  Readers who like in-depth background will find his article highly informative. (Austrian Chancellor Klemens von Metternich introduced the Congress System of diplomacy to balance imperial power after the Napoleonic wars.)