A couple of points struck me upon reading Wanda Alger’s blog upon her friend Lora Allison’s dream of how Donald Trump’s destiny will be revealed. One point was when she saw a spiral stairway because 7 years ago I’d had an insight about the nature of Time and thus wrote several blogs on the subject. The result was my setting up a static reference hub in the blog’s menu, viz:

Time is directly related to this blog’s oft-recurring topic of ‘God-incidents’, ie. serendipity, or ‘happy coincidences’, especially those connected to our relationship with God. For a brief introduction to this visit the ‘God-incidents’ hub, and many posts may be read under that term’s tag.

More importantly for our present purposes and as an introduction to the spiral nature of Time, where its passage may be compared to a corkscrew, I invite you to read what I posted on 5th March 2015 – especially as it leads into considering Revelation 13 and strategies of the hater of humanity relating to the Middle-East, and of which more very alarming ones are being exposed in Britain and USA.

May the Lord bless you as you consider…

THE ‘ENDGAME’ GETS RAMPED UP ANOTHER LEVEL [part 1 of 3]

Bells start ringing that we’ve been here before – and at this time of year too! – like fresh, bright-yellow daffodil bells I see springing up outside!  Let me to add to what others are doing as ‘prep’ for 2015…

Time is non-linear.  Our analytical mindsets think time’s a straight line. Often we see time-lines listing events in history – or use one for our own life.

The passage of time and events is seasonal; ie. cyclical. I regard time like a spiral for, when considered dynamically under the interaction of various influences, it’s just like a corkscrew being turned. Nature provides an excellent example that carries information – the DNA spiral.

Another example: on a spiral staircase we pass by different walls. If it’s in a castle turret there’d be a doorway on each floor and in the same vertical wall of the well. Regard this wall as a certain kind of event and note how it connects with us, or is relevant to us, at different times and levels.

Hence, various types of event can crop up in a cyclical pattern of repetitions at different levels and show some development has taken place. So it is in history and with God’s plans too, could we but be aware, or receive revelation.

Before I heard about Jonathan Cahn’s US best-seller The Harbinger, I’d outlined the Biblical analysis of historical and financial cycles in one of my first months’ blogs,  Points to Ponder 2011-2012. (For more see below.)

Last week I promised to reveal how a possible option between either one of two weeks for surgery affected, or even enabled(!), further insights into something we’d recently mulled over on this blog – Satan’s strategy to avoid the Lake of Fire.

Please accept my apologies for not having done so in ‘the next post’. So much was still surfacing – from both the past and the present – that I had to take stock.  To my great surprise a cycle of events was laid bare. 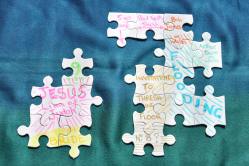 Once again, more of the ‘Invisible Jigsaw’ is appearing, as blogged extensively in 2014  (click image to read about its themes).

So, I’ll explain this year’s view of ‘the grand design’ for you to follow my logic. Let’s look at the jigsaw pieces we’ve placed down thus far.

I mused upon how Satan could have adopted tactics to avoid his destined demise in the Lake of Fire and a progression of ‘pieces’ was revealed as follows:

Furthermore, accelerating developments in the Middle-East only add to the mix. Therefore, an appreciation of my background in this will be of some help.

Pertinent to today’s issues is a personal event that hooked me into Eschatology, as well as subsequent developments, viz:

As stated in this blog’s Welcome, the Iran-Iraq war opened my eyes as an unbeliever because I’d been given an unusual ‘secular’ book on OT prophecies of modern events. Whilst watching a TV documentary about that war I flicked through the brand-new book and noted references to the significance of Jerusalem.  THEN I heard the TV narrator speak about, and showed, elite units from both sides rehearsing together an attack upon Jerusalem! – despite being at war with one another!! So I’ve since kept an eye on international affairs.

Once again, conflict in Iraq involving Iran is in the news because of ISIS’ invasion of Iraq in 2014.

Six years ago last weekend, on 28th February 2009, I started what would become a series of private emails to Christian friends and church leaders drawing attention to the plain fact that events are fitting more clearly into Biblical prophecy.

We’d already debated the Lakeland, Florida, outpouring as I’d known of Todd Bentley before-hand. However, the new direction had become abundantly obvious and so I emailed them, The ‘Endgame’ is now in play.

It was only much later, in Autumn 2011, that the Lord prodded me into going public with this blog. (If you’re interested in numbers; the 700th post is one the above ‘insights’.)

As said, significant End-time events began to escalate. To appreciate how they’ve again become ‘hot potatoes’ you may like to dip into later emails of May and July 2009 noting especially as below:

An entirely forgotten idea privately posited with those friends popped up again unbidden in the last fortnight. Part 2 will show how the shuffled surgical schedule reported in The Shepherd, the Shadow and the ‘Spread’ fits into our ‘jigsaw’.

I hope you’ll have time to dip into those archived papers whenever possible.

[‘Spiral Stairway To Clouds’ by Victor Habbick and ‘Spiral Stairs’ by Franky242, courtesy of Freedigitalphotos.net]