Thursday again, another day devoted to ‘unblogging’ my brain as I spend the daytime at the desk. What’s in the pipeline gets jotted on a small piece of paper as an action list.of over dozen items. Today, however, it’s been mentally composed pre-dawn whilst awake and it feels very much like I’m a pilot being sent on a night raid during World War II

The mission and target is clear and planned in advance for dropping metaphorically explosive spiritual insights into events that have transpired.  That is, prophecies which are now proving true, or are in process of fulfillment – even with media using the same language!

As you’d expect, those ‘raids’ happened recently when I meet opposition – friends say, “You’re over the target!”  And then comes reinforcements in the form of more insights or GPS (Global Prophecy Signals) confirmation or, as of late, material contribution.

Also, whilst ‘homing in’ I need to avoid distractions – as happened last Thursday as I sat at this desk. Early last week I’d been in an online debate in a UK prophecy group, which got contentious over American prophets’ supposed false prophecy based upon political interests. I’d reminded them that issue over Trump’s second term had been thrashed out a year ago – but was not entirely closed. I reminded folk of the importance of unity and avoiding discord.  On Thursday I got a response requiring attention before my long weekend. It took up a fair chunk of the day and I wasn’t able to action all I’d planned. I did, however, thank my brother for experience had shown me the Lord blesses with more goodies, as for example when I welcomed new subscribers and immediately got a God-incidental ‘Warning’ confirmation from Veronika West!.

That necessary divergence meant I was unable to add a specific footnote to psting her latest on a New Kingdom Era and ‘Evergreen’ – BUT long-standing subscribers in New Zealand and South Africa picked up on it.  Alex had seen a natural manifestation of this, and Roger provided a full account of what I’d wanted to add about the emblem for An Appeal To Heaven – Praise the Lord, He IS SO good!

Yet the flack kept coming, so I really must be homing in and over the target!

To continue with my planned posts I need to find a comment within my Farcebuk, which meant opening up my account settings via phone – then I saw the ‘badge of honour’: 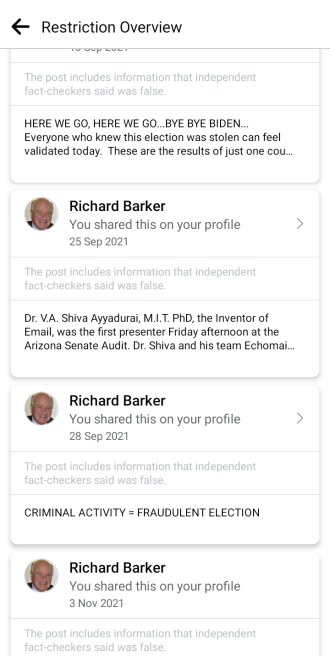 I had no knowledge of this ‘shadow banning’, although had seen those warnings, the last of which may have been any of these three blogs copied over to Farcebuk (linked images):

A minor stomach upset slowed me down in catching up on Monday, but it wasn’t too time consuming as it was copy-pasting Roger’s item on the ‘Appeal’ as well as Neil Mackereth’s latest AND confirmatory article The Great Divide, plus that terrifying dream of denizen’s of Hell seeing into Heaven.  Then I went offline for the rest of the day.

BUT maybe demons were reacting! Look at happened when I put my phone to bed, as told in this posted to Facebook 24 hours later:

One of my regular commentators Elaine Venning responds, “May it be a sign of blessings to come. You must be on target or this attack wouldn’t try to stop you!”

And it’s VERY hilarious in view of my wife’s late father’s wartime service!!

1 thought on ““Over the target, am encountering enemy flak!””