First, check these extracts with emphases added on the need for humility in Britain, as told in prophetic words brought by Emma Stark of Glasgow Prophetic Centre. On 20 November 2017 she reports deep disarray in devil’s domain…

‘And then the Lord started to speak to me about Brexit, in the middle of all of this. And the Lord said this: “You” (you collectively, like, all of us – family) “have prayed for a revival and awakening and reformation in the UK for so long.” And the Lord says, “I have heard the prayers for revival and awakening and reformation.” (but) “I couldn’t come as close as I wanted to, to the UK, because I had to resist her because she was proud.”

‘And I heard God say this: “I will allow a bad deal for the UK in BREXIT, and it will bring a humbleness to the nation. And in the humbleness it will be an answer to your prayers, because it will break Leviathan off you. And in the breaking of Leviathan”, the Lord says, “I will rush towards you with revival and awakening that you have prayed for.” And so the Lord says, “Do not fear the bad deal, for I am in it, and I am disconnecting you to reconnect you.”And the Lord says that there will be a move of God on the back of the humbleness that is going to come to the UK…’

Then in Belfast at the end of this February, she brings a significant word on Brexit, the Backstop and Ireland issues and expands upon that earlier word (see transcript):

‘And the Lord says, “I am making some situations [to] bring nations to their knees right now, and even a humbleness to come within the British Isles”, says the Lord, “that I may break the spirit of Leviathan off you and your pride.” For the Lord says, “I cannot come near the British Isles while there is pride, because I am held by my word that says I must resist those who are proud.” But the Lord says, “As there is humbleness and as confusion even opens a door to a hands-up that says, ‘I don’t have an answer’ – and as that brings a sense of “Oh God! We need to look to You outside of ourselves” – the Lord says, “Then Leviathan breaks”, and then that revival rushes towards us…’

SO, note Saturday’s front-page headlines that Jennifer brought to my attention: 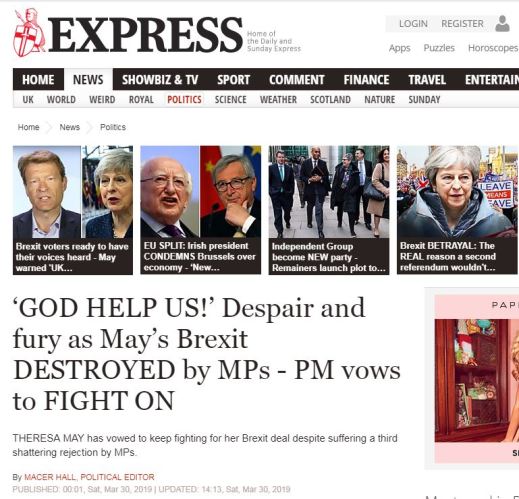 Also, in As the Brexit betrayal reaches its climax, the elite’s disdain for us Leavers is now disgracefully clear, Janet Daley in Sunday Telegraph concludes,

‘So now we have a Parliament which is defending its right to defy the people – whom it openly despises – and a government which supposedly defends the people’s judgement in the name of democracy but cannot even defend its own position in public debate.

‘Neither of the two main parties is fit for power so a general election would be an exercise in futility. And what is worst, the people have learnt something they will not forget about how much they are despised by those who actually run the country.

‘God help us. The great national virtues of reason and decency are about to be tested to their limits.’

A few recent headlines on the humiliation of Britain and our Prime Minister:

The content of the last item (thank you Carolyn) displays the arrogant pride and disdain Janet refers to that has poisoned the Remain camp, and which we believe the Lord will also be dealing with in due course.

Is it possible Theresa May’s saving grace is that the Lord sees her as our ‘scapegoat’?  This may accord with the debatable prophetic word of June 2016 that Charles Shamp brought about her mission.