Thank you Tim Shey, over in north-west USA, for the latest fascinating article by Italian investigative journalist Cesare Sacchetti.: 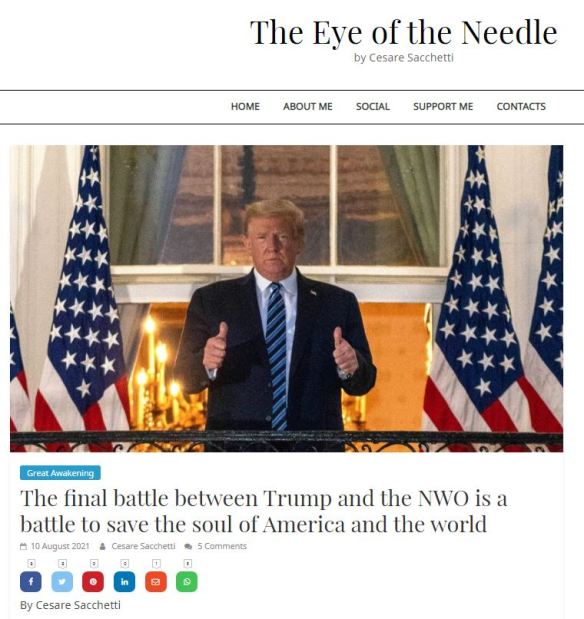 If you read Jack Dennis’ excellent overview of many well-sourced, in-depth articles on the ‘devolution’ grounds for the high likelihood of Donald Trump’s remaining in office as POTUS, then Cesare’s update on his ongoing operations to severely down-grade, if not destroy, the Deep-State control of America and it’s linkage to the New World Order complements Jack’s work with a good briefing upon DJT’s covert activities.

Cesare notes three battles in which Trump is engaged, in brief:

# 1. ‘The other task of Joe Biden was to speed up the Covid authoritarian world. The mission of the Democratic candidate was, as John Kerry said, to pave the way to a two-class society…This is not happening. Not only have many US states lifted all Covid restrictions but they also have banned the enforcement of the so-called green pass.

‘The United States is distancing itself from the Great Reset agenda, unlike the European Union that is marching towards the New World Order.

‘This reveals another relevant fact. The Euro-Atlantic block, which was the main pillar of the post-WW2 liberal order, has not been recomposed. America and Western Europe are more distant than ever.

‘Therefore, this could be defined as the first part of Trump’s plan to stop the deep state and save America.’

# 2. ‘The second part of this plan concerns the electoral audits. We saw that the Maricopa Audit is already showing proof of massive voter fraud. Arizona Senator, Wendy Rogers, has recently launched a petition to ask the recall of the state electors sent to Washington. The same idea was embraced by Georgia Senator Brandon Beach who suggested that his State could recall the electors once the audits prove the fraud.

‘The magic number is 3. Once there are at least three states that summon their electors back, the electoral fraud against Trump is completely collapsed.

‘It is at that point that the way for Trump’s return is paved. It still has to be ascertained if Trump could be reinstated directly once the audits prove the fraud or if he needs to be elected through a new election.

‘In any case, it would be a win-win situation. Trump would be President in any case. The deep state is already showing clear signs of panic…’

# 3. ‘The final and third part of Trump’s plan for becoming President again is to bring down the bigwigs of the deep state who conspired to oust him from the White House.

‘In this regard, Andrew Cuomo’s case seems to have all the potential to affect the New York Democratic mob, which has been persecuting Trump with a witch hunt made by bogus probes…’

Cesare opens this extensive article as follows (emphases mine):

‘When Mark Meadows said that Trump is meeting with his “cabinet members” (it) was not by chance. Those words were pronounced on purpose to let us understand that America is divided in this historical moment between two Presidents. As Kim Clement predicted several years ago (read here), the United States is now living a diarchy, something unprecedented in its history. Donald Trump didn’t surrender in January. He just gave the illusion to the deep state to accept the fraud but it was in that moment that he delivered the power to the military.

‘Now we’re approaching the final phase of the battle between the New World Order and Trump and the patriots. Day after day, the electoral coup is being exposed. The mainstream media is terrified by Mike Lindell’s event and Dominion is suing Newsmax out of fear. The proofs of the fraud are too big to be hidden. This is the final part of the plan. In this phase, members of the cabal such as Cuomo, Soros’ henchman and Bill Gates are being exposed.

‘Trump’s return is at hand.

‘It’s a battle over the soul of America and the world. It’s a battle between the New World Order and the patriots. It’s a battle, as (Catholic) Archbishop Viganò said, between God and Satan. Only by remembering that we are in middle of a spiritual battle, we can win. We’re not fighting only “against fresh and blood, but against principalities, against powers, against the rulers of the darkness of this world, against spiritual wickedness in high places.”….’