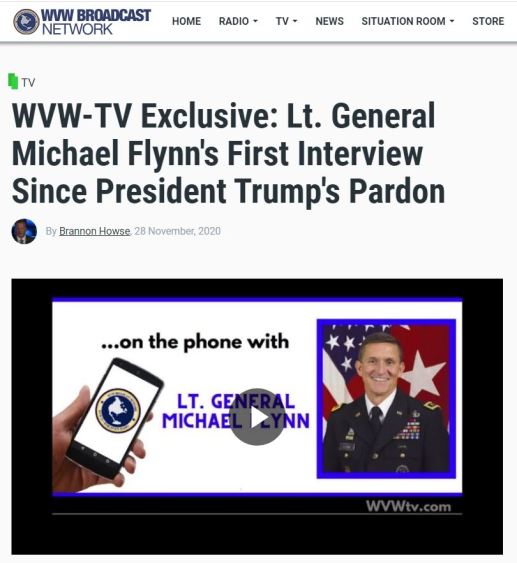 1 > From Canada to Veronika West, Northern Ireland, and forwarded to me:

“Just been sent this an hour ago by a man who is closely connected to General Micheal Flynn. Incredible stuff. Please listen and share if possible.: Could you pleased forward this interview with Gen Flynn that was his first public interview since his pardon, to Veronika as I do not know if she reads any blog responses?  In light of her latest word it will give her some confirmation.  Other participants were Lt Gen Thomas McInerney (Ret’d) and Mary Fanning of “Hammer and Scorecard”.  They speak of high treason within the US admin and the President should not concede based on preserving the integrity of the US Constitution until the results of all the voter fraud has had its day in court.  When you listen yourselves you may want to post it from your Admin position to encourage other readers.  I have to say the allegations were jaw dropping for which as we know the MSM will not discuss. Thank you and blessings to you both!”

“What’s happened in this country should never happen. We are going through a crucible of history. If we don’t correct what it is that’s happening right now in the next couple of weeks, then I hate to think of what will happen in our country going forward into the later part of December and certainly into the next month.
I do not believe for a second the country will accept B*den as the next President based on what we know to be the greatest fraud our Country has experienced in our history.

It’s our life, this our country. This is the time in our history where if we don’t get this right, this country is done. It will be over as we know it.”

“At the same as the Media and corrupt people in the US began their attempt to destroy the Trump Presidency, in 2017, they also attempted to destroy a fine Patriot, Gen
Michael Flynn, who knew all the inside track concerning their deeply nefarious plans
“But now that Gen Flynn has been found to be innocent, and received his Presidential pardon last week, he received back his high level security clearance, and he is working hard to coordinate all the military information, which will deeply expose the rigged voting.
“Last week, there was a shoot-out at a CIA facility in Frankfurt, where special US troops took the facility, and captured the servers, where the votes were being changed in favour of Biden. Several soldiers died to recover this treasure for the nation!”

‘For those who haven’t followed the case, Flynn was appointed as National Security Advisor to the Trump Administration and before he could even get started he was wrongfully accused of conspiring with Russia, based on an innocent phone call. This spearheaded into the deep state coup involving the never-ending Russia Investigation. It was Attorney Sidney Powell who discovered all the evidence that exposed the entire set up and proved he was ill-represented and wrongfully accused, getting his case dismissed, then it is stalled. Read full report here: The Michael T-Flynn Case Deep state desperately wanted to keep the General under a gag order and totally out of the picture…

I read elsewhere (can’t recall where) that he has ALL the lowdown on the traitors!

Click/tap image to read in full

“Not only do you have crooked politicians running crooked elections, but you have crooked . . . Internet companies deliberately censoring and biasing,” Gingrich told Sunday’s “The Cats Roundtable” on WABC 770 AM-N.Y.

Unless this presidential election’s corruption is exposed, Republicans will face too many obstacles to winning a fair election in the future, Gingrich told host John Catsimatidis.