It’s important not to loose sight of the fuller insights afforded by two related words from the Lord received during Trooping the Colour; one in 2016 only days before the EU-Referendum, the other this year just before Parliament voted on the EU (Withdrawal) Bill. 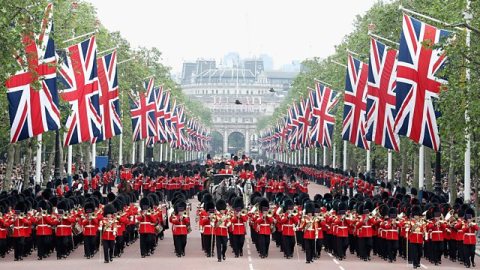 Having appeared ‘out-of-the-blue’ in our own house, the first word (“This is My country”) enabled me to recognise the authenticity of the extensive one Veronika West received . Both words bring news of Father’s heart for Great Britain, thereby confirming we’re in His awesome plan.

However, there’s one aspect of that second word we’ve yet to consider, AND it links the European Union, our government and the church to Bible history and prophecy – even bringing a fresh insight to eschatological theory.

Also, I submit that it accounts for the deep, persistently anti-democratic stance of EU-Remainers.

This year’s word came on 9th June and Veronika posted video-cum-notes entitled, A Divine Convergence, a Trooping of the Colours, the (Fox) Spirit of Herod over the Land, of which I quote extracts below and underline points for consideration:

She was told, “Daughter Look and See for the Spirit of Herod seeks to destroy and annihilate the Vision and Destiny of this Nation, WATCH AND PRAY! for this cunning, crafty and treacherous Spirit is now operating over the Government and the Church in this Nation”! …

The Holy Spirit quickened her to read Luke 13:31-32 where Jesus referred to Herod as ‘”that fox” and she explains, “Now as I read that verse, I inquired again from the Holy Spirit what He was showing me and He revealed to me that the ‘Fox’ was prophetically symbolic of the Spirit of Herod that is now operating over the Nation. The Spirit of Herod comes with the purpose and goal of total destruction and annihilation, this cunning and dangerous spirit comes at a time when a people, nation or individual is about to reach full maturity, growth, purpose and Destiny. The Spirit of Herod hates anything good or godly, this treacherous spirit seeks only to kill and destroy destinies that are on the verge of blooming.

‘As I continued praying, I began to see a powerful prophetic parallel unfolding before (me) concerning the Nation and BREXIT. I clearly began to see how this same Spirit of Herod which came against the Destiny of Jesus, John the Baptist, Elijah (operating through Jezebel), Moses and Joseph is now operating over our Government and over the Church in the Nation. This Spirit of Herod is Warring against the people of God in this Nation, and this Treacherous Spirit is contending for the Birthright and Destiny of Great Britain. (This Spirit of Herod is a GREAT THREAT TO THE NATION AT THIS TIME)!”

Drawing her to a close, Holy Spirit repeated but in more detail:

“Daughter just as the fox was seen on parade square in the light of day, out in the open for everyone to see, Watch! as My Spirit of Truth and Righteousness moves to uncover, expose and bring to light the works of wickedness and witchcraft in the land, and Watch! For those who have dishonoured Me and who have turned away and rebelled against My plans and purposes in the Nation, I will cause them to be stripped naked and paraded out in the open before all men, FOR NO LONGER WILL MY JUSTICE AND VINDICATION TARRY IN THIS NATION”!

So, this word reveals that this ‘spirit of Herod’ exhibits a dual-aspect of “operating over the Government and the Church”. In my opinion, it may possibly be identified with one of the satanic ‘trinity’ known in deliverance ministry as the Spirit of Jezebel.

We observed the political aspect of this prophecy start to manifest within days. It was publicly exposed by the Daily Mail (see Today’s Press Scoop Exposes Anti-Brexit Schemers) followed later by The Telegraph’s summary, ‘An Often Baffling Episode in The Brexit Story’. Meanwhile, my scripture trail on the parliamentary plotting brought a surprising insight, which soon got confirmed. The skullduggery continued across the political spectrum and a month later a video summary unwittingly captured the above prophecy’s specific aspect: Mogg ‘Outfoxed’ Remainers To Save Brexit.

Those blogs considered evidence of a ‘spirit of Herod’ operating through people in, or directly connected with, Government. In part 2 we’ll consider its modus operandi within the Church.

First, however, let’s unpack the “powerful prophetical parallel” Veronika saw between that spirit’s working against the destiny of Old Testament prophets, Jesus’ birth and life and today’s intense, prolonged battles over Britain’s destiny and our leaving the EU.

As in biblical times, this spirit of Herod’s mission would be to constrict any nation that has a holy history in God’s purposes into becoming a vassal state of the ungodly (even satanically directed) modern Roman Empire, and thus stop it moving into its destiny!

Herod ‘the Great’ was ancient Rome’s puppet ruler of its province of Judea and the Jewish people, plus Galilee, Samaria, Idumea, Peraea and territories north-eastward. As recorded in Luke’s historically detailed Gospel, this Herod treacherously told the eastern magi who were searching for new-born Jesus that he wanted to visit and worship the child born to be king of the Jews. But instead, he directed the ruthless massacre of boys under the age of two years! (His sons Herod Antipas inherited Galilee and Archelaus, Judea, but after the latter’s banishment through incompetence in 6 AD it came under the direct control of a procurator responsible to Rome (eg. Pilate).

Therefore, we notice the spirit of Herod’s mission in our day is once again on behalf of a man-made empire founded upon and growing out of the Treaty of Rome (1957) that’s now a large, united federation of European nations, thereby re-establishing a ‘Revived Roman Empire’; as may have been foretold in the Bible’s closing book at Revelation 13:3 (see Footnotes).

That insight enables us to understand the intensely vociferous anti-democracy aim of EU-Remainers, and the dishonesty, betrayal and treachery working within government but now exposed by Prime Minister May’s Chequers Agreement, plus its political fall-out in which many claim this would leave Britain as a vassal state of the EU!!

Moreover whilst I mull it over, Herod started building the magnificent Second Temple in Jerusalem in 19 BC but it wasn’t completed until 64 AD – six years before the Romans destroyed it. That wasn’t so much because the Jews rebelled against Rome, but more from Jesus’ prophetically weeping over the city, because they “did not know the time of your visitation!” (Luke 19:41-44).

Therefore, in considering prophetic parallels, is it fanciful to think that, as the European Economic Community and its subsequent governmental beast, the European Union and its parliament’s modern Tower of Babel, are ruled over by the spirit of Herod then it, too, could follow the destiny of his earlier achievement? That the EU too will fail and fall; be dismantled and destroyed with little left to mark its earlier existence??

I close with realising this is the second ‘scriptural trail’ that’s led to ‘the fall of Babylon’ reference. (The first followed a scriptural remark by Jacob Rees-Mogg MP indirectly related to ‘the fox’, as told here and confirmed later.)

Continue to Part 2 – Exposure in Church >>