Spotted this EXCLUSIVE scoop headline on this morning’s (Thursday) newsstand. It wasn’t possible to ignore and walk away, knowing recent prophetic revelations into this week’s skullduggery in Parliament and particularly within Government. 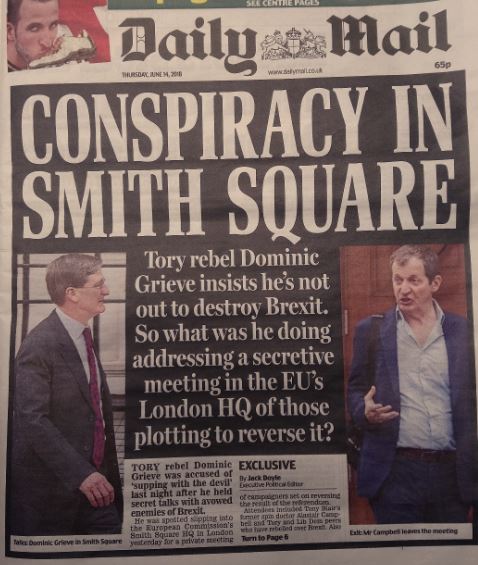 “Daughter just as the fox was seen on parade square in the light of day, out in the open for everyone to see, Watch! As My Spirit of Truth and Righteousness moves to uncover, expose and bring to light the works of wickedness and witchcraft in the land, and Watch! For those who have dishonoured Me and who have turned away and rebelled against My plans and purposes in the Nation, I will cause them to be stripped naked and paraded out in the open before all men, FOR NO LONGER WILL MY JUSTICE AND VINDICATION TARRY IN THIS NATION”!

then I note the Mail’s executive political editor Jack Doyle’s coverage of EU ‘Remainer’  Dominic Grieve, and his quoting the influential leading Brexiteer Jacob Rees-Mogg’s judiciously insightful remarks on that leader of the Tory rebels:

“He is someone I trust and when he says he is not trying to frustrate Brexit I believe him, but the people he is associating with are clear they do want to stop Brexit.

“If you sup with the devil you should use a long spoon and he is using an egg spoon.” (Emphasis RB)

‘Despite insisting they are not trying to reverse Brexit,’ writes Jack, ‘the MPs are threatening to back a House of Lords amendment that would make it impossible to leave the EU without a ‘deal’. It would also put Parliament in charge of the final stage of the negotiations. Minutes after Mr Grieve left yesterday’s meeting the participants started planning on a campaign for a second referendum to stop Brexit.

‘Mr Rees-Mogg said it was “completely improper” for the Commission to allow its buildings “to be used in a domestic political controversy. We fund the EU and it should not use our money to interfere in our domestic affairs,” he said.

‘Sir Bill Cash, chairman of the Commons European scrutiny committee, said: “It’s clear that Mr Grieve is consorting with those people who are all intent on reversing Brexit. It makes his claim that he is trying to be helpful to the Government transparent nonsense.”

‘Former Tory leader Iain Duncan Smith said: “I’m surprised if he is meeting with a whole load of people whose sole purpose is to stop Brexit when he has said it is not his intention to do so.”

The Mail’s scoop lies in spotting Grieve ‘slipping into the European Commission’s Smith Square HQ in London yesterday for a private meeting of campaigners set on reversing the result of the referendum.

‘Attendees included Tony Blair’s former spin doctor Alastair Campbell and Tory and Lib Dem peers who have rebelled over Brexit. Also present were leaders of People’s Vote, which campaigns for a second referendum, Open Britain, the successor organisation to the official Remain campaign, and Best for Britain, the anti-Brexit group backed by financier George Soros.’

Now where have we heard that last name before?  As the subject of Fulfilled Prophecy #29, and all this information validates the word Veronkia West brought about the spirit of Herod at work against Great Britain.

PS. A few weeks ago it was reported Soros has injected £6M into anti-Brexit groups – see Richard’s Watch Facebook.