Being a long weekend I popped onto my pc for 15 minutes before Saturday’s lunch to print off Friday night’s Eye View From the White House on Koenig’s World Watch Daily and spotted a couple of inter-connected items I could quickly re-blog or copy, including.  John Barber’s overview of The Mueller and Durham Reports, which proves pertinent to the latest news. The next morning he messaged me about having updated it as a consequence of a reader’s comment.

This led to a brief discussion exemplifying the importance of true impartiality when we dig into and try assessing news, all of which discussion reads:

‘I am grateful to my friend Richard Barker for re-posting this article on his website. He did so by way of it being a gentle introduction to some of the startling revelations that appear to be coming out of the Durham investigation, he posts on, e.g. “Former Italian PM Renzi and the Italian Deep State worried about Durham’s Investigation into the Russiagate sham – GTP & Cesare Sacchetti“. As I look at some of the alternative media, e.g. Bitchute, it is becoming a regular experience to come across reporting that relates to what this investigation is unraveling, including attempts to cover up criminal activity and silence whistle-blowers, e.g. “BREAKING! NEW Durham Developments! HRC, Podesta, Comey & McCabe No Immunity! No Deals! No Mercy!

‘But I will remind readers of two things. Firstly, we need to test and weigh everything (with reference to one of the reader’s comments below). Secondly, we need to recognise that all sorts of crazy stuff are being made manifest in these days that often are to do with dots joining, much of which we never would have expected. It is good to know that there are honest news reporters out there, along with those who are committed to finding out the facts.’

That segment, coupled with Fox’s massive coverage, inadvertently showed what was really going on. Fox’s networks mentioned Durham at least 30 times over the weekend, 80-plus times on Monday and 55 times on Tuesday, according to TVEyes data. …

Through all the hype by Fox and social media, it became canon on the right: This was a major story, a scandal dwarfing Watergate, and the only possible reason other outlets hadn’t covered it is that they were part of a cover-up.

In reality, in-depth reporting with context and nuance takes time; slapdash stories and opinion columns barely any time at all. But the absence of reporting created an information vacuum that Trump allies filled with conspiracies and wild accusations. And once reporters did follow up and debunk those accusations, that stirred even wilder claims about the media colluding with Democrats.

Philip Bump of The Washington Post said, of the Republican complaints about a dearth of Durham coverage, “It’s a sign of the strength of the pro-Trump/Fox News bubble that this is seen not as a reflection on the merits of the story but of a grand conspiracy.”

This happens because, as many former Fox staffers have admitted, the network (and others like it) needs enraging content to keep people watching.”

I just think it’s important that those who read your post know that there is more than one opinion on this.’

Therefore John replies, ‘Thank you Peter for your comment. Finding out the truth is a challenging business and one we should take up rather than only keeping to our understanding of what is true. But you did spur me to add an update based on further reports coming my way. I am disappointed but not surprised that the sort of reports that appear as hits doing Google searches downplay the gravity of what I see as the real issues.’

Also, CB Denver makes a valuable contribution and reminds us,

‘Of course there are different opinions out there. The whole purpose of press freedom is that you get to read a variety of opinions but it is up to the reader to discern who to believe.

On the topic of Durham, it is important to remember that Durham is conducting an investigation, not writing a report. The result of Dunham’s activities are grand jury proceedings and legal indictments. To find out what is really happening, the best action is to read the court filings. For those who are not lawyers it is good to follow lawyers who can interpret the legal manuverings (sic). Some examples I have found:

I first learned about ‘worse that Watergate’ from Britain’s independent journalist Melanie Philips in Jan 2018, which aligned with an Australian prophet’s warning – as well as what I’d heard from the Lord two years earlier on exposing political rot and corruption. Moreover, in monitoring from the White House since his suspicious Cairo speech of mid-2008 I was alerted to Obama’s dubious activities.  As a starter see Reprise – 2018 Warning of Worse than Watergate Scandal Surfacing – 2022 Far Worse Now Exposed!

However, more than questionable media I find far better resources on alternatives, and which provide solid data on top-level British involvement and leadership in destabilising USA and its elected leader!

Therefore, what Trump has claimed about deep-state treachery and endeavoured to torpedo, is indeed true.’ 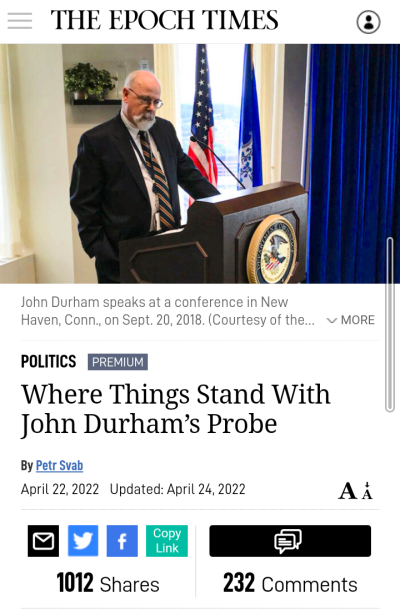 2 thoughts on “Monday Newsmix: 1- updates on Mueller/Durham per John Barber & The Epoch Times”