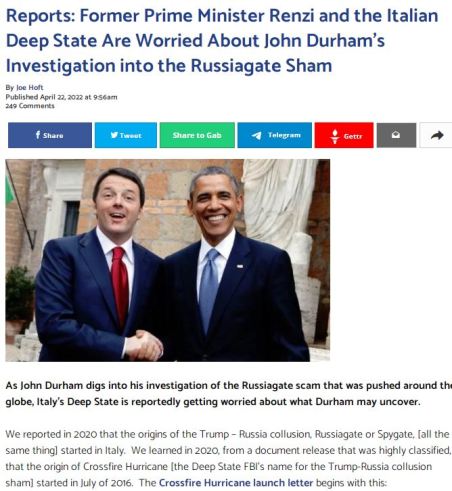 As John Durham digs into his investigation of the Russiagate scam that was pushed around the globe, Italy’s Deep State is reportedly getting worried about what Durham may uncover. We reported in 2020 that the origins of the Trump – Russia collusion, Russiagate or Spygate, [all the same thing] started in Italy.  We learned in…

For greater depth and with fewer adverts go to…

“If Matteo Renzi considers Spygate a “hoax”, why then does he claim his innocence over it when nobody has held him accountable for it in this particular moment?

Moreover, if Renzi has nothing to hide over this case, then why was he so worried about a collaboration with the Trump administration to clarify the role of the Italian government in it?

After all, if nothing happened in 2016, Renzi should not be afraid of anything at all, now should he? Transparency is the most effective weapon of those who did not commit any wrongdoing, but the former Italian PM seems to be extremely nervous about this situation.

Everybody in the Italian deep state seems to be aware that the final showdown has come. Spygate is a bomb placed in the heart of both the Italian and the American deep state.

The man who has the remote detonator is Donald Trump and it looks like he has just pushed the power button.“