This morning’s headlines on my browser-tab (also covered in The National Pulse):

‘My interpretation of this dream encounter is this: Donald J. Trump is the man on that platform who is standing for LIFE. The opposition against him tried to take him out in his first election and couldn’t succeed. In this second election, heaven is now COMMISSIONING THE BODY OF CHRIST to take her place in order to RENDER A JUST VERDICT against enemy forces. He has prepared us for this time and given us the grace to stand secure. Though the storms abound and the enemy tries to take us all under, we have the necessary authority to establish righteous rule in the heavenly realms – IF we use it.

“The outcome of this election will be decided IN THE COURTS – first in the heavens, and then in the natural. Several prophetic voices, including President Trump himself, have said the election will ultimately be decided in the courts. If we are to see heaven’s justice prevail, we must take our positions as the governing body of Christ to agree with heaven’s decisions. This is not necessarily a new word, but one that needs repeating to understand how critical our role is in this decision.”

3. “In a dream I had…I was taken in the spirit and I saw an ongoing Court Session concerning the Office of The Justice of The USA, the office responsible for judging leaders. As that office was decided upon in the dream, they began to look into a case concerning the presidency of The USA.  In the dream Donald Trump was identified as the Patron of United Nations.

“There was one who brought an accusation concerning Donald Trump, saying he should be removed because of his handling of Covid19, however, there was a voice who spoke significantly in his favor, and there was a great applause.

“The dream ended without The Court session ending, and I understood that there were battles going on in the spheres of Justice concerning Donald Trump….” 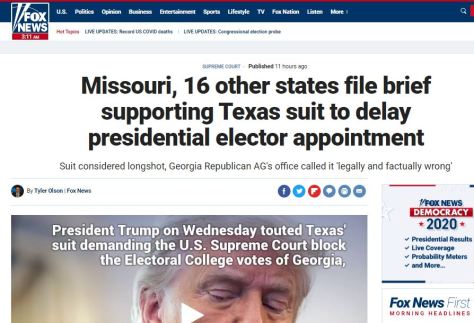 ‘Missouri led a group of 17 (sic) states that Wednesday afternoon filed a brief with the Supreme Court supporting the Texas lawsuit aimed at delaying the appointment of presidential electors from Georgia, Pennsylvania, Michigan and Wisconsin.

‘The brief mirrors the argument of the Texas suit in saying that the states acted unconstitutionally when either their judiciaries or executive branches changed their elections laws. The Texas suit, and the states that support it, say that only state legislatures may set laws regarding how states appoint their presidential electors…

“The integrity of our elections is of critical importance to maintaining our republic, both today and in future elections,” Missouri Attorney General Eric Schmitt said in a statement.

“The stakes of protecting our Constitution, defending our liberty and ensuring that all votes are counted fairly couldn’t be higher. With this brief, we are joining the fight.”‘…The states that joined the Wednesday brief are Missouri, Alabama, Arkansas, Florida, Indiana, Kansas, Louisiana, Mississippi, Montana, Nebraska, North Dakota, Oklahoma, South Carolina, South Dakota, Tennessee, Utah, and West Virginia.