Awestruck!  ‘Pieces’ of an ‘invisible jigsaw’ showered around me last Thursday. That’s the day normally spent blogging before weekends offline – but not so last week. Had it been as usual I’d have downloaded what’s in mind as a bridge between notes on two sessions by Neville Johnson. But the Lord more than made up for that in what He was to provide.

Last Thursday was a day’s retreat with the contemplative focus being ‘Sit, Walk, Stand’ at the nearby Acorn Christian Healing Foundation. ‘Quiet Days’ are ‘an opportunity to lay burdens aside and to allow God to minister to your heart, mind and body through His Holy Spirit’.

But I went with an agenda! – to catch up on several scriptures quoted in my blogs that week. Yet it seemed wiser not to overlook and speed by them, thereby missing what the Lord may have for me. My reading covers many fronts and blogging takes a great deal of time, so those verses had been plucked and stuck down without proper assimilation in my mind and spirit.  I wanted to digest them decently in peace and quiet.

To say I was stunned by three events that day is no understatement – and what I’d fully intended blogging got amazingly augmented by the day’s events!

Before entering the chapel a few of us were looking at photos of paintings done during the recent creativity day. As the others chatted I had a sense of the Lord building upon  that centre’s purpose for its new season. Upon entering the modern chapel, however, this would be confirmed in a surprising way.. 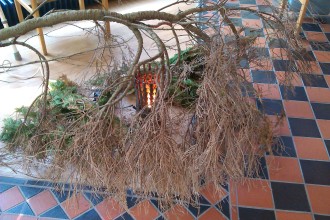 My eyes almost popped out upon being seated when I saw the limb of a tree placed in the centre of the floor. In its midst was a flickering flame, albeit imitation, from a brazier placed within the branches.

The reason chaplain Elizabeth Knifton had dragged this old branch into the chapel (and swept up its consequential trail of bits) was because of what had happened during that Tuesday’s powerful service for healing. Then, she’d had a distinct impression of the Lord saying the ground they’re standing on is holy and, therefore, to remove shoes – as in Moses’ encounter with the Lord at the burning bush.

For my part, however, what I’d previously noticed outside and thus mused upon during a service several months ago had actually come about. Also, Elizabeth’s explanation of what happened and why she’d made this presentation reflected my earlier thoughts!

During that earlier service I’d seen outside a pile of logs trimmed from the surrounding woods in the grounds. It reminded me of Gary Beaton’s photo of a pile of smoking logs but which had apparently shown flame-like angels. I was prompted to pray that such a spiritual fire would come inside the chapel and become a beacon of light in the region.

Next, Elizabeth introduced her opening devotional talk based on Paul’s superlative letter to the church at Ephesus. In teaching about our posture of sitting with Jesus Christ in heavenly places she soon went into the heart of my intended introduction to Neville’s message on the urgent need for us to be ‘heavenly minded’!!

Beginning with, ‘For we are God’s handiwork created in Christ Jesus to do good works which God prepared for us in advance for today’ (Eph 2:10) Elizabeth went to preceding verses, ‘God raised us up with Him and seated us with Him in heavenly places in Christ Jesus so that in coming ages He might show the immeasurable riches of His grace and kindness towards us in Christ Jesus’ (Eph 2:6-7).

I took particular notice that she connected verses from a different letter with this theme but which are personally relevant because they’re directly related to my testimony:

‘For He has rescued us from the dominion of darkness and brought us into the kingdom of the Son He loves’ (Col 1:13-14) – see Rescued from Satan by the Lord of Hosts.

Furthermore, the second pre-lunch message on walking in the Spirit not only mirrored the scriptures in my recent blogs but also referred at length to Enoch’s having pleased God by walking with him! (I’d underlined related verses in those posts.)

Flying up in the stratosphere after the morning’s events, a period of personal ministry brought the third major blessing of the day: although I was away from blogging it tied into what I would have written about – a heavenly perspective and becoming heavenly-minded. Wonderful how our Father knows our most intimate desires and thoughts, and fulfils them when aligned with His will.

After sharing my excitement with the Spirit-led chaplain and a ministry leader, these two handmaidens of the Lord prayed some scriptures over and into me. First, and perhaps most important are the verses describing the glorious visionary encounter Daniel had experienced, as in Daniel 10:10-21. (Very interesting this refers to the prince of Persia (Iran) and Daniel’s people, the Jews – demonic issues still continuing today!! AND I’d recently blogged with great difficulty about Jews searching for their true Messiah.)

Also with a relevant bearing are the vision of Isaiah (chapter 6) before the throne of God and his mission; Apostle John’s anointing as a visionary writer (Rev 1:10-19); a double reference to Joshua’s mission plus another from Exodus.

Although I’m used to frequent ‘God-incidents’ in my life and blogging, it’s impossible to become blasé. Such events are always surprising – and praiseworthy! The latest repeated and thereby confirmed the relevancy of scriptures and concepts blogged only days beforehand – AND of what would have been written that very day!!

Purely for information, they are:

Apostle Paul’s remarkable ministry in Ephesus is covered in-depth by Keith Lannon in  Management of the Miraculous: Ephesus is Taken.  His introductory premise closes as follows (with emphases mine):

‘The depth and totality of the work accomplished by Paul in Ephesus, as well as rippling throughout the whole of Asia, was such that we know and can see that in the last book of the Bible, it was acknowledged in heaven as a work that was especially significant amongst the entire world-wide church at that time. I see it as if the entire life of Paul was a learning curve in lots of directions that led up to a period of ministry which by its shock and significance, changed the world at that time.  Paul had seen the sick healed before, but not on the scale of Ephesus. He had cast out demons before, but seen nothing like the witches and Wizards that were delivered in the former “City of Diana of the Ephesians”. He had pointed out people from the crowd before and ministered to them by the leading of the Spirit, but not as intense as in Acts 19. It was such an incredibly solid and comprehensive time of church building, that when the Lord Jesus gave John the apocalyptic prophecy of the book of Revelation, he only addressed the main seven church centres that were created and established by Paul’s work in this particular mission, at this time. No other church was mentioned or acknowledged by the risen Christ as He stood amongst the candlesticks. In fact, no other candlesticks were referred to apart from those in Asia. We are talking of serious culture and population impact with the gospel that is second to none in history, with a depth of foundation laying, and an awesome height of people/church building, that I am convinced has been unparalleled since. We are examining a period of missionary work that had heaven’s stamp of approval like none other….’