The Father has delivered and drawn us to Himself out of the control and dominion of darkness and has transferred us into the kingdom of the Son of His love, in Whom we have our redemption through His blood, the forgiveness of sins. [St Paul’s letter to the Colossians 1:13-14, Amplified Bible.]

Awesome as it was, the dream-vision recounted in The last day of my life didn’t make me want to rush off to church. There was much to mull over, especially its meaning to my way of life. Its ramifications needed deep consideration and not only did I need to assess the dream’s impact, but I also wanted to find well-informed believers who took Jesus seriously. First, however, I needed to check out New Agers’ claims of the Bible having been tampered with by early Church councils, as well as its history and content.

In my wariness of religious people I surmised none would be able to listen to me, or even comprehend my story. They’d be ignorant about such things. AND none of them would have been through my kind of bad, meditative ‘trips’? Or so I thought!  But help was at hand… 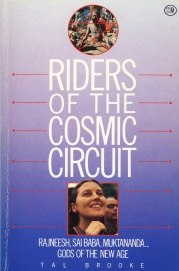 Whenever I went into a local Christian bookshop one book would almost jump off the self at me! The Lord was directing me to biographies of Christians who, like me, had been tied into New Age and occult activities. They’d been rescued from terrifying situations by calling upon Jesus’ name. Their true stories brought home to me the truth of what had happened in that exceptional dream. I became so deeply grateful to the real living God for having saved me. I didn’t know that Satan himself masquerades as an angel of light; his followers as servants of righteousness (2Cor 11:14). I’d been deceived and beguiled but the scales were starting to fall from my eyes – an awesome awakening, and a homecoming!

Tal Brooke, son of American diplomats and pioneer in meditation with crystals, held a privileged position in the inner circle of the revered Indian guru Sai Baba, of whom he later wrote, “I had discovered an absolutely satanic thing operating behind Baba’s veneer”. Tal’s personal encounter with the devouring darkness behind the ecstatic light and consciousness called ‘nirvana’ validated my own experience. Roy Livesey had been in the same brotherhood as I had and his book, too, had been thrust upon my attention.

Upon reading Livesey’s account one lunchtime I prayed the ‘sinner’s prayer’ and on 29 March 1990 gave my life to Jesus as my personal saviour. Driving home, however, the spiritual enemy tried to get me into a couple of road accidents. And when I arrived home I found he’d even attempted to burn down our new, wooden-framed house. Thank you Lord for being there – the fire had been put out by throwing water onto flaming fat in an electric oven!!

Months after the dream, I’d learned some members of the church that had invited me to hear Billy Graham met in the school next to our house. Later, I heard that these people had given Peter prayer backing for his discussions with me – they’d targeted me!  God had definitely answered their prayers by giving me the dream-vision.

The first service I attended there was a culture shock! – before me a young man, devoid of dog-collar but bedecked with acoustic guitar, led the meeting in song. He went on to  conduct the ‘service’ from his head and heart, without any script or ritual. And he even encouraged discussion!  Some testified to angelic protection in their lives: I’d thought this subject was lost to churchgoers. And, starting the sermon, he announced that they were going to look at the shortest gospel, that of Mark, and continue over the next weeks. In saying, “It’s action packed and full of urgency” he intrigued me, and this fitted in with my intention to check out the Bible.

Therefore, I thought it might prove useful to come again. One thing he taught stuck in my mind – “In Mark, who first recognised who Jesus really is?”  Answer: an unclean spirit (see Mark 1:24). I was thus reminded of that dream’s events.

And so I came into a good place to build upon the message of that dream by learning about the Bible and, more importantly, by listening to God through His written word. The first of many times this has happened was incredibly clear proof that God does speak through the Bible, as claimed by this group of believers.

I decided to re-view the occult brotherhood’s teaching on Jesus from a massive mound of monographs. After having checked all those specifics, I asked God for guidance upon this matter and opened my new, pocket-sized Bible. I’ve never been able to repeat what happened next – it fell open at the second chapter of the Apostle Peter’s second letter, as here. The first ten verses stood out with startling clarity, the rest was hazy! Therein, Peter warns about false teachers:

…who secretly introduce destructive heresies, even denying our sovereign Lord…Many will follow their shameful way and bring the way of truth into disrepute. In their greed these teachers will exploit you with the stories they have made up. Their condemnation has been long hanging over them…2 Peter 2:1,3 [emphases especially hit ‘the bull’s eye’]

Those verses go on to explain that assessment and what happens to such teachers. This answer from God to my question was startlingly exact! I was most amazed.

Also, in those early days I reviewed my earlier uncharitable views about the clergy. Readers may understand from my story how very difficult it was for me to contemplate attending church, let alone with any regularity – not to mention being under the oversight of any sort of clergyman whatsoever.  And, as mentioned above (reiterated to show my strength of feeling): they certainly couldn’t comprehend where I’d come from.

So once again I decided to put preachers’ claims about the Word of God to the test. I asked if God could let me know His opinion about clergy…

Again! my Bible fell open to give the most apposite instruction at Hebrews 13:17:

Obey your leaders and submit to their authority. They keep watch over you as men who must give an account. Obey them so that their work will be a joy, not a burden, for that would be of no advantage to you.

That well and truly put me in my place and enabled me to make my mind up. Thank you Lord for answering and correcting me!

Only upon revisiting this testimony in later years did I realise those two passages starkly contrast both forms of leadership under which I submitted. The first was ungodly, and the latter is blessed by God and proves to be the better, nay ‘most best’, spiritual cover for protecting His children.

Not Yet Fully Free

But back to those early days. From those who’d trodden the same path as me I learned the importance of being completely cut off from my old life in the ‘New Age’. This meant getting rid of books and objects associated with it, but I was slow to so do. Although I’d turned away from that past life an unseen bond seemed to remain.

It needed to be dealt with next because I wanted what’s promised in the written Word:

So if the Son liberates you, then you are really and unquestionably free.  [John 8:36 Amplified Bible]

Bible quotations are by courtesy of BibleGateway.com – thank you for this facility.

7 thoughts on “Rescued from Satan by The Lord of Hosts”