A year ago today, 23rd March 2020, I was mulling over the news, articles, scriptures and contemporary prophecies on the pandemic originating in China. So that night I put it to the Lord and upon waking the next morning, asked Him about it and got an answer right away – but didn’t divulge it for weeks until a top-level source validated what I’d heard. Then along came more validations!

Here’s a short version of what I eventually blogged about what happened over 23rd – 24th March last year:

‘US Secretary of State Mike Pompeo is reported in an interview with ABC’s This Week as saying, “There is a significant amount of evidence that this (pandemic) came from that laboratory in Wuhan. The best experts so far seem to think it was man-made. I have no reason to disbelieve that at this point.”

‘I was intrigued that a person of such rank as the United States’ Secretary of State more or less confirmed what I heard from the Lord. Yes, indisputable evidence would validate that word…What I received was shared in a footnote to the first of this series of posts (F/P #162.1) monitoring the fulfilling of prophecies on the pandemic, Another Prophecy of 2019 Revisited re Coronavirus – The Lord Reveals its Origin and slightly expanded upon in the intro to F/P #162.5 on Charles Shamp’s vision of demonic laboratories…

‘An interesting discussion developed within this group of prophetical brethren on the origins of the global pandemic. I raised a question about the virus’ origin (Is there unequivocal proof that it is a man-made virus? I understand a virus is a combination of organic and inorganic materials and know of none that are beneficial, as  are bacteria. So how do viruses fit into God’s creation design and plan? Or could they come from satan’s post-Genesis activities?)

‘This generated an interesting flow of information in parallel with dealing with true and false prophets, questions over whether or not the situation is directly from the Lord and how it relates to scripture and End-times – even believers’ confusion over it all..

‘And so I mulled all those matters over in my mind last Monday night. This included various scriptures, prophetic ‘opinions’ as well as rumours on the issue, especially that as El Shaddai, the Lord is ‘The God of utter ruin and devastation’ according to rabbinic doctrine. I laid out all I’d heard, those particular scriptures – see next post for details – plus the whole canon and my own thoughts, just like papers spread out on a desk before the Lord for His advice!

‘Later that day I came across Yinka Oyekan’s Facebook posting of the 23rd March on a dream of his that brought me confirmation, especially on the End-times…He replied to me, “The signs of the end times being upon us are not yet fulfilled, this formed part of my weighing the dream.”

All that and more got blogged as the first in series #121 of fulfilled prophecies, and I was delighted when MORE validations followed, viz:

The last, numbered 7, is based upon details in validation 5 from Dr Li-Meng Yan, who managed to escape from Hong Kong to America. Therefore, the next is the real 7th and I spotted this only yesterday in The Gateway Pundit (repeating The Epoch Times of last week), confirming Dr Yan’s in-depth reports: 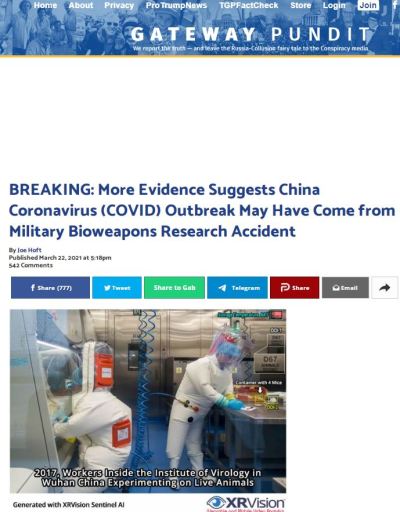 ‘A former lead investigator at the State Department says he believes the coronavirus was accidentally release as a result of research done by the Chinese military into bioweapons. David Asher, a former Department of State employee who oversaw the task force into the coronavirus’ origins, said he believes the virus not only came from the Wuhan Institute of Virology, but that it also may have been a bioweapon potentially used by the People’s Liberation Army.’