Further to my post about more Catholics putting the lies to Biden claiming he’s devout and their standing against his anti-Christian policies, here’s yet another example of my prophetical musing upon political corruption being exposed to the light of day. (This makes 250th example I’ve logged of prophecy being fulfilled.)

If you’ve read my post on the letter from retired US Capitol’s Police of Chief Steven Sund to Speaker of the House Nancy Pelosi, you will recall his statements about not having any advance intelligence to indicate their would be an attack by protesters during Donald Trump’s rally a mile or so away from the Capitol. First, a reminder of timings:

“…nothing in our collective experience or our intelligence – including intelligence provided by FBI, Secret Service, Department of Homeland Security (DHS) and D.C. Metropolitan Police (MPD) – indicated that a well-coordinated, armed assault on the Capitol might occur on January 6… Daily Intelligence Report assessed “the level of probability of acts of civil disobedience/arrests occurring…”as “Remote” to “Improbable” for all of the groups [ie. the Proud Boys, white supremacist groups, Antifa, and other extremist groups] expected to demonstrate on Wednesday, January 6, 2021.

‘Trump supporters who responded to his rally-call and awaiting his delayed appearance were “compliant” – and no issues of concern were observed or reported!!’

Furthermore, pipe bombs found at both political parties’ HQ had to be rendered safe. Also, I added photo of Washington Times headlines (7th January) ‘Facial recognition firm claims Anitifa infiltrated Trump protesters who stormed the Capitol‘, which later had to be disowned and retracted under pressure!

What I didn’t mention but cropped up in discussion on John Barber’s Facebook copy of my re-blog from The Marshall Report’s Help Denied at Capitol Seige Says Sund, is my remarking (pertinent emphases now added):

‘Dianne Marshall’s on-the-ground reports and comments thereto indicate busloads of ‘professional’ agitators were seen in vicinity of Capitol; which reminds me of 2017 riots in Charlottesville where witnesses attested to such thugs donning different shirts and hats in the buses (from Obama’s Organization For Action?). So, when they emerged as pro-right and pro-left supporters they then attacked ALL those who were marching AND the public, some of whom the police had deliberately NOT protected but funneled into the march!!!’ 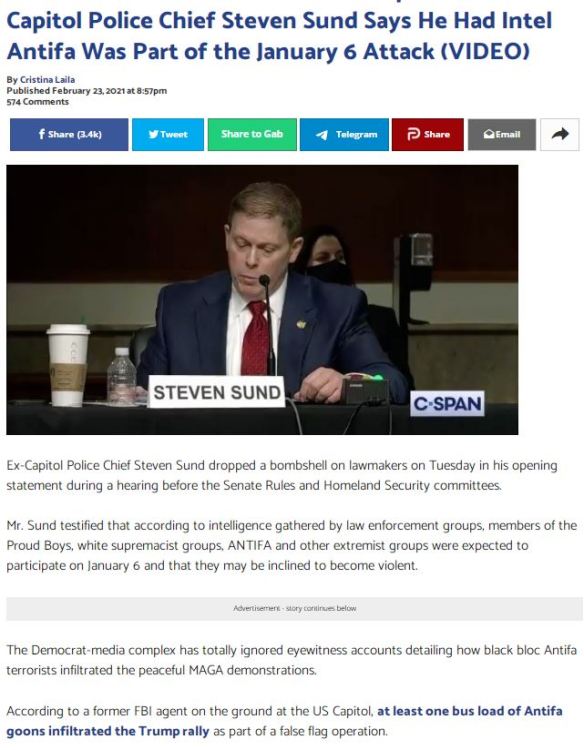 ‘Ex-Capitol Police Chief Steven Sund dropped a bombshell on lawmakers on Tuesday in his opening statement during a hearing before the Senate Rules and Homeland Security committees. Mr. Sund testified that according to intelligence gathered by law enforcement groups, members of the Proud Boys, white supremacist groups, ANTIFA and other extremist groups were expected to participate on January 6 and that they may be inclined to become violent.

‘The Democrat-media complex has totally ignored eyewitness accounts detailing how black bloc Antifa terrorists infiltrated the peaceful MAGA demonstrations. According to a former FBI agent on the ground at the US Capitol, at least one bus load of Antifa goons infiltrated the Trump rally as part of a false flag operation….’

‘Ex-Capitol Police Chief Steven Sund told lawmakers on Tuesday during a hearing before the Senate Rules and Homeland Security committees that he did not get the FBI report warning of violence on January 6. The FBI issued a report January 5, one day before the riot at the Capitol dome building that detailed calls for violence.

‘Mr. Sund said his department had received the FBI report, but it never reached his office. Sund testified that an officer with the Joint Terrorism Task Force with the FBI received the report and then gave it to an official in the Intel Division at the US Capitol Police HQ….’

‘It is essential to be very clear about what happened and what did not happen. This was not a “riot” if riot means people hurling rocks and bottles or igniting Molotov cocktails and torching all structures in their reach. The vast majority of those who entered the Capitol behaved more as tourists than anarchists. There was no wanton, massive destruction of art work, furniture or signs inside the building. Walls were not covered with graffiti or feces.

‘Most importantly, the Trump supporters did not kill a single person. I want to reiterate that point because my bookkeeper, who had listened to the media lies, believed that at least seven people died and that the Trump folks killed them all, including the Capitol policeman. All a lie.