America’s president cut short seeing in the New Year at his Florida estate to return to the White House to attend to the 2020 election issues. Also, it’s a more secure place in view of the Iranian president’s personal threats upon Donald J Trump’s life.

We note a few of yesterday’s headlines and breaking news of today from The Epoch Times, then William Koenig’s Friday round-up [NB: extracts only, underscores mine]: 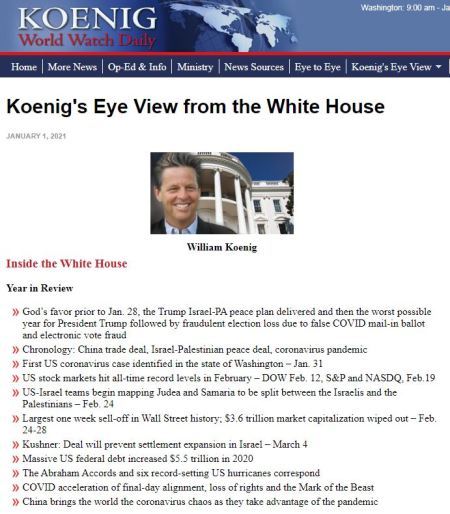 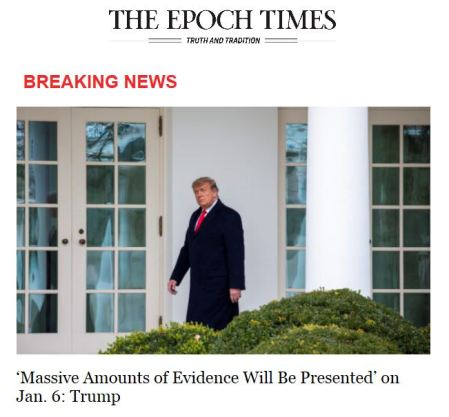 Fraud in six swing states Pennsylvania, Georgia, Wisconsin, Michigan, Arizona and Nevada, where there were illegal issues. The rule of law didn’t matter.[!!!!]

There is much concern about future election integrity. Probably the only good news is that the level of Democratic election fraud was exposed, with more details weekly. This wasn’t the first time.

Both Senate and House legislatures are controlled by Republicans in these key swing states: Arizona, Pennsylvania, Georgia, Wisconsin and Michigan.

This is a great advantage for Republicans. If [RB: IF] the 270 electoral vote threshold isn’t achieved by either:

then the decision goes to one vote per state. Trump wins. (The Pence scenario is below. He is reluctant but may have to make this decision.)

Question of the hour:

Will Vice President Mike Pence decide on January 6 not to accept the electoral votes of the swing states that did not follow U.S. constitutional guidelines and/or due to fraud in the 2020 presidential election?

Commentary: It’s for Mike Pence to Judge whether a Presidential Election Was Held at All – December 26, 2020

Note: A very concise commentary by Ted Noel. That VP Pence doesn’t need to take to the House that he alone can call the election in his electoral capacity if neither candidate reaches 270. The election could be given to Trump after the illegal swing states vote totals have been reduced with Trump at 232 and Biden at 222.

On January 6, a joint session of Congress will open with Vice President Pence presiding as president of the Senate. His power will be plenary and unappealable. You heard that right. As president of the Senate, every objection comes directly to him, and he can rule any objection “out of order” or “denied.” His task will be to fulfill his oath of office to protect and defend the Constitution of the United States and to ensure that the laws be faithfully executed. This is a high standard of performance, and V.P. Pence will have two choices. He can roll over on “certified” electors, or he can uphold the law.

Article II, Section 1 of the Constitution gives state legislatures “plenary authority” as enunciated in Bush v. Gore. This is key, since the counting of votes is discussed in Article II, the 12th Amendment, and 3 USC 15. To this we must add the history of counting and objections recounted by Alexander Macris (here and here). Put bluntly, it’s as clear as mud. Add to that the fact that the contested states of Arizona, Georgia, Michigan, New Mexico, Nevada, Pennsylvania, and Wisconsin have sent dueling slates of electors to D.C. This means that the V.P. has to decide how he will handle the situation when two sealed envelopes are handed to him from any of those states.

Macris points out that in 1800, even with constitutional deficiencies in Georgia, Thomas Jefferson blithely counted defective electoral votes from Georgia, effectively voting himself into the presidency. This demonstrates that the president of the Senate is the final authority on any motions or objections during the vote-counting. There is no appeal. That doesn’t mean there won’t be any outrage. Whatever Pence does, people will be angry. But what does the law demand?

Seven contested states clearly violated their own laws. Rather than list the facts, which have been detailed in multiple articles, we must consider the following:

An election is a process of counting votes for candidates. Only valid, lawful votes may be counted. A valid lawful vote is:

Any process that does not follow these rules is not an election. Anything that proceeds from it cannot be regarded as having any lawful import.

For the full commentary > The American Thinker

Read the Memo Provided to VP Pence Noting that He Has the Opportunity to Save the Country – December 31, 2020

When the joint session of Congress convenes on January 6th, Vice President Mike Pence will control the session as President of the Senate. His power in that chair will be “plenary,” which is “absolute and unqualified.” [Merriam-Webster]

As President of the Senate, Vice President Pence can note “competing” Electoral College “ballots” in favor of BOTH Mr. Biden and President Trump. The U.S. Constitution mandates that the U.S. Senate be presented with the Electoral College results and must pass judgment as to their validity.

Since there are several states that did NOT conduct the presidential election in accordance with U.S. Constitution mandates, they should be deemed invalid and NEITHER Biden NOR Trump would have the required 270 votes. The 2020 presidential election winner would then be decided by Congress as specified in the U.S. Constitution as has happened in the past.

Title 3 of the U.S. Code includes provisions governing the conduct of the joint session. Section 16 of Title 3 is intended to ensure that the joint session conducts and completes its business expeditiously. As discussed below, §18 prohibits debate as well as the offering and consideration of almost all questions.

It is Vice President Pence’s duty to fulfill the U.S. Constitution. Much of this would have been avoided if the court system was functioning properly.

Clearly, it is not. In refusing to hear the case Texas v. Pennsylvania, the U.S. Supreme Court abdicated its constitutional duty to resolve a real and substantial controversy between and among states that was properly brought as an original jurisdiction in what could arguably be the most important case ever submitted.

The Supreme Court used standing as its excuse even though the word “standing” does not appear anywhere in the Constitution, and the Constitution clearly states in Article III that this is its duty.

“The Supreme Court really just decided on a political whim to not hear this case when clearly you have the interests of 80 million American voters whose votes were disenfranchised based on the corruption and based on them [corrupt leadership in swing states] ignoring the rules in these states,” noted Trump attorney Jenna Ellis.

In his role as President of the Senate, Vice President Pence will accept the envelopes from each state containing their electoral votes. In seven cases, PA, GA, MI, WI, AZ, NV and NM, he will receive two envelopes representing competing slates of electors, one each, in favor of Trump or Biden. Rather than opening the envelopes of the contested states, the President of the Senate will enumerate each individual state’s violations of their own constitutions, state by state and law by law as well the general violation of Article II, Section 1 of the U.S. Constitution and place the evidence in the record. He will state that the 2020 Election was lawless, and state election officials provably disregarded the law both before and after the election. He will declare that reasonable doubt on the validity of the electors exists in these swing states, and they were the specific targets of coordinated election fraud.

“You should be scared to death if both those Republicans lose that runoff,” Morris told weary Georgia Senate runoff Republican voters.

“Goodbye checks and balances, goodbye founding fathers, goodbye Constitution,” Morris warned. “The courts, the House, the president, and the Senate will be in perfect alignment to do whatever the radical wing of the Democratic Party wants.”

The rejections of courts to hear President Donald Trump’s campaign election challenges are a denial of his right to due process, according to Trump campaign legal adviser Jenna Ellis on Newsmax TV.

“They need to recognize that President Trump absolutely gets the same opportunities to argue his case that President George W. Bush did in 2000,” Ellis told Tuesday’s “Stinchfield,” pointing to the landmark Supreme Court case Bush v. Gore.

“And to treat him differently than every other sitting president in every other election is manifestly unfair according to due process and our Constitution.”

Specific examples of voter fraud will be presented Jan. 6 if debate is held on the 2020 election results, according to Trump campaign senior adviser Jason Miller on Newsmax TV.

Electoral College ballots are scheduled to be certified during a joint session of Congress on Jan. 6. Miller said evidence presented there would be different from that in the legal battles President Donald Trump’s campaign has fought in the courts.

“Any of the [court] dismissals have been on process,” Miller told Carl Higbie on Tuesday’s “Greg Kelly Reports.”

“Article II of the Constitution makes it very clear, the state legislatures, and state legislatures alone, set up the voting systems for each state, the codes and the way they are conducted,” Miller said. “And what we have here is we have over 20,000 ballots that were cast without actually having a application on file, the mail ballots. Wisconsin’s very clear, very specific you got to have an application on file.”

Jovan Pulitzer says Georgia Called in Trucks to Get Rid of the Evidence in Fulton County He is Supposed to be Scanning! (VIDEO) – https://www.thegatewaypundit.com/2020/12/breaking-big-jovan-pulitzer-says-georgia-destroying-fulton-county-evidence-supposed-scanning-video/

Arizona Citizens Investigation Discovers Thousands of Phantom Voters in State – Up to 30% of Addresses in Investigation Were Fraudulent – https://www.thegatewaypundit.com/2020/12/update-arizona-citizens-investigation-discovers-thousands-phantom-voters-state-30-addresses-investigation-fraudulent/

FOOTNOTE: Links to all postings in this series are at US 2020 Election Updates.