Thank you to those readers and Facebook friends who drew my attention to another pertinent Sid Roth’s It’s Supernatural. Christine Bambrick remarks,

“For very interesting confirmation of both this word (where Veronika heard the Lord say “And the key of the house of David will I lay upon his shoulder, so he shall open and none shall shut …”) and Charlie Shamp’s word on October 23rd (Pennsylvania is Key, It’s Time To Pray), go to Sid Roth interview with Chris Reed (Title:I Just Saw Jesus Doing THIS About the Election.) Listen at the beginning re Pennsylvania and 11 minutes in to hear confirmation re what Veronika heard.”

First thing this morning, Chris Moyler tagged this onto my personal Facebook: 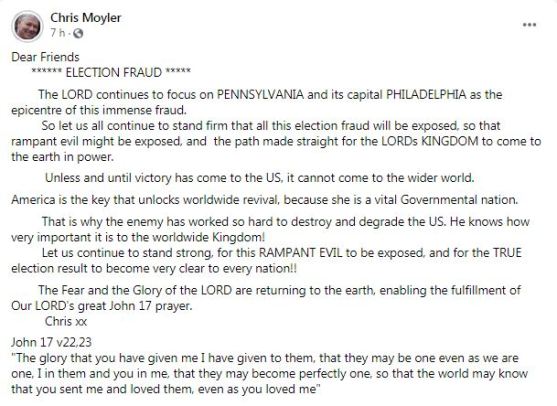 2 thoughts on “New prophetic vision of Philadelphia and US election”