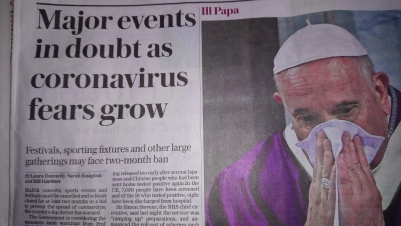 “Repent for the Kingdom of Heaven is at hand!”

Fridays start our long weekend but I’m interrupting the break to post today’s (28th Feb) headline news in the light of the word received by Leisa Ebere yesterday, and amending the title of a blog scheduled for posting tomorrow.  This afternoon’s news reports “When asked how close the UK was to cancelling big events due to the the virus, Health Minister Jo Churchill said. “We are taking the advice of the Chief Medical Officer and assessing the situation on a day-by-day basis. Any decision to cancel events or mass gatherings have to be assessed at the time, based on clinical guidance and based on risk.” [UPDATE 12 Mar: World Health Organization in Europe declares global pandemic, at phase 6 level.]

The scheduled item and its original title reads:

ARE COUNCILS, EVEN SOME CLERGY, CURSING CITIES ACROSS THE UK?

In view of the great spiritual conflict across the United Kingdom of Great Britain and Northern Ireland, as indicated by councils closing facilities to prevent Franklin Graham preaching the Good News of salvation, I humbly submit for consideration scriptures drawn to my attention after our prayer and blessing for our Isles on Wednesday morning.

Matthew 10 records Jesus’ action and instructions in sending out His twelve apostles to broadcast the Good News (emphases added of what I believe the Lord is pointing out):

“..as you go, preach, saying, ‘The kingdom of heaven is at hand.’8 Heal the sick, cleanse the lepers, raise the dead, cast out demons. Freely you have received, freely give. 9 Provide neither gold nor silver nor copper in your money belts,10 nor bag for your journey, nor two tunics, nor sandals, nor staffs; for a worker is worthy of his food.

11 “Now whatever city or town you enter, enquire who in it is worthy, and stay there till you go out. 12 And when you go into a household, greet it. 13 If the household is worthy, let your peace come upon it. But if it is not worthy, let your peace return to you. 14 And whoever will not receive you nor hear your words, when you depart from that house or city, shake off the dust from your feet. 15 Assuredly, I say to you, it will be more tolerable for the land of Sodom and Gomorrah in the day of judgment than for that city!“

Remember this was before Jesus was crucified and died for our sins and then brought back to life. Therefore, how much greater the Holy One’s stricture against those who oppose His Holy warrant to His evangelists after having given up His life for all sinners so they can receive forgiveness, salvation and right of entry to Throne Room of The Almighty!

At that early stage, the apostles began preaching and ministering in the same manner as had Jesus at the outset of His ministry in Galilee, urging

“Repent for the Kingdom of Heaven is at hand!”

According to God’s Word, therefore, when anyone such as Franklin Graham is sent to preach the Gospel message it truly is as if they’re sent personally by the Lord Jesus, just like an ambassador.

In cancelling the venues for Franklin’s tour, therefore, each council official AND cleric who rejects him also rejects Jesus – and The Almighty!  (Details in WeeFlea here and here.)  So those church leaders could be refused entry into heaven, according to Matt 7:21-23. Furthermore and according to the above verses, are officials cursing our cities and citizens by their actions??

What’s more, a prophetic word from the Lord of His acting against ‘pride’ has been received about the rapid spread of a contagion, or plague, worldwide from the land that has taken down over 4,000 crosses from and demolished churches (Barnabus Aid).

As an unintended consequence, our government is considering cancelling all stadium events and other large meetings and gatherings. That is, as evangelist Graham is not allowed to hold Gospel meetings in public venues then, for different but directly related reasons, we will probably find all public gatherings are to be curtailed.

Most sadly, as many of our fellow citizens have allowed satan and its demonic spirits to indoctrinate and direct them, theirs is the prospect of a personally perilous judgement – one worse than that coming to the original sodomites!

Lord Almighty, please would you do as you did with me by sending your Spirit of Reverential Fear of the Lord so these precious people become keenly aware of that judgement and convicted of their sin, and lead them into true repentance and thus receive Your gracious mercy and salvation.