“Blessed be the name of God forever and ever,
For wisdom and might are His.
21 And He changes the times and the seasons;
He removes kings and raises up kings;
He gives wisdom to the wise
And knowledge to those who have understanding.
22 He reveals deep and secret things;
He knows what is in the darkness,
And light dwells with Him.”

Was last week’s General Election another ‘Act of God’, akin to the Referendum result? I’m convinced it was – and it’s magnitude was as prophesied…!!!

How ‘God-incidental’ that news of Boris Johnson’s historic, landslide victory with a huge parliamentary majority, is my quadruple 12th record of a prophecy being fulfilled. (12 x 12 x 12 x 12 = 48. See recent blog.)  Later, we’ll see how this also tallies with a specific prophecy on this victory – and thank you Christine for pointing out in Part 1 what hadn’t dawned on me – the number of seats won is 365!  She asks, “Is this significant & shows God’s sense of humour?” – well it’s one seat for each day of the year!

Ever since taking over from Theresa May, Boris’ mettle has been severely tested and refined in the fire of extreme adversity. Moreover, it’s also proven suitable for testing the accuracy of what Christian prophets claimed are words from the Living Lord God.

1 > Of his heaven-sent meeting with Boris Johnson 3 months ago Frank Sui reports,

“I briefly explained how he compared to Moses, but he already knew that. I mean, Boris compared himself to Moses once and used the phrase, “Let my people go.” But of course, he didn’t know about the anointing that came from God.  I said, “This is what God has anointed you for. The situation you are facing right now is the Red Sea, which Moses had to cross to take the people of Israel to their Promised Land. In the same way, you must overcome this situation in order to take this nation to its Promised Land. But I believe if you will humble yourself and seek His face, God Himself will split your opposition in half like He split the Red Sea.” [Emphasis by RB]

2 > On 9th July 2019, Veronika West published a fuller word upon a previous one:

A WORD FOR THE UNITED KINGDOM OF GREAT BRITAIN AND NORTHERN IRELAND; “A WHIRLWIND OF MY GRACE WILL BRING FORTH GREAT CHANGE AND VICTORY OVER YOUR ENEMIES”..!

WATCH! WILLIAM WILBERFORCE AND WINSTON CHURCHILL SHALL BE A SIGN OF HIS ‘GRACE POURED OUT’ AND ‘VICTORY’ OVER OUR NATION…!

‘This afternoon as I was sitting meditating on the words God has given me in the last three years concerning the UK/BREXIT and the current political climate, I heard these words,

“MY WHIRLWIND OF GRACE SHALL BLOW FORTH UPON THIS LAND GIVING THE NATION OF GREAT BRITAIN AND NORTHERN IRELAND GREAT VICTORY OVER THEIR ENEMIES”..!

‘As I heard those words I saw Sir Winston Churchill with his famous “V” FOR VICTORY SIGN, and then I heard the sound of the Song “AMAZING GRACE” within the Whirlwind, this song was written by John Newton who worked alongside one of the greatest reformers of our time, William Wilberforce, who abolished the Slave Trade.

‘As I saw Winston Churchill and I heard the Sound of the Song of “Amazing Grace”, I knew the Lord was revealing to me how He is now moving strategically in our Nation at this critical time; HIS WHIRLWIND OF GRACE IS NOW BRINGING FORTH GREAT CHANGE AND VICTORY FOR OUR NATION.’

July 2019, Veronika had an exceptional dream about Boris Johnson and the danger this new leader of the Conservative Party would encounter as Prime Minister during the reminder of this year. The dream’s first part about the first 4 months in office has proven true and last week the remainder was fulfilled:

‘I had a powerful dream about BORIS JOHNSON where I saw him go before Her Majesty the Queen to receive his Title as “PRIME MINISTER”.

‘Now in the dream I saw Boris Johnson shaking hands with Her Majesty the Queen and they both began to chat with one another about the new position of influence that Boris would have in the days ahead in the Nation. As I watched them talk in the dream they both proceeded to sit down together, and as they went to take their seats, suddenly I noticed that the CHAIR that PM Boris Johnson took was a chair that LOOKED LIKE AN OLD ANTIQUE CHAIR, WHICH WAS NOT ONLY VERY EXPENSIVE BUT ALSO VERY, VERY FRAGILE, NOW AS I LOOKED AGAIN IN THE DREAM AT THIS OLD AND EXPENSIVE ANTIQUE CHAIR, THE FOUR (4) LEGS OF THE CHAIR WERE IMMEDIATELY HIGHLIGHTED TO ME AS SOMETHING VERY SIGNIFICANT, BOTH (the number of legs that the chair had (4) and the fact that THE LEGS OF THE CHAIR LOOKED VERY SKINNY AND NOT VERY STRONG!

‘Now as my eyes kept looking in the dream at Prime Minister Boris Johnson sitting in this fragile antique chair, I began to feel a great sense of DANGER THAT AT ANY MOMENT THIS VERY OLD AND VERY EXPENSIVE ANTIQUE CHAIR WOULD BREAK UNDER THE HEAVY WEIGHT OF OUR NEW PRIME MINISTER. So I began to pray fervently in the dream for PM Boris Johnson that the fragile and expensive chair would indeed hold his weight and that it would not break and that he would certainly not fall and that he would remain safe and secure while sitting on the fragile chair while in the presence of Her Majesty the Queen and the Nation that was watching closely at their meeting which was taking place.

‘But as I was praying in the dream, suddenly I heard THESE WORDS,

“WATCH AND PRAY FOR THE NEXT FOUR MONTHS WILL BE MARKED WITH GREAT UNCERTAINTY AND DANGER FOR PRIME MINISTER BORIS JOHNSON AND HIS CABINET, FOR THERE WILL BE THOSE WHO WILL RELENTLESSLY SEEK TO UNSEAT HIM AND TO BRING DOWN HIS GOVERNMENT”..!

‘On hearing those words in the dream, I began to CRY OUT FOR THE NATION ONCE AGAIN..! And suddenly the dream shifted and I saw the Queen stand up and I heard her say these words to PM Boris Johnson, “COME! DO NOT SIT ON THAT SEAT, IT’S NOT VERY STRONG OR STURDY BUT RATHER SIT ON THIS SEAT”..,and I watched as Her Majesty the Queen then led PM Boris Johnson to the CHAIR OF WINSTON CHURCHILL, and I watched as PM BORIS JOHNSON THEN SAT DOWN UPON THE LARGE AND COMFORTABLE CHAIR WHICH HAD BELONGED TO SIR WINSTON CHURCHILL. PM Boris Johnson smiled and then continued his conversation with Her Majesty the Queen which lasted for a SHORT WHILE, he then got up from the Churchill Chair THANKED HER MAJESTY THE QUEEN AND LEFT TO GO BACK TO NO 10…! (I woke up)

‘As I have prayed over this dream the Lord clearly spoke to me about the next 4 MONTHS being VERY SIGNIFICANT MONTHS FOR THE NEW PRIME MINISTER AND HIS GOVERNMENT, the next 4 MONTHS WILL BE MARKED WITH GREAT FRAGILITY, UNCERTAINTY AND DANGER FOR PM BORIS JOHNSON AND HIS GOVERNMENT, there will be many that will seek to UNSEAT HIM, THEY WILL PLOT AND SCHEME TOGETHER HOPING THAT HE FAILS AND FALLS FROM HIS POSITION AS LEADER. THERE WILL BE THOSE WHO WILL RELENTLESSLY OPPOSE HIM BOTH TO THE RIGHT AND TO THE LEFT, MANY WILL WORK TIRELESSLY TO CAUSE GREAT EMBARRASSMENT FOR PM BORIS JOHNSON BOTH IN FRONT OF HER MAJESTY THE QUEEN AND THE NATION.

‘BUT!! WATCH there will come a SUDDEN AND SEVERE SHIFT ONCE AGAIN IN THE NATION AND THE GOVERNMENT where we will see the hand of GOD’S DIVINE INTERVENTION MOVING ON BEHALF OF OUR NATION AND FOR BORIS JOHNSON AND HIS GOVERNMENT.

‘I believe we will see PM Boris Johnson STAND IN A GENERAL ELECTION and the very fragile chair that he first sat upon will BE REPLACED BY THE CHAIR OF WINSTON CHURCHILL. [Underlining RB]

‘I believe He will sit upon this CHAIR, “THE CHAIR OF CHURCHILL” FOR A SHORT TIME AS HE SERVES OUR NATION UNDER THE WATCHFUL EYE AND FAVOURABLE HAND OF THE KING OF HEAVEN AND HER MAJESTY THE QUEEN OF ENGLAND.’

That prophecy has now been fulfilled, and we continue to watch on its closure.

Now, is it just ‘coincidental’ this news is logged as number 48 in my compilation of fulfilled prophecies? It is definitely unintentional – I certainly could not have planned it!  Also, note that 12 represents governmental authority and, with four very sturdy legs to Churchill’s chair, we therefore have 12 x 4 = 48! 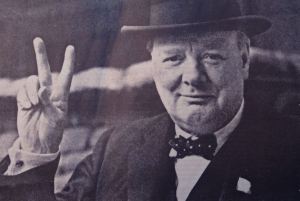 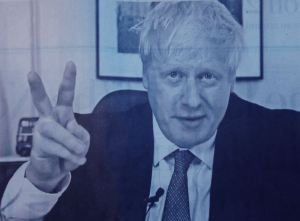 In An historic win in historic times – but where will Boris Johnson sit in Britain’s political history? Mick Brown notes,

‘Boris Johnson delivered a Tory victory that marks a seismic shift in national politics, comparable to Winston Churchill’s return as Prime Minister in 1951 in an election that would consign the Labour party to 13 years in opposition…’