Continuing from he previous post’s ‘jigsaw pieces’ and trusting you’ve noted them:

The ‘spiritual fallout’ since 2nd May, when I sat in as merely an ‘observer’ – so I thought, to the first video team-conference for convening One Voice 8 Feb 2020: The Prophetic Voice, has been waiting and watching for confirmations that the ‘atomic glory-bomb’ I saw in 1992 was not only a true, rather than false, vision but also significant for today.

In having had an immediate confirmation and further elucidation from Veronika West as she listened to my brief account, I sensed the Lord may bring it into manifestation much sooner than next year. So, when I received notice exactly one month later of the event announced below, and that it immediately preceded the 27th anniversary of that vision of the Lord’s glory exploding in Britain, I then saw how His ‘cookie could crumble’ – that is, discerned a possible picture emerging as pieces of His ‘invisible jigsaw’ fall into place – and indeed they did: 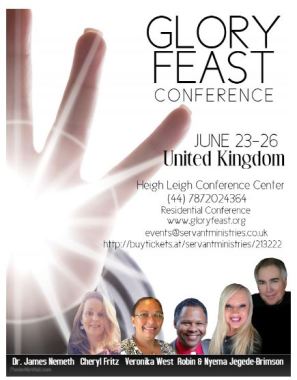 Conference convener Robin Jegede-Brimson, about whose prophetic alliance in South-east England I cover here, has today posted on his Facebook news of what happened, plus several videos, at this Glory Feast in High Leigh, Hoddesdon, Hertfordshire:

‘THE SWORD OF THE LORD IS BEING PLACED IN THE HANDS OF HIS WARRIOR BRIDE IN THIS SEASON, HIS BELOVED DAUGHTERS ARE NOW RECEIVING A FRESH OUTPOURING OF HIS ANOINTING AND HIS AUTHORITY TO WAR IN A NEW WAY, FOR A NEW DAY IN DAWNING UPON THE NATIONS OF THE EARTH!

‘THE GLORY OF THE LORD WAS SO HEAVY UPON ME AS THE SWORD FOR THE NATION WAS PLACED IN MY HAND I NEEDED TWO WOMEN TO HOLD ME UP; I BELIEVE THIS IS A POWERFUL PROPHETIC PICTURE OF WHAT GOD IS “NOW RELEASING” TO HIS BELOVED WARRIOR DAUGHTERS IN THIS HOUR, BY FAITH AS YOU CONNECT TO THIS POST RECEIVE, RECEIVE, RECEIVE WHAT THE LORD IS RELEASING, TAKE HOLD OF THE SWORD OF THE LORD AND BEGIN TO ADVANCE AND TAKE GROUND.

‘I hear the Spirit say, “MY BELOVED WARRIOR DAUGHTERS THE BATTLE IS RAGING BUT THE VICTORY IS ASSURED, ITS TIME TO ADVANCE, OCCUPY AND ESTABLISH MY KINGDOM PURPOSES UPON THE EARTH, FOR THE TIME OF BIRTHING HAS NOW COME”...! (Veronika West)

Continue to next posts for 6th and 7th ‘jigsaw pieces’.