The unreliability of Bigoted Brainwashing Clowns, aka BBC, as a source of information is demonstrated in this demolition of its ignorance. (See also recent post’s update alerting readers to BBC’s reporting less than 1% of terrorist attacks in Israel.)

On November 1st an article titled “Battle of Beersheba charge recreated for centenary” was published on the BBC News website’s Australia and Middle East pages.

In among an otherwise reasonable account of the commemoration of that First World War battle, readers found the following two paragraphs: 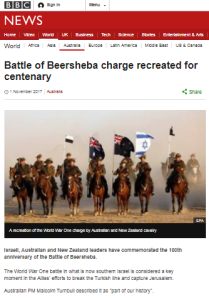 “The Battle of Beersheba led to the Balfour Declaration – the first time the British government endorsed the establishment of “a national home for the Jewish people” in Palestine.

While many Israelis believe it was the foundation stone of modern Israel and the salvation of the Jews, many Palestinians regard it as a betrayal.” [emphasis added]

The Battle of Beersheba took place on October 31st 1917. The Balfour Declaration was published just two days later on November 2nd 1917. Apparently though the BBC would have its audiences believe – as the use of the words “led to” indicates…