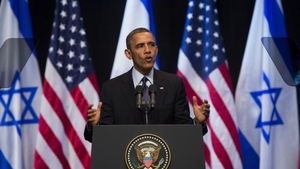 Under the above headline and lead-in published as Tuesday’s ‘Editor’s Pick’ in the Washington Times, leading Middle-East analyst Daniel Pipes opens with.:

One key shift in U.S. policy was overlooked in the barrage of news about Barack Obama’s eventful fifty-hour visit to Israel last week. That would be the demand that Palestinians recognize Israel as the Jewish state, called by Hamas leader Salah Bardawil “the most dangerous statement by an American president regarding the Palestinian issue…

in his Jerusalem speech last week, Obama suddenly and unexpectedly adopted in full the Israeli demand: “Palestinians must recognize that Israel will be a Jewish state.””

Pipes is of the opinion.:

That sentence breaks important new ground and cannot readily be undone. It also makes for excellent policy, for without such recognition, Palestinian acceptance of Israel is hollow, indicating only a willingness to call the future state they dominate “Israel” rather than “Palestine.”

The one-page article is very instructive, albeit concise, in its overview of the history of modern Israel and minimal on reference to America. If any reader is unfamiliar with these important facts then I recommend their reading the article (here). It is updated to include reference to hostility to Obama’s speech from a London-based Arab editor.

Last weekend’s Inside the White House from Bill Koenig reports.:

A naïve, idealistic and inexperienced 35-year-old is molding Obama’s Middle East foreign policy, which is leading the region to Armageddon –

How could that be? President Obama, who had very little real-world experience before he took the office, apparently doesn’t fully understand the great importance of surrounding himself with experienced Middle East staff.

Bill refers to Mark Landler of The New York Times’ article, Worldly at 35 and Shaping Obama’s Voice; ‘Benjamin J. Rhodes, a 35-year-old deputy national security adviser with a soft voice, strong opinions and a reputation around the White House as the man who channels Mr. Obama on foreign policy, has had a very significant hand in some of the great failures in the Middle East in the last three years and nine months.’

Landler reveals that Rhodes first came to prominence after he wrote Mr. Obama’s landmark address to the Muslim world in Cairo in June 2009. The speech was notable for President Obama’s assertion that governments should “reflect the will of the people,” prefiguring his policy in dealing with President Hosni Mubarak and Colonel Qaddafi.’

Koenig adds, ‘The speech Obama gave to the Muslim world from Cairo, Egypt in 2009, was filled with inaccuracies, falsehoods and total distortions, and was obviously written by someone unfamiliar with the region, the long history of the Israeli-Palestinian conflict or the depth of conflict between the Shiites and the Sunnis.

‘Just think’, writes Koenig, ‘Obama spoke to the Muslim world with a speech written by a young ideologue with very little real world experience, a speech that he gained much credit for, which further led to his responsibility for preparing and writing Obama’s major address to the Israelis this week.

‘Rhodes wasn’t even born at the time of the Six-Day War of 1967 or the Yom Kippur War of 1973. Furthermore, he’s had a major influence on some very serious decisions that have had horrible results…’

Postscript: As ever, Carolyn Glick’s insights and reservations made in advance of the visit make for an interesting read; see Obama’s mysterious visit. Also, my recent post on Raymond Stock covers the issues in some depth.]

From my perspective this is a most interesting development and yet another to thank the Lord for in answer to the prayer request and prophetic words published late last year. (See original post, with developments here and here.)