NOT AT ALL, in my humble opinion. Moreover, two prophetic dreams are included below and next I’ll post more news of how this word through Kim Clement applies to President Donald J Trump (also below).

It’s more likely all the ducks are being lined up…

and here’s one of several items I’d lined up for posting on Monday and this week, but which got waylaid until I was able to read and action Roger’s email of that day – all in unwitting accordance with Chuck Pierce prophecy about Monday 18th October: 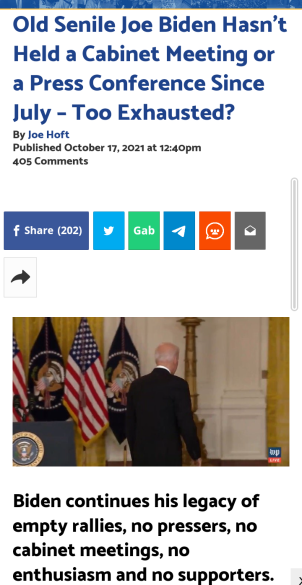 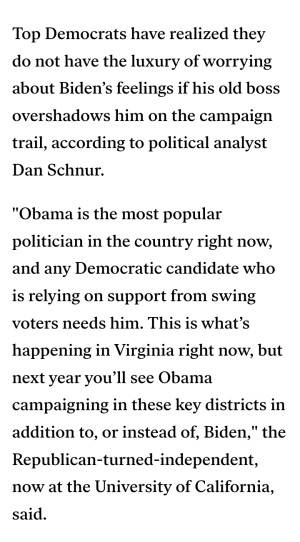 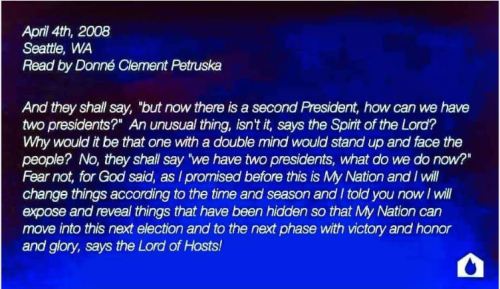 “And they shall say, ‘But now there is a second president, how can we have two presidents?’ An unusual thing, isn’t it?” says the Spirit of the Lord. “Why would it be that one with a double-mind would stand up and face the people?

“No, they shall say, ‘We have two presidents, what do we do now?’ Fear not.” For God says, “As I promised before, this is My Nation and I will change things according to the time and season and I told you now I will expose and reveal things that have been hidden, so that My Nation can move into this next election and to the next phase with victory and honor and glory,” says the Lord of Hosts!”

“…There is much blood on the hands of your leaders oh America, that the time has come for an account. Oh America, I have given you a window to repent and call out to ME and I will answer you and more are crying out to ME and looking to ME for the answer, says the Lord. There has been a changing of the tides in the Spirit and you shall see evidence of this in the natural as I shall shake the administration I shall shake their President and Vice and Secretary of State. I shall shake this unholy union, says the Lord, for they have spilled much blood and now much shall be required of them for it, as the Kingdom shall be torn away from Saul, says the Lord of Hosts, and just when Athaliah thinks it is up for grabs something unprecedented in your nation shall occur as I the Lord raise leaders up and I cause them to fall for they have desecrated what is Holy. They have mocked My authority. They have praised the gods of gold and silver, and principalities, oh Belthshazzar the hand is coming for the writing on the wall is at hand. ‘MENE MENE TEKEL UPHARSIN’

1 – Tony Puccio in Arizona posted in My Dreams and Visions on 9th October:

2 – Miles M Bennet, a  watchman in the UK, reports this dream-vision on 1st October:

‘This morning as I awoke, which at the time struck me as odd, but I could not see that it had any meaning. What is significant was that the dream remained clear in mind, as (as I type this) it still is. As the next two days passed it became clear in a series of revealings that the Dream was a Vision and was Prophetic.

I was in a room with an open upper window (the small type at the top of the casement that opens upwards): it was an upper story (1st story UK labelling) and a bedroom. As I awoke I was confused by what I saw: I was an onlooker but it felt like I was experiencing what the man in the room was experiencing: it was weird and, at first, I thought I was the man. This became clear when I realised that I was watching the man!

He is on the phone to someone. It is a windy day. Suddenly, a £10 note flies up into the air (the window is open) and is carried out, tumbling, into the garden. The man  says: “I have to go.” But, he is in his nightgown.

The interpretation took two days, but it is now clear enough – on the 3rd October 2021. The symbolism was revealed step by step. First, I was corrected about where I was in the Dream-Vision: I was an onlooker, but I sensed his panic and that he was in a conversation: it was two way. But I have no sense of what was being said. Second, (with that cleared up) that this was a Prophetic Dream. Third ‘the man’ is Joe Biden – hence the bedroom scene and the nightgown: ‘sleepy Joe’. Third, I guess that the ‘wind’ was the Holy Spirit moving: this is correct. Next the money is real money – £ Sterling not American $ – a Divine joke perhaps. Dollars are not British legal tender – that is the pertinent point.

So, the ersatz president is in his dressing gown, in his bedroom – sleeping Joe, when all the money blows away. He represents the American government and permanent political class – the number 10, scripturally, means perfection, completeness and order. It is the end of one set of figures (1 to 10) and leads on to the next (11-20). It is a junction.

This reflects a simple sentence the Lord gave me: “Things are about to change”. Vague, I’ll grant you, but I believe that this refers to the exposures that are occurring – even though in the main stream marxist media this is at the peripheries.’

PS, ‘I would just add a sense that I have – that the whole point of the nightgown, the bedroom and the phone call are that Biden is controlling nothing. However, I already know that Susan Rice is manipulating events – but I do believe that the Spirit is clearly pointing this way.

The financial side is clear – the sterling £10 note represents real money. Since I had the dream the White House has been claiming that the $3.5billion (or is it trillion?) spending spree equals $0! One of my background subjects is Economics – and yes, common sense IS correct: that is INSANE! I can ONLY suspect. My suspicion is that the $ may cease to be a global exchange currency – but that’s absolutely not from the Father. Outside that, it is the element in the Vision that has not been explained.’