In his weekly Koenig’s Eye-view From The White House published Friday evening, Bill refers to and provides links to information on past electronic and mail-in manipulation of electoral votes by Democrats…

Inside the White House

‘I can still not see Joe Biden and Kamala Harris being sworn in as the president and the vice president. Maybe that will happen, but this election is not over. We must keep praying for God to intervene and continue to pray for His eternal plan and will in this situation. Also, Praying for the peace that only Christ can give.

‘We have never had an administration more favorable to evangelicals. Millions prayed for President Trump’s re-election. The enthusiasm and excitement in event after event was enormous.

‘The Democrats tried to remove President Trump from the day he was elected. There have been lies, deception, fraud and sedition, all being facilitated by the majority of the U.S. media.

‘The most Hispanics and blacks ever voted for a Republican presidential candidate.

‘Trump’s constant emphasis of socialism and violence led to important gains in the House in a rebuke to socialism and defunding of the police. The Senate results were also exceptional for Republicans.

‘Does President Trump have a plan to expose voter fraud through electronic manipulation and mail ballots?

‘I know the experts advising the White House on how electronic manipulation works. I spent an hour with one of the top national experts in August. They know the names of the companies, how it is done and who is behind it. It is complicated. If anybody would expose this, it would be President Trump.

‘President Trump may be letting everything play out with the final vote count while putting things in place to challenge the results and then let it rip. He also could be allowing the media and others to set themselves up.

‘The following is a video interview of General Thomas McInerny (retired) by Steve Bannon.

‘Below the McInerny interview are details on the Hammer and Scorecard vote manipulation vehicle.

‘Steve Bannon interviews General Thomas McInerny (retired) on voter fraud and ‘The Hammer’ And ‘Scorecard’ – https://streamable.com/502nww  (Note: This video was removed this afternoon for violating terms of service. Obviously, due to the important content.)

‘Here is another location of the interview of General McInerney. Gen. Mike Flynn’s attorney Sidney Powell is in the beginning: https://americasvoice.news/video/UL4teOK6d1jG0kW/

‘The Hammer’ And ‘Scorecard’: Weapons Of Mass (Vote) Manipulation?
https://www.technocracy.news/the-hammer-and-scorecard-weapons-of-mass-vote-manipulation/

‘The American Report – Fanning, McInerney interview on Hammer and Scorecard

‘Counting: Three pieces of paper. The main envelope, the envelope with the ballot and then the ballot. Once recorded, it is hard to reverse the vote. Not allowing Republican vote observers in Pennsylvania, Wisconsin, Nevada and Michigan is corruption.

‘Not requiring states to have the votes in their possession on election day also leads to fraud. Where ballots can show up to make up the vote differences. I know of cases in Southern California, New Mexico, Florida and Minnesota where Republicans were defeated by late arriving ballots that were fraudulent. They all found that once those ballots were recorded, to remove and/or reverse them can be complicated, legally challenging and costly.

‘Counting mail-in votes prior to the election facilitates election day results. That should be legally required.’ 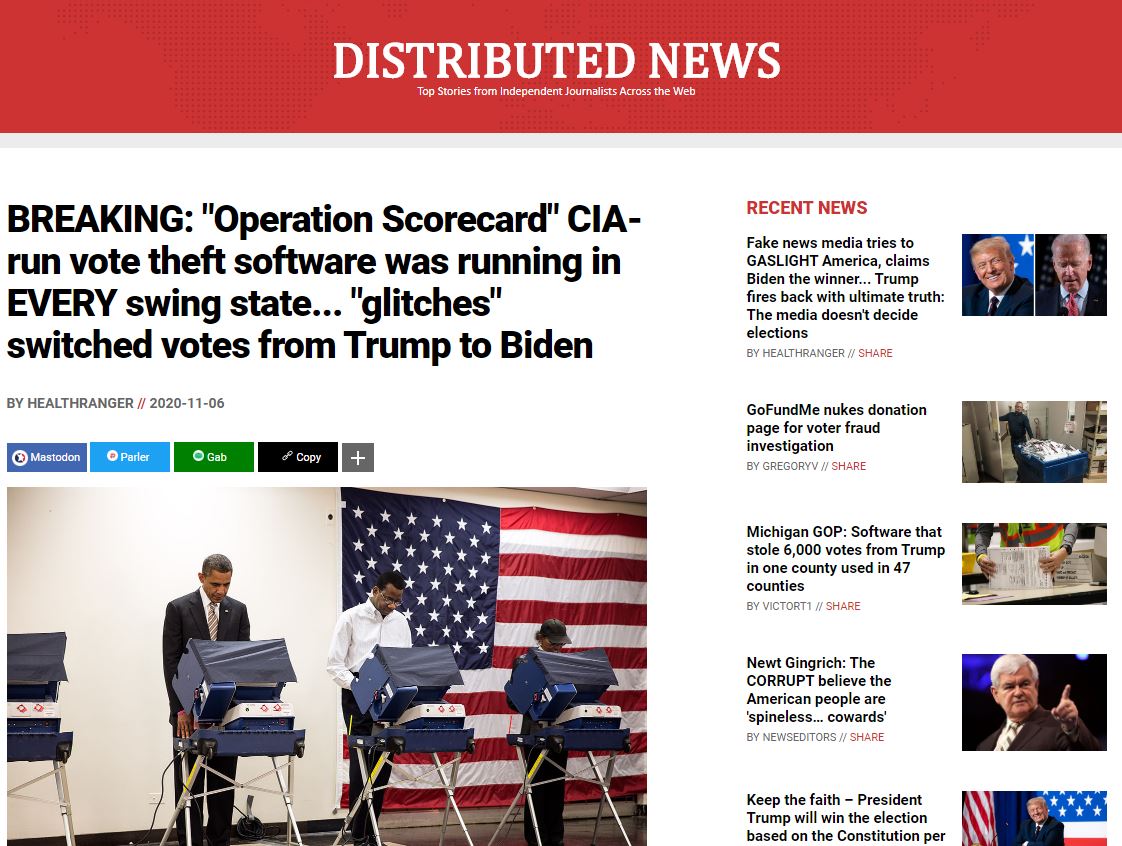 Koenig’s World Watch Daily is one of my prime sources during the last two decades. An independent editor/journalist accredited with and based in the White House, Bill Koenig closely monitors key world indicators from a perspective of Bible prophecy.