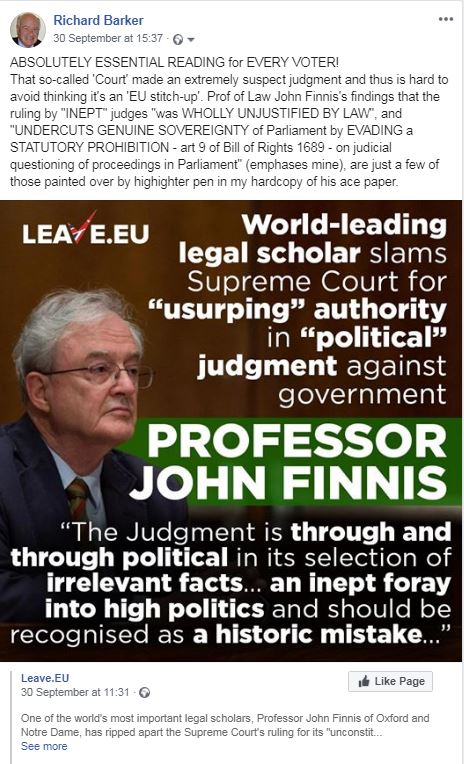 ‘Entangled in politics, the court has wrongly seized supreme power‘, thus runs Juliet Samuel’s excellent Saturday Comment on 28th September. Here’s a few snippets, as usual all emphases are mine:

‘The first clue as to the unsoundness of its judgment is that, just five years ago, it reached exactly the opposite conclusion on a crucial principle. The Crown’s power to prorogue has always been treated “a proceeding in Parliament” – a category of power explicitly protected from judicial interference by the 1689 Bill of Rights. In 2014, the Supreme Court itself ruled that the Crown’s actions in Parliament were sacrosanct and “cannot be questioned”.

In her introduction Juliet reviews public reaction to the ruling and then asks, ‘Among the chattering classes, the Supreme Court judgment was hailed by all as a humiliation for the Prime Minister and a shocking indictment of his government. Now, though, as the storm of performative outrage and hypocrisy abates, the focus is rightly returning to the content of the judgment itself, raising a profoundly uncomfortable question. What if the real destroyer of democratic norms, the real, dangerous insurgent, isn’t the Prime Minister, but the court itself?

‘It’s hard to reach any other conclusion after reading a damning critique of the judgment written by John Finnis, the Australian legal philosopher, and published today by Policy Exchange. Finnis, who counts Supreme Court justices from Australia to the US among his former pupils, unpicks the judgment in 14 bleak pages, in which he explains that it is “through and through political”, a “usurpation” of supreme constitutional power and an act of irreversible damage to the rule of law.’ 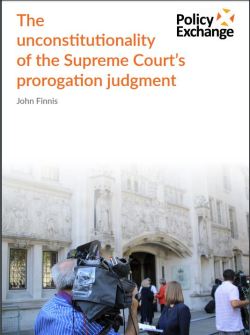 Policy Exchange is ‘an independent, non-partisan educational charity’ and claims to be the UK’s leading think-tank.

A pdf version of Professor Finnis’ paper may be obtained by clicking on the image of its title page shown left (note: not new window).

It begins with a useful Executive Summary of incisive, informative introduction, which I are here followed by only a couple of the several pertinent points Finnis makes:

‘The Supreme Court’s judgment in Miller/Cherry [2019] UKSC 41 holds that Parliamentary sovereignty needs to be judicially protected against the power of the Government to prorogue Parliament. But the Judgment itself undercuts the genuine sovereignty of Parliament by evading a statutory prohibition – art. 9 of the Bill of Rights 1689 – on judicial questioning of proceedings in Parliament.

‘The Judgment was wholly unjustified by law. What it protects is not the sovereignty of Parliament, properly so called, but the practical opportunities of each House to pass Bills and scrutinise the Government – all redescribed as the “principle of Parliamentary accountability”. Those constitutionally vital opportunities, and that principle, have been protected for over 300 years, without significant mishap, by constitutional conventions which are policed politically, ultimately by the electorate….The Judgment offers no plausible reason for transferring the conventions about prorogation into the domain of justiciable law.’

‘In its content (as distinct from its law-creating effect) that assessment of risks is neither legal nor constitutional, but purely political. Thus the Court suddenly assumes supreme responsibility for the maintenance and preservation of the pivot of the constitutional-political order. It does so without mentioning that it is replacing some main elements of a constitutional settlement that has given effect, for hundreds of years, to certain tried and tested political assessments and judgments…’

‘The Supreme Court’s review of the decision to prorogue ignores most of the immediately relevant statutory and political constraints and contextualising factors, and illustrates the ineptitude of judicial forays into high politics…’

My hard-copy of the rest of his document is heavily painted over in orange highlighter and the brief chapters of which are titled:

’30. So the Judgment is more a mistake than a victory for fundamental principle. Its consequences will be far indeed from “one-off”, or even “exceptional”. No doubt the next Parliament might appropriately exercise its authentic law-making sovereignty to reverse the Judgment’s misuse of judicial power. But legislation on prorogation, or on the relations of Crown and Parliament more generally, or on the limits of justiciability, can do little to undo the damage done to the rule of law, and to our constitutional doctrine and constitutional settlement. That could only be undone by a change of heart, a reconsideration of what it is to exercise a truly judicial power.’

I trust my time spent on this may be of some help to other who are deeply concerned over these political-legal developments.