As if that reference to prophet Amos’ vision of a plumbline being applicable to us today – not just millennia ago! – wasn’t enough, a big bombshell exploded later on Sunday!  I’m grateful to those readers who felt led to join a ‘prophetic presbytery‘ and consider, weigh and comment about Amos 7:7 – but now I risk possibly upsetting many!!

On binning the remaining parts of the previous day’s broadsheet newspaper (7th Sept) I paused to reconsider whether or not to read a featured article. Definitely NOT attracted to its title or content, nevertheless I got ‘poked in the ribs’ to, at the very least, quickly scan-read.

Only then did I realise it’s importance – the author’s descriptions of Dominic Cummings’ character and motivation mirror three prophetic visions and words!!!

The broadsheet title and strap-line read,  ‘Dominic Cummings, the college years – Was the ‘scariest man in Downing Street’ always this way? Lebby Eyeres, a university friend of the master strategist, reveals all. [Dominic Cummings was my ‘loner’ friend – now he’s running the country]  She starts her piece as follows: 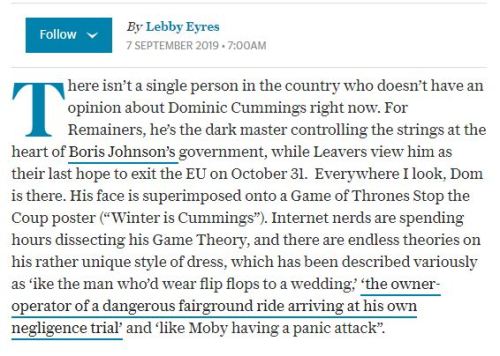 Blown away by her prophetically-related remarks I grabbed a yellow highlighter, as may be seen below: 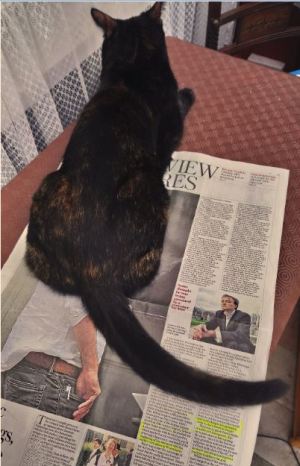 Kitty has a thing about newspapers and being where I’m looking! 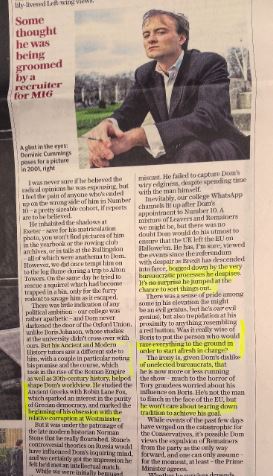 Here are the sections that fist-like, grabbed my attention (all emphases mine):

‘…his Ancient and Modern History tutors saw a different side to him, with a couple in particular noting his promise and the course, which took in the rise of the Roman Empire as well as 20th century history, helped shape Dom’s world view. He studied the Ancient Greeks with Robin Lane Fox, which sparked an interest in the purity of Grecian democracy, and marked the beginning of his obsession with the relative corruption at Westminster…

‘He has, I’m sure, viewed the events since the referendum with despair as Brexit has descended into farce, bogged down by the very bureaucratic processes he despises. It’s no surprise he jumped at the chance to sort things out…

‘Was it really wise of Boris to put the person who would raze everything to the ground in order to start afresh in charge? The irony is, given Dom’s dislike of unelected bureaucrats, that he is now more or less running the show – much to the horror of Tory grandees worried about his influence on Boris. He’s not the man to flinch in the face of the EU, but he won’t care about tearing down tradition to achieve his goal...

‘None of this criticism or hysterical hatred will be bothering Dom, who has no desire to stay in government long-term, but the failure to deliver any form of Brexit – the first step in his masterplan to reorganise Britain – would certainly wound him…’

Now consider the vision and a prophetical musing I had, followed by Veronika West’s detailed vision similar to the first but over 4 years later:

1. Vision of a Bulldozer (Oct 2014) – ‘Hovering’ in front of me and ‘through’ the seats, my eyes about level with the top of its track and towards the rear, was a dark blue version of the massive dozer shown above. But this one was much bigger! Its height, width and length were over 3/4 those of the hall and its very tall blade-end stood towards the stage where the team was praying.

‘Within minutes I heard it start up with a deep-throated roar and I could imagine smoke bursting out of its vertical exhaust, like those huge American trucks. (NB: the difference between voluntary mental imagination and involuntary visual/auditory impressions.)

‘This may signify that, in response to the meetings and prophetic words, declarations and intercessions aligned with His will, the Lord’s host will bulldoze through all demonic opposition. Also, it could mean they’re getting ready to clear away rubble after He has shaken and demolished ungodly human institutions and activities.’

2. My prophetical musing in May 2016 Is the Lord Exposing Rotten Politics? USA, UK – next EU?? – ‘In re-posting a prophetic word on this month’s ‘Domino Effect’ I speculated that there may be more than one trail of ‘prophetical promises’ Patsy Southway saw, and where it has a counterpart elsewhere. To recap: ‘I cannot but think one of those domino-trails is in the secular world in view of recent, unexpected exposures of political activities. Eg., of anti-Semitism in the Labour party and its leader’s concessionary Mayday speech; of David Cameron’s ‘gaffe’ to the Queen and Archbishop about ‘fantastic’ corruption in Nigeria (read its president’s reaction here); President Obama’s unwelcome interference in the UK/EU Referendum and now his aide Ben Rhodes’ outrageous boasting about their manipulating media lackies with fiction and duplicity over the Iran nuclear deal…’

That led to a series of fulfillments of prophecy upon exposing corruption (#10).

3. Veronika West’s vision last January and word on A Work of Divine Excavations –

‘Yesterday as I looked at this picture of Boris Johnson standing on a platform delivering a speech at the JCB Plant, the Spirit of God immediately began to speak to me concerning the Nation. Now as I listened, I began to pray in the Spirit and I was caught up in powerful vision where I saw these words being written over the Nation, ‘CAUTION; EXPLOSIVE DEMOLITION IN PROGRESS; NATION UNDER CONSTRUCTION’,

‘Now as I looked at those words, suddenly I saw DOZENS OF GREAT BIG YELLOW JCBs BEGIN TO MOVE ACROSS THE NATION, as I looked again at the Nation in the vision I watched as these great big machines began to move and clear what looked like years and years of dirt and debris that covered the face of the Nation, I watched intently as these great big YELLOW JCBs were hard at work, moving, removing and clearing the land, now as I stayed watching in the vision, suddenly I began to see what looked like the old and original foundations of a building and as I looked at the bare foundations of the Nation, I heard these words in the realm of the Spirit…’

Thank you to Jean Foy for sending this quote from The Spectator:

‘The conversation in one of the Conservative WhatsApp groups last night took an unexpected turn when Brexiteer Steve Baker shared a passage from the Bible, Romans 12, which he said he hoped would ‘help us individually and together to succeed in the midst of difficulty’. One of the verses in this part of scripture tells readers that ‘if your enemy is hungry, feed him; if he is thirsty, give him something to drink. In doing this, you will heap burning coals on his head’. Baker asked his colleagues ‘not to reply in kind but to bless those who curse us’. It’s not clear whether everyone will heed his advice, but what is clear is that some of the comments from ex-colleagues have irritated Conservative MPs sufficiently to make them want to get on with one another a little better.’

Inspired perhaps by this posting Why Leave the EU? today posts this from BBC News of Feb 2014: Corruption across EU ‘breathtaking’ (Chief of EU Trade Commission)