Here’s a few shots of significant news and articles over the weekend and this morning’s banner headline – note soccer shocker too!  The biggest boys booted out of 2018 World Cup – Germany, Argentina and now Spain!  Is it an omen against the EU? Belgium did win their match with England but it was against our ‘B’ team (like our government’s not yet firing at full strength with Brussels) and we’re not out of the Cup.

MOREOVER, “many a true word is spoken in jest!”  My jest in previous post on Brexit at long last becoming UK Law at the ‘coincidence’ of it as Fulfilled Prophecies #31 being a numerical mirror reflection of the one in that series on the EU’s fall (#13) – ‘unlucky for some’ – I now find is very relevant. (See below, and in a new series appearing this week.)

Also, it is another demonstration of the first ‘Circuit Prophecy’ Leisa Ebere brought last October:

“2018, I will impart to My Prophets the ability to see clearly ‘My Numbers’, such as dates, times and even denominations of money as I loose significant detail and even finance…”

Kitty thinks newspapers have their better uses; either as mat for sitting or being hard-massaged upon, or as a prey to attack and savage, but best as a tent to hide under or else to ‘wear and tear’.  Now, let’s move from my mog to Theresa’s Mogg:

“Why read about Mutti when it’s playtime!” 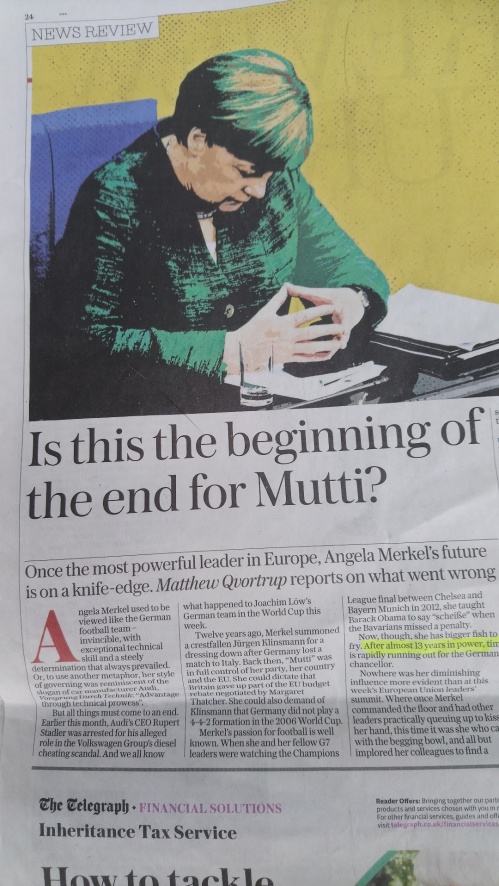 Perspicacious analysis and insights from the author of ‘Angela Merkel: Europe’s Most Influential Leader’ – note highlighted ‘After almost 13 years in power, time is rapidly running out for the German chancellor’. [Saturday 30 June 2018, Daily Telegraph]

John Bolton, US National Security Advisor, regarded as most geo-politically informed statesman brought encouragement to the European Research Group from Donald Trump. The report does not say whether or not its chairman Jacob Rees-Mogg MP was present [1 July 2018, Sunday Telegraph – Diego Maradona reacts with despair as Argentina loses.]

Fascinating contrast of Mogg on PM May with briefing header on Merkel [2 July 2108, Daily Telegraph]

You may like to read Jacob’s highly informative op-ed in which he supports PM May by referring to a hymn’s petition to Jesus Christ, and note his closing advice:

‘The Prime Minister’s greatest virtue is her dutifulness, without a Parliamentary majority and with a cabinet that has forgotten Lord Melbourne’s definition of collective responsibility “it is not much matter which we say, but mind, we must all say the same”, nonetheless she carries on.

‘Perhaps the vicar‘s daughter is inspired by the hymn “Jesus good above all other, gentle child of gentle mother in a stable born our brother, give us grace to persevere”. It is certainly a grace she has been given in abundance and it is also her great strength….

‘At Chequers the Prime Minister must stick to her righteous cause and deliver what she has said she would, she must use her undoubted grace to persevere.’  [Mrs May has made many promises on Brexit, now she must keep them.]