Write down the revelation and make it plain on tablets so that whoever reads it may run with it. For the revelation awaits an appointed time; it speaks of the end and will not prove false’ (Habbakuk 2:2-3 NIV)

Thursday 23rd June 2016 – Independence Day for Britain, was very busy with email and blogs. Based on that information I decided to really stick my neck out with a prophetic declaration about a ‘New Day’ BUT then our internet/ phone line got dug up, flooded out and cut off!!

As suspected the previous day, there seemed to be some opposition from gremlins – the next day it came out into the open! Thursday16th a hole was dug in the pavement for an engineer to access location of the phone line’s fault the next day, but he found problems and needed another hole digging at the other side of our two-car driveway to make a fresh connection from the house to the street’s main-line. 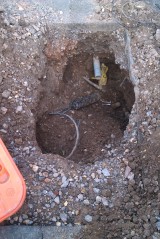 But on Tuesday contractors arrived and back-filled and asphalted that first hole. The engineers had been able to advance their new work a fortnight because three weeks had elapsed without our having any phones. So those contractors returned on midday Thursday to re-open the hole that had been re-filled, and dig another new one!

Nina had been delayed by two lots of severe road works whilst out and so we voted after lunch between showers. I went back online to blog the most important posts of that voting day BUT found the internet had crashed!! I went to find out what the guys had done and found the re-opened two and half feet deep hole half filled with rain water and almost drowning the telecoms 15″ joint-box!!

But I was determined to go ‘out on a limb’ and push to get a declaration published. Fortunately I have web-guest access at the Acorn Christian Healing Foundation half a mile away. So, thankfully I could complete the previous two posts on the exposure of economic lies against Brexit and New Day of Independence from the EU.

Next Day – a few hours after voting results were announced – the engineer team returned to complete the work and by lunch-time we had a properly working phone and internet line at normal speed. Thank you Lord. (Apparently a normal access pit cannot be installed because the power and gas mains are too close.)

Voting day’s first blog mentioned my remark about Britain’s guardian angel at the previous evening’s prayer meeting. Apparently, this fired up the convener Caroline to pray whilst driving home and upon arrival was greeted by a huge confirmatory clap of thunder -confirmation! I emailed,

‘Whilst we stood in a rough circle I kept getting the impression of a huge outline of Britain hazily hovering a foot or so off the floor between us. It was as though we were standing as giants all around and looking down on Britain with backs turned towards Europe and Scandinavia (I didn’t share this as we were visitors and I didn’t know if it would be appreciated)
I was positioned by the ‘Isle of Wight’ and, after Neil read about Jesus telling Satan to get behind him, I was moved to declare that S in Europe get behind and away from Britain.

Also, I saw a huge Rock tear through the ‘map’ and emerge over a larger area (ie North Downs to Scottish borders) than when I saw a similar spiritual rock emerging 12 years ago (https://richards-watch.org/2011/08/18/comments-on-sharon-stone-collapse-of-society/ refers)’

I received an email  from another leader saying on Tuesday they felt the Lord powerfully upon them and sensed Him saying, “Thursday would be a NEW DAY for Great Britain”. As I’d woken up with that in mind too, this encouraged me to stick my neck out and use it in a post’s title.

Also, I had news from Prophetic Releasers for UK Revival that some of their people had been hearing similarly: eg. that one had kept getting the outcome had already been declared in heaven!

Thank and praise you Lord that it is now manifest…

PS. It was an hour or so later that I became aware of this morning’s Telegraph headline, ‘Birth of a new Britain’!!