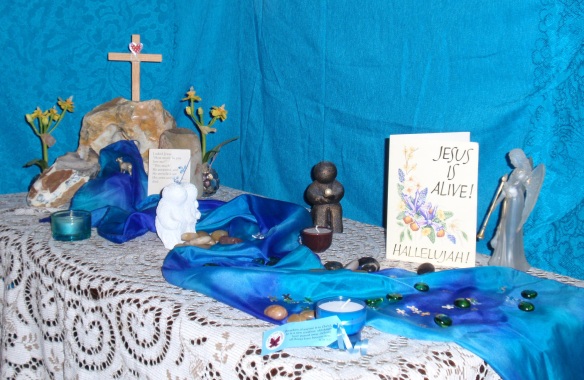 At this time every year Nina creates a tableau for contemplating Jesus Christ’s death and resurrection. She’s inspired about what items to collect and arrange, usually including a rock with a central hole eroded by the sea and which we found on a beach. It serves as both the ‘skull’ and garden tomb of Golgotha. For example, the above display has a scarf as a ‘river of life’ flowing out of the empty cave/tomb below the cross. (In 2012 it gave an insight that I’ll share below.)

A slightly different display is set up each Maunday Thursday, the night of which Jesus and the twelve leading disciples ate Passover Seder early (see video explanation). Following the meal, one disciple betrayed Him by leading Temple guards to capture Him at night for trial by a ‘kangaroo’ court of Jewish leaders.  It was a foregone conclusion that they would demand authorisation of His death from Pontius Pilate, the Roman Prefect, or governor, of Judea.

If you’re unfamiliar with this true story and how it led to Jesus’ gruesome torture, death and burial followed by his amazing bodily resurrection and appearance to His disciples, read doctor Luke’s investigative account and the personal account of Jesus’ closest disciple John. (Later, a Jewish leader violently opposed to them but who encountered Jesus en-route to Damascus would write He was seen simultaneously by over 500 – 1 Cor 15:6)

A Bit of Theology

Jesus Christ died so that each of us may be forgiven for our sins. As a result of this new status, we now have direct personal access to God. As the Son of God, He suffered on our behalf as our ‘scapegoat’.  That is, Jesus took the place of death that we deserved because of our sinfulness, for the shedding of a sinless one’s blood was the only way our status could be changed for us to gain personal salvation. Apostle Paul put it thus to the Romans:

8But God demonstrates His own love for us in this: While we were still sinners, Christ died for us. 9 Since we have now been justified by His blood, how much more shall we be saved from God’s wrath through Him! 10 For if, while we were God’s enemies, we were reconciled to Him through the death of his Son, how much more, having been reconciled, shall we be saved through His life! 11 Not only is this so, but we also boast in God through our Lord Jesus Christ, through whom we have now received reconciliation. (Romans 5:8-11, NIV, see whole chapter.)

Now, when I was a new Christian I found that rather hard to understand – but it works! The theological term is ‘atonement’, or ‘substitutionary atonement’.  In bringing forgive-ness to the guilty, however, this can cause deep problems for those who’ve been the victim of crimes. After all, why should a killer find forgiveness by God? And what about the victim’s families, or the victim of abuse? They find it very hard if well-nigh impossible to forgive.

In 2012 I heard a Portsmouth prison chaplain address this issue with a concept taken from the criminal justice system: restorative justice. This involves active dialogue between victim and offender, plus reparation.  And it has a sound basis in  theology. How?

Jesus was a guiltless victim, directly of those who wanted Him killed, and indirectly of everyone’s ‘fallen state’ of sinfulness, which could only be rectified by His death.

And Almighty God, the Father, is a victim too. How? He’s victim of humanity’s rebellion against Him. For example and especially over the way religious leaders murdered His son – how they seethed with rage when Jesus denounced them! (read Luke 20:9-19).  So, every victim can find an identity and affinity in both God and Jesus Christ in their situation. Hence, they can receive God’s own ability to forgive because He will help them choose to forgive those who’ve harmed them. [Lack of forgiveness may be the only thing that hampers God – see Matt 6:14-15]

A Tableau in Time

During contemplation upon the tableau illustrated above, an insight dropped into mind that the Resurrection created a distinct point in the flow of, or perhaps even a change in, time itself. That is, the now termed ‘common era’ calendar is the medieval Christian one that counts years from the approximate birth of Christ as ‘anno Domini’. But in fact, a more powerful one would be the point at which things in heaven changed and thus affected our lives on earth and its ultimate role in God’s scheme of creation. This took place at the Resurrection of Jesus Christ, His revival to life from death itself. 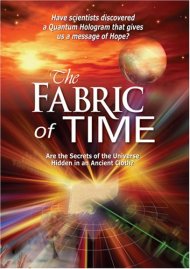 That such a concept may be valid can be found in the discoveries about the material of the shroud in which Jesus was thought to have been carried and covered during His interment, known as ‘The Shroud of Turin‘. It is of astounding significance when examined from an understanding of quantum physics!  It can actually be regarded as a ‘singularity’, which is the term used for the starting point of the creation of the universe, or ‘Big Bang’. Don’t take my untutored word for this but consider particle physicist Isabel Piczek. She is also a monumental artist and award-winning figura-tive draughtsman. Consequently, her very detailed analysis of theories about how the shroud’s image was formed is fascinating and authoritative (see first of several detailed articles here).

This scientist’s conclusions about how the image was formed are astounding – it seems that the image of Jesus can only have been created by its hovering equidistantly above and below his reclining corpse. And furthermore, this necessitated the body’s levitation – perhaps not an impossible feat during the moment of resurrection power-blast? After all, the disciples had witnessed Jesus walking on water!

We have a piece of cloth and it leads us to a mysterious gate which opens for us, and it lets us see a completely different world, an extraordinary world with extraordinary laws.

You can consider these claims by watching this 19 minute video extract from the DVD The Fabric of Time (please bear with initial advert).

PS: the republished version of this post closes with a fascinating update and another investigation: He IS RISEN! Surprising Scientific Facts of Jesus’ Burial Shroud.