With the phrase “in the regeneration” of Matthew 19:28 emblazoned in mind and setting a seal of expectancy for our short holiday, I was also alert to another claim.

At the back of my mind about the gathering in Cardiff was a reference I’d read to its being of ‘strategic importance’.

I must be frankly honest, however, for on checking all through the ‘flyer’ I cannot find what I saw and read – but in my opinion, it was indeed an important meeting for changes going on in the wider church

To continue from the 2nd part of this regenerating week in South Wales, on leaving Ffald-y-Brenin via Fishguard we headed south and eastward for Cardiff and thence to Cwmbran for the evening’s scheduled ‘Outpouring’ service at Victory Church.

That was our intention but we got halted when a large, sliding mirror met my big toe!

There was time to book into our hotel in Cardiff and have a bite to eat before heading for Cwmbran. However, on unpacking and hanging my clothes in the wardrobe its mirrored sliding doors jammed and somehow one door dropped on my left foot – OUCH! A first aider and manager were soon with us and ice pack padded my blue toe-nail. And in the heat we found the air conditioning unit didn’t work. The upshot was a move to a larger room and free drinks with our meal. The outing to Cwmbran had gone out of the window.

But there was a track record for such setbacks being an indicator of a terrific time coming up next – and remember the promise in Prophecy of a roller-coaster ride – get ready…?

Back in 2005 we attended a week-long school on the supernatural in scripture. It took longer to arrive in that Midlands town than planned but, with only 5 mins to the school’s start, I found a nearby car-park and arrived at the venue in time. At lunch-time we went to book in at our hotel and grab a bite of lunch.

“Your room’s been cancelled Mr Barker!” the hotel’s receptionist told me.

“Our note says you phoned at 10:25 this morning to cancel…” was her reply.

“Ridiculous! That was about the time we parked in town for the event we’re attending !”

It was a most instructive week. Although trained thoroughly in healing and deliverance at Ellel Ministries we’d not had such in-depth instruction for 12 hours/day in these aspects of the Bible. I asked tutor Todd Bentley, “Where were you 40 years ago?”. Had all this knowledge and instruction been available when I was a teenager, I wouldn’t have sought it from Eastern religions and the New Age (see Searching for truth leads me into captivity).

I recall looking at the large local parish church’s cemetery opposite the school’s venue of an old converted cinema. The thought struck me that church was as dead as those in its massive graveyard! (Hence my remark in the previous post.)

So now, with throbbing big toe and its purple-blue nail I was hoping for an exceptional time. And we had just that!  Thank you Lord God.

How can words describe what was heard and experienced? I’ll try with a few snippets after this shot of us between the ladies’ raised arms…

Three worship sessions daily were literally ‘out of this world’. On one occasion it seemed as though not only the entire 300-odd assembly but also the room were suspended high in orbit (maybe between earth and moon?).  The ceiling with its thick beams became a vast window/skylight through which dark space and stars could be seen. And the sound of our worship at times was like what I’d heard in Newport at the foot of the ‘Hill of Angels’.

[I recalled the sound of angels joining with spontaneous worship at the Revival Alliance in 2012.  It got captured on cd and the contractor sound engineer testified that there were instruments registering which they’d not connected. And the way spotlights were spinning in time to the music was wonderful. An ‘invisible jigsaw’ falls into place refers.]

The convener Justin Abraham’s sessions were very good, especially his emphatically stressing that a deep, burning desire to know Father God is essential for entering heavenly realms. And it’s key to everything taught at his gathering.

I was interested in seeing how the two main teachers Paul Keith Davis and Ian Clayton would deliver their different subject material. Each has a sound understanding of our living Lord and his word, yet have their own distinct experiences and style of speaking 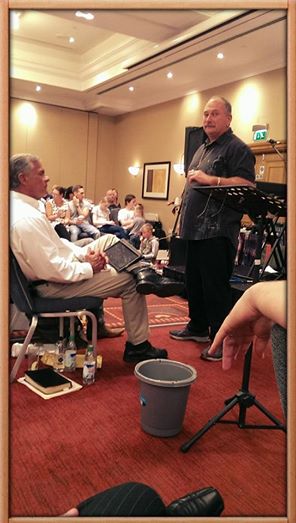 We’ve known of Paul Keith since we heard him in Bath several years ago, and have attended some of his UK conferences as well as following his regular newsletters.

In those early days he once went by, heading towards someone else, but glanced at us. In doing so, he spoke an awesome personal word about Jesus’ return that remains etched in me.

The timing of that word’s fulfillment may present a personal problem, so I presumed. However, it so happened that Ian Clayton would teach upon longevity!

It’s 2 years since we first went to Well Church International and Ian was due to teach. He brought novel insights into scripture and on getting close to the Lord. I was pleased to hear him speak about coincidences, but very surprised when he used the same description of it that had popped into my mind a few weeks earlier! (See closing Note to this post.)

So that ‘link’ enabled me to accept his explanation of ‘God-incidence’ and to appreciate his other material. Also, I able to follow and understand everything he was teaching on these novel, perhaps radical, and often scientific but biblical concepts.

Paul Keith opened the gathering with,

“I believe that we’re on the verge of something significant… the spirit realm is saturated, its bursting, we’re at a tipping point. You never know when..the next session might be the one,  the next prayer, the next prophetic word…We’ve got to keep doing what we know how to do and it will happen…”

As an example he mentioned how Jesus appeared to Maria Woodward Etter and then saw a Bible appear on her wall with the glory of God shining from it. Thus, she understood its entire content supernaturally, but Paul Keith was quick to say that doesn’t mean she didn’t need to study scripture. He continued,

“I’m just telling you that in a place in God we can connect with heaven, all the dots get connected. I’ve had some of the revelations where suddenly you see it and think ‘How did you miss that!’

“There’s great truths, there’s great mysteries in the Bible that are going to be revealed to this last days’ generation that have been there all along but we just haven’t seen them yet.

“The blind is about to be removed and we’ll see things we haven’t seen because God’s reserved them for this hour. There’s truth reserved for this hour to present the Bride of Christ without spot or wrinkle

And that was just to start…!

3 thoughts on “‘Days of Wonder’ gathering in Wales”