You may think this far-fetched – this is SO spooky, even for someone not fazed by the supra-natural, as hinted at in the story of my Journey.

Yet what happened late last Thursday is so weird it’s way beyond coincidental. Two years previously on that day this blog was launched with a ‘Welcome’, as well as some personal background. As recounted in the previous post, I’d mentioned watching a TV programme in 1980s about the Iran-Iraq war whilst flicking for the first time through a book I’d been given. But this time something exceedingly extraordinary happened.. 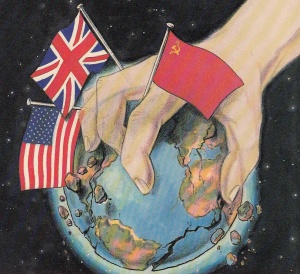 I’d never have expected what I wrote about precisely 2 years ago, on an event seen over 25 years before, to be similarly repeated now!

Remember, that was about elite units of Iranians and Iraqi enemy combatants, halting in their intense warfare to mount a full military exercise together to rehearse an attack upon and the capture of Jerusalem!

As mentioned in my mix-up over the blog’s birthday, my intention was to follow up on Baroness Warsi. I’d read the transcript of her recent Georgetown interview and noted part of her plans may line up with a recent prophecy for Britain. But in view of the ominous importance of what was going on with Iran and having blogged about the ‘Ezekiel 38 Alliance’, I once again needed to cover  that issue. (My early email updates to friends in 2009, starting with The End-Game is now in play, went on to cover President Obama’s back-door contacts with the Iranians in Today’s importance in History, which Debka had exclusively revealed along with clear betrayal of Israel, as their readers are reminded here.)

Therefore, after an unusually busy day I spent the rest of Thursday writing an Update on the ‘Ezekiel Alliance. After publishing and before closing down for the evening, I decided to check the latest news. On World Watch Daily I saw this leading headline:

The next day the headline had rolled down the front page, as below (click image for link to full story): 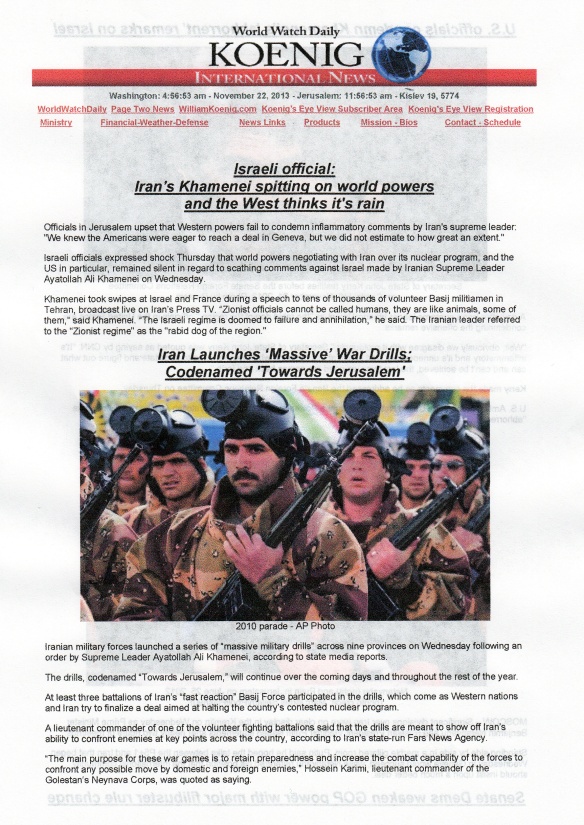 I recall reading elsewhere that these units were being deployed against undercover Saudi activities in distant parts of Iran.

So could the Almighty One be saying something in this highly unusual juxtaposition of timing regarding the strategies of those who oppose His plans and purposes for His people? People with whom He has not one but several personal, eternal covenants!

After realising how my thoughts and actions had been ‘engineered’ towards this global issue, I had to ask ‘Why?’.  My first impression was astonishment at how the Lord may have so muddled and juggled my days to bring me into this insight? I recalled that, in admonishing the early Philippian church to avoid grumbling and arguing (Phil 2:13), Paul wrote,

…continue to work out your salvation with fear and trembling, for it is God who works in you to will and to act in order to fulfil his good purpose.

I’m well aware that, on the other hand, in His sovereignty the Lord also lets those who prefer wickedness and hate Him get deeper in their prison (2Thess 2:10-12):

They perish because they refused to love the truth and so be saved. For this reason God sends them a powerful delusion so that they will believe the lie and so that all will be condemned who have not believed the truth but have delighted in wickedness.

His Will will be done on earth, as Nathan Morris heard at the start of 2012:

“For I would know that My people would hear My voice, that I am setting the stage for that which I have foretold in My Word and it will quickly and swiftly come to pass. For the days are coming when the lawless one shall be revealed and the son of perdition shall take his stand…”

Therefore, could the dramatic cover of Victor Dunstan’s book be prescient? Does it prophetically indicate the Lord is going to get a tight grip on events in view of what USA, Britain and Russia have now done in the Middle East?

Today, I read Obama has done such an extreme about face at Geneva that he,

…secretly agreed to elevate Iran to the status of seventh world power, as a strong inducement for signing the interim nuclear accord!

Jerusalem and Riyadh are aghast at this development. Our Jerusalem sources report that Prime Minister Binyamin Netanyahu, who has kept it back from his cabinet colleagues, has been holding back-to-back confidential consultations with the heads of Israel’s security and intelligence services and the high IDF command to decide how to handle Obama’s sudden replacement of Israel with Iran as America’s No. 1 ally in the region.

Most immediately, a hostile Iran with a role in the ongoing US-sponsored negotiations with the Palestinians does not bear thinking off.

The Saudi royal house is deep in similarly anxious and angry discussions.

The whole ‘ball-game’ has now changed and many pundits are busily proffering opinion. But, as we keep watch, let’s also keep looking up to Jesus Christ, the author and finisher of our faith (Heb12:2).

Last Thursday reminded me of how I’d been led through a string of coincidences over the Queen’s Diamond Jubilee Bells. (There were many more than are mentioned in that trilogy!)  Had one step not been taken, one item been missed, one event not actioned then the next step or event would not have happened and no insights gained. The whole was undeniably ‘God-incidental’.

Yet the way I was ‘set up’ last week was extraordinary! Had an awkward issue not needed attention, had I not mistaken the day the anniversary fell, had my starts at blogging not been thwarted, had I not been diverted from what I was to write, and had not the grave global issue of nuclear Iran coincidentally been taking place – then I would have spent last Thursday writing about the blog’s birthday and Baroness Warsi’s plans.

4 thoughts on “The Invisible Hand re-appears!”