World Watch Daily has a couple of leading headlines that could have been taken from 38th chapter of the prophetical book of Ezekiel. Quoting from Jerusalem Post, the lead headline says it all:

The article opens: ‘Significant divisions over Iran were on clear display in the Kremlin on Wednesday as Prime Minister Benjamin Netanyahu and Russian President Vladimir Putin issued statements after nearly two hours of meetings…’ (Photo below June 2012) 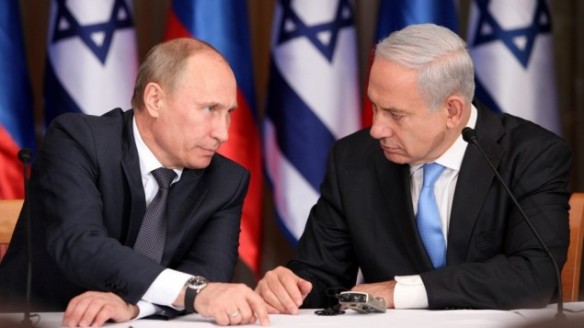 The second headline from William Koenig’s team in The White House quotes The Tmes of Israel and opens as shown below:

Further to last Thursday’s post about US  appeasement of Iran in Geneva (here), the following links bring detailed news and opinion on developments:

…That the radicals are calling the shots in Tehran was obvious to every Iranian from the large blow-ups of the intransigent ex-president Mahmoud Ahmadinejad adorning Tehran newspapers in the last couple of days. President Hassan Rouhani may be elected president, but his campaign of smiles to the West has been superseded by the radical nuclear line espoused by the man he defeated at the polls.  Ahmadinejad is riding high again in Tehran.

According to Debkafile there’s, ‘a strange paradox of two leaders, Ayatollah Khamenei and Prime Minister Netanyahu, who are implacable adversaries in all else, maneuvering (sic) with all their might for the same object of taking the wind out of the sails of a potential nuclear deal between the six powers and Iran.
‘Khamenei is confident he can bring President Obama to heel and force him to live with key elements of Iran’s nuclear bomb program. Israel wants that program brought a lot closer to its dismantlement by tougher sanctions. He is seconded in this demand by France in public statements by its president Francois Hollande, and Saudi Arabia, which prefers not to admit to supporting the Israeli campaign….’

The Iranian negotiators face the delegations of six world powers in Geneva Thursday, Nov. 21, with strict orders not to give ground on the two major sticking points holding up a first-step deal on their nuclear program: The heavy water reactor under construction at Arak for producing plutonium and Iran’s “right” to uranium enrichment. If Iran gains those two points, whatever concessions its negotiators may come up with are worthless, because they will leave Tehran in possession of two optional nuclear weaponizing tracks instead of one – plutonium as well as enriched uranium.

Debka states Tehran is fighting tooth and nail for Six-Power acknowledgement of its “right to enrich uranium” so Iran can come away with a “historic feat”. This will show the Iranian people that economic hardship suffered under economic sanctions was worth while.

BUT, existing infrastructure would enable Iran to top-up enriched uranium stockpiles to the amount needed for five nuclear bombs in less than 4 weeks! AND a second option of plutonium would also be available when the Arak reactor is finished! Can the Iranians be trusted? Debka then asks,

…what compromise can be expected when Washington failed to challenge Iranian leader Ayatollah Ali Khamenei’s avowal on Day One of the Geneva talks that Iran will not step back “one iota” from its nuclear rights, and his grotesquely barbaric rant against Israel as “the roguish, filthy, rabid dog of the region,” whose regime is “doomed to extinction?”

This degraded language, not heard since the Nazi German era, informed the Obama administration in the harshest terms that for the sake of a deal, Iran will not give an inch under pressure, whether from economic sanctions or from Israel and parts of the American Jewish leadership.

Debka states, ‘Khamenei also blasted US government as unworthy of trust. If…Obama was serious in his often repeated commitment to Israel’s security, he ought to have protested in some way against Khamenei’s unspeakable rhetoric, possibly even delaying the proceedings before they started their second day in Geneva. But the Iranian leader apparently got away with it, judging from the Obama administration’s mild response…’

How peculiar that not only Iran’s tip leader, but also those of Israel, Saudi Arabia and Egypt (and more) are all in agreement about the superpower that was, for decades, top-dog in the Middle East?  What’s the reason for this change? Could it be because America’s leaders have rejected the God and Jesus Christ, as their president did in his first inauguration by declaring the USA has never been a Christian nation (as here).

I recommend my readers use the above links to learn the rationale behind these claims. It reminds me of the great heavenly conflict with the demonic ‘Prince of Persia’, of which the prophet Daniel was informed by angelic messenger during deep intercession. (See Daniel 10:12, courtesy BibleGateway.com)

These serious matters are simply one demonstration of the Bible’s complete relevance for today. That is, it accurately forewarns of this dangerous situation for the Middle East and world peace.

5 thoughts on “Update on the ‘Ezekiel Alliance’”