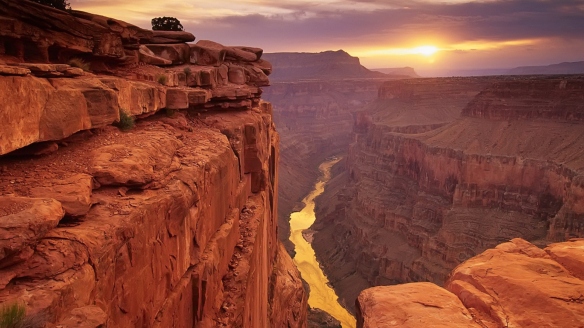 Am grateful to a critic of revival and the prophetic who castigates the promise of greater blessings and quickening power coming to the Welsh Outpouring, as declared by Chuck Pierce. (I will deal with that defamation later.)

My disquiet over this self-appointed heresy hunter’s claim made me dig into my records because, as mentioned recently, I knew Chuck had correctly foreseen danger 40 days before the 2005 London bomb attacks. (Those details, plus others for the UK, are now incorporated into my Library of prophecies as well as in some recent posts.)

Let’s now consider what Chuck said about the future of the United States.

In The River and The Schism (31st Oct 2008 *), Chuck refers to visiting that awesome primeval place (my emotion upon visiting) – the Grand Canyon. It very graphically reminded him of a vision he’d seen in August 2007,

It was then that the Lord began to show me a nation divided.  He has continued to deal with me from an intercessory standpoint to get prepared for a great schism that is coming to this nation.

…as the Spirit of prophecy began to fall I exclaimed what our nation would look like in the future.  I have not yet had the liberty to discuss all that I saw.

However, three years afterwards Chuck was to give details of what had happened near the Statue of Liberty. In The Vision for Now! (* 20th May 2011), he writes,

Suddenly, the Lord gave me a  vision of our nation.  He took me three years into the future and began to let me hear and see what our future would look like…and the two iniquitous spirits that would try to capture my children and children’s children.

Next, He showed me that within three years (by May 31, 2011), a statement would be made regarding Israel in this nation that would realign the nation and determine the future of this land.  (With President Obama’s speech yesterday endorsing the Palestinians’ demand for their own state based on borders that existed before the 1967 Middle East war, this has now happened.  I believe this statement will create a split in the United States for the next three years as individual states make choices on how they will align.) The Lord then revealed His remnant in this nation, which states had covenant roots…(continued here).

Would my American readers please correct me if I’m mistaken here: in keeping tabs on  your news from ‘over the pond’ it would seem a gaping chasm has opened up across your nation.  So it seems Chuck Pierce correctly prophesied on that score…

Monday’s newsletter from Israel Hayom reports America will intervene with own peace plan by January if peace talks fail. After meeting with senior Palestinian and American officials, Meretz Chairwoman MK Zehava Gal-On released a statement on Monday that the Americans are “moving from a coordination phase between the two sides to an intervention phase.”  She reveals that the new plan, expected to be presented in Jan 2014, will follow the “Clinton parameters” and will address all the core issues, and will be “based on the ’67 lines with agreed land swaps”.  Also, that President Obama will continue to pressure Ramallah and Jerusalem to reach a breakthrough in negotiations by the second quarter of 2014. Thus, the US is moving from coordination to intervention without any more interim agreements.

John McTernan, posted and commented upon the above for his readers, ‘to see the link between Obama pressuring Israel to divide the land and the disintegration of his presidency. He is on a collision course with the Lord over Israel and Jerusalem. Obama shows no signs of backing down over dividing Israel; therefore, severe judgment is now coming at him from all angles. One scandal may erupt and destroy him as president…’  (continued here).

So Chuck Pierce was correct on that one too; whichever person was to become President has indeed turned the US from support of Israel towards the Palestinians.  And there are also deepening issues over POTUS’ personal support of the Muslim Brotherhood, which leading Egyptian press reports as being entrenched across USA (see Raymond Ibrahim’s Exposed: names and identities of MB operatives in US).

In view of the collapse of American influence throughout the Middle-East and Russian ascendency, alongside deep internal divisions, America’s ‘exceptionalist’ stature has rapidly declined into the mediocre. Furthermore, only last week Forbes magazine rated  Vladimir Putin as ‘The Most Powerful Man In The World’, usurping Obama’s position!!

Today I received Chuck Missler’s weekly eNews with his unsettling report on America’s location on the ‘Cycle of Nations’. Here’s your starter;

…we are leaving dependence and are on the brink of bondage; so many people are sound asleep and totally oblivious of the catastrophe lurking on the horizon. They are deceived, blinded and being hurtled into a global government with no rights available to anyone not belonging to the elite. On New Year’s Eve 2011, our Bill of Rights was essentially nullified with a Presidential order. Barely a ripple was noted among the people…

I’d urge my American readers to consider the above-linked articles.

Back to the beginning: The critic mentioned above has implied it’s no longer the Lord’s will to draw people to Himself and save them, as happened in 1904-5!  Emphatically he states, ‘God is NOT going to move in a new way..’.  In truth, he curses and not blesses Wales. Ultimately, time will prove whether the American or Welshman is accurate.

Having occasionally transcribed prophetical material myself I notice this critic’s analysis is inaccurate. It’s no use quoting scripture without knowing and moving under the Holy Spirit oneself. Ranting about apostasy, deception and error in Wales is failure to love, as Jesus commanded! (Such drove me away from Christ and into the occult, as here.)

This stance not only grieves the Holy Spirit but, in attributing what may be His work to that of Satan, also runs the grave risk of committing the unpardonable sin. It’s wiser to disagree lovingly than declare something is of the devil, and thereby serve the Accuser of the Brethren, is it not?

For the scriptural support to my complaint, read Jesus’ rebuke of the Pharisees when they claimed His work was empowered by Beelzebub, or Satan, at Matthew 12:25-31 (context here).  A helpful explanation may be read at Christian Answers.

Lastly, the critic condemns several people whom I know to be humble servants of the Lord. His claims of their using Kundalini power are most questionable. Having practised yoga and been delivered from that spirit I would have discerned its presence whenever I several times witnessed Holy Spirit working through those men of God.

Furthermore, had it not been for one of them stopping his sermon because He sensed the Lord wanting to heal, then I’d still be a 24/7 carer of my dear wife 7 years later!  So praise you Lord that Nina is no longer officially registered as permanently disabled – read her documented account of how Jesus healed her broken spine.