Upon waking early I gave my full blogging day to the Lord. Many possible items have got delayed and not started – but sometimes the Lord ‘coincidentally’ interrupts, as yesterday to reveal a ‘trilogy’ upon what I’d been musing (See GPS#88). With such ‘divine endorsement’, I was contemplating posting more examples of ‘two witnesses’ principle, but on a couple of highly contentious topics – ones about which I had been ridiculed, slandered and given the badge of honour of being ‘dangerous’! (That is, ‘on target’.)  Updates on those issues had turned up like pieces in the Lord’s invisible jigsaw puzzle.

After such brief thoughts I checked today’s verse, shown above. Quite appropriate, so I thought, but then upon opening for the full chapter and changing to my preferred NKJV guess what I spotted – ANOTHER confirmation about ‘witness’, viz: 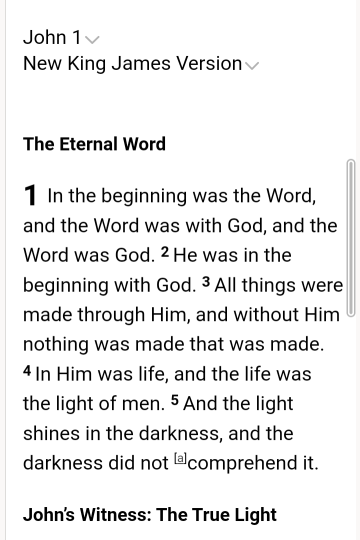 NB: had I gone straight into the automatic NIV link it gives a different sub-head: ‘John the Baptist denies being the Messiah’ !! and I wouldn’t have noticed!!

Now let’s remind ourselves of Deuteronomy 19 on how to validate of any matter. 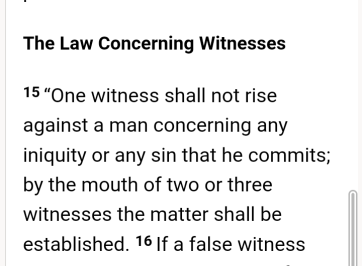 So nearly 2,000 years ago by the river Jordan stood TWO witnesses: John the Baptist and his cousin Jesus. And FROM heaven were another TWO witnesses:  the ‘dove’ of the Holy Spirit landing upon Jesus PLUS God the Father’s voice as  John baptised him in the water. (John 1:29-34, Luke 3:21-22 BibleGateway) That is, four persons, which is one more than ordained for establishing the facts of the matter.

So after breakfast I checked further and in my Bible found a most relevant Word Study on John 1:5 ‘comprehend’ [note ‘a’ – or overcome] says ‘darkness is unreceptive and does not understand it’ – similar to what I’ve encountered. 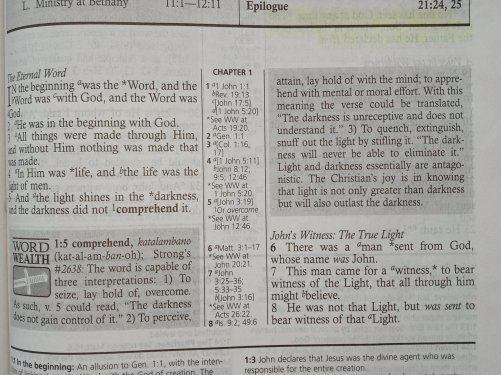