The Word of the Lord given on 7th and 8th February to Amanda Grace brings, as usual, intriguing promises on international politics. Be sure to read it in full via that link as I’m citing the parts on Canada only (underscoring and bold text mine). Speaking to Steve Schultz on Tuesday, Amanda begins her recitation:

“Praise be To the Lord God El Shaddai, who rules in righteousness, who is long-suffering, whose name is above all names, and to His Kingdom, there is no end. And the Spirit of the Lord says this day My Children there is much percolating happening on the earth, a furious boil has begun in areas of the world and that boil Has approached the point of BOILING OVER says the Lord of Hosts….

…OH CANADA OH CANADA I THE LORD GOD AM WITH YOU, the wicked leaders of your land are not fighting you but fighting Me and MY PLAN, they are attempting to drain and lynch and blockade the people coming together in one accord, what can be withheld from them says the Lord of Hosts.

A VERY SUDDEN AND SHARP PLUMMET within the leadership of Canada shall echo freedom across the Land. Oh, Canada Cry out to Me March forward, put on the whole armor of God, and STAND for the dawn breaking forth of your salvation is at hand…

…In this hour there shall be a squeeze and a sudden release as I am letting the air out of Trudeau’s balloon as well says the Lord of Hosts….”

In presenting and discussing this on Tuesday on Elijah Streams with Steve Schultz, he comments at 25:11 mark and then Amanda replies (from auto-transcript):

“May I make a comment on this: there are people out there believers, Christians, patriots who are saying you know those truckers are causing a lot of trouble they’re breaking the laws,they’re blocking the city of in Ottawa, the capitol, and they’re saying ‘Why don’t they just stop causing trouble?”…but God’s saying you truckers and all the rest of you standing by stand don’t move stand because they’re not they’re not coming against you they’re coming against me am i saying that right?”

“Yes because they, the leadership of Canada has more and more tried to oppress the people of Canada and and use what’s going on as a way to put them in chains and what they’re doing the more they do it, they’re fighting God they’re not fighting the people on this. So they get closer and closer to the cliff of their demise!

… yeah wow okay. It’s like pharaoh okay and this is coming to me right now and i perceive this to be the lord when the Jews were getting freed from Egypt pharaoh made the mistake of being drawn out to try to clamp them back down. He made the mistake and he went out trying to re-clamp down and put down this revolution in a way that was happening this miracle and what happened was pharaoh lost his whole army instead. So they’re trying to put something down. He’s coming back out trying to with more fierceness this time Trudeau put this down and it’s going to backfire on him!
Yes Lord, wow that’s an okay wonderful word well praise the Lord…”

AT 36:40 on the above final point Amanda brings an amusing take:

That description is apposite for the outrage Trudeau caused the next day, Wednesday, in Parliament with his exceptionally offensive insult to one of the opposition party. Three times he was asked to apologise but refused and walked away – https://www.foxnews.com/world/canada-house-commons-erupts-after-trudeau-accuses-first-jewish-woman-mp-supporting-swastikas: 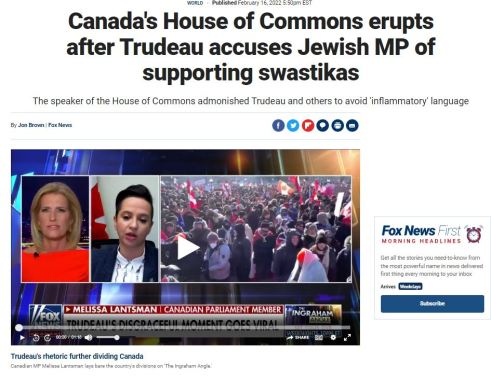