Wednesday 19th May I was invited to an open zoom meeting with Catch The Fire Farnborough and the leader’s wife Rachel explained they wanted attendees to break into prayer-rooms for a specific purpose connected to Sunday’s Message brought in Toronto. She shared her own insight of recent years that the Lord Jesus is returning to the earth in the very near future. This is similar to what I witnessed of how Holy Spirit had come upon Nina a year or so ago during worship at our church near Haslemere. She was impressed to announce that Jesus is coming back much sooner that we expect!

Rachel told us about the massive impact that Message had made in bringing the reality of that vital part of Bible prophecy into sharp, personal focus. She didn’t give all the details so I asked if it’s connected to the scriptural Rapture of Christians, as in Paul’s two letters to the church in Thessalonika, Greece. I understood the speaker means it’s not the same as that but refers to a massive outpouring of God’s Presence to enable a worldwide revival others refer to as The Billion Souls Harvest prior to the full outworking of the End-times foretold in great detail in the Book of Revelation. (Similar to Smith-Wigglesworth’s vision of Britain in total revival – this post refers.)

In our prayer-room I immediately heard “John 17.1” and thus read Jesus’ prayer therein. It comes in three parts where Jesus prays for Himself, for His contemporary disciples and for all believers – that’s you and me! I got drawn to the references to glory and sensed the first part also applies today, and thus to what’s about to happen. Therefore, I prayed those parts aloud:

“Father, the hour has come. Glorify Your Son, that Your Son also may glorify You,2 as You have given Him authority over all flesh, that He should give eternal life to as many as You have given Him.3 And this is eternal life, that they may know You, the only true God, and Jesus Christ whom You have sent.4 I have glorified You on the earth. I have finished the work which You have given Me to do.5 And now, O Father, glorify Me together with Yourself, with the glory which I had with You before the world was…

20 “I do not pray for these alone, but also for those who will believe in Me through their word; 21 that they all may be one, as You, Father, are in Me, and I in You; that they also may be one in Us, that the world may believe that You sent Me. 22 And the glory which You gave Me I have given them, that they may be one just as We are one…

24 “Father, I desire that they also whom You gave Me may be with Me where I am, that they may behold My glory which You have given Me; for You loved Me before the foundation of the world…”

Afterwards, Rachel mentioned that the manifestation of that Message is part of the vision of fire that her prophetic husband and I had (nearly 30 years previously, as told herein).

NOW, let’s consider that significant Sunday Message – I hope you’ll be able to set aside  time to watch, listen carefully and assimilate what Lillian Brown brings whilst trembling under the Lord’s tangible touch:

In the opening minutes Lillian tells of the Lord expanding over a period of two days upon just two words He’d dropped into her mind, “Brace yourself!” 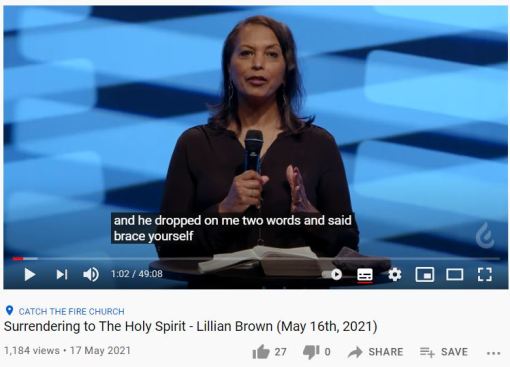 MY attention was strongly grabbed when she then spoke on Moses’ journey up Mount Sinai to be alone with the Almighty and encounter His Glory because I’d blogged about that some months ago in connection with Donald Trump’s period officially out-of-office as a Mt Sinai Sojourn – AND that writing was validated by several ‘God-incidents’!

” 16 For the Lord Himself will descend from heaven with a shout, with the voice of an archangel, and with the trumpet of God. And the dead in Christ will rise first. 17 Then we who are alive and remain shall be caught up together with them in the clouds to meet the Lord in the air. And thus we shall always be with the Lord.” (1 Thessalonians 4 NKJV)

The full message Lillian wanted to deliver got abandoned as the Lord began speaking to her directly as she recited the scriptures describing Jesus’ return and visions of God’s Throne Room in Heaven: 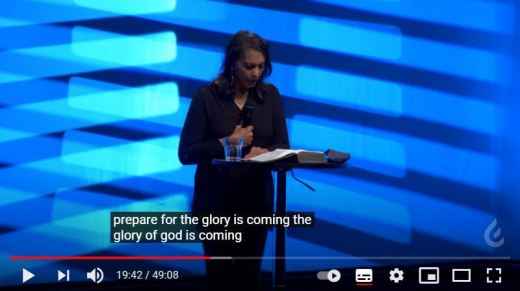 Next, the Lord through Lillian then drew attention to the immense importance of what I’d been getting increasingly strong nudges to focus upon, as in this morning’s post Back to Blog’s Basics… (I note it begins at 22 minutes – my birthday number!):

As an example of what this will look like, Lillian said she’s reading Scotland Ablaze and referred to the revival that started in the Hebrides – and I recalled this arose in answer to prayers by started by, among others, Donald Trump’s great aunts, as reported on BBC’s ‘Tongs of Praise’ of 11.1.2017 (Is Donald Trump God’s Man For This Time?… refers).

Rachel’s husband Christopher quotes John Arnott, pastor at Toronto Airport from where the Holy Spirit Outpouring began in 1994 and went global, as often saying the Lord has told him, “You’ve not seen anything yet!”  And this promise is completely scriptural for although Apostle Peter referred to the prophecy in Joel, it actually speaks of world-wide revival not just what was happening in Jerusalem nearly two thousand years ago:

Furthermore, all this was only the first confirmation of those ‘nudges’ to change my prime area of focus towards Jesus’ return…and such a spectacular one is next.is next...!

4 thoughts on “Holy Spirit says, “Brace yourself! Get ready for Jesus’ soon Return””