The day after Joe Biden’s inauguration I referred to Kim Clement’s ‘Two Presidents’ prophecy of April 2008, and which implies there would be a ‘double-mindedness,’ when asking Can dis-United States of America be a Trustworthy Ally and Keep its Place as a Global Leader?  Subsequently, I posted two updates regarding Iran (here and here).

I regret to report there’s now further proof of that once great nation and leader of the Western world falling into international contempt – and without any reference to Biden’s policies being the biggest threat to Ireland’s prosperity as it falls out with the EU!!! 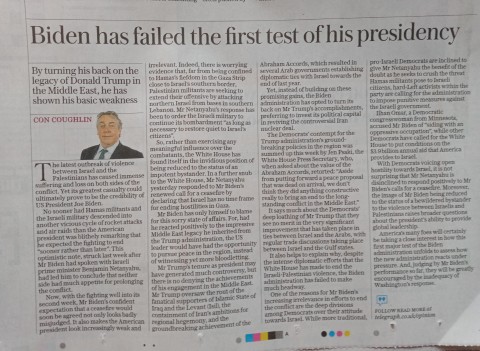 ‘…So, rather than exercising any meaningful influence over the combatants, the White House has found itself in the invidious position of being reduced to the status of an impotent bystander. In a further snub to the White House, Mr Netanyahu yesterday responded to Mr Biden’s renewed call for a ceasefire by declaring that Israel has no timeframe for ending hostilities in Gaza.

‘Mr Biden has only himself to blame for this sorry state of affairs. For, had he reacted positively to the impressive Middle East legacy he inherited from the Trump administration, the US leader would have had the opportunity of pursuing peace in the region, instead of witnessing yet more blood-letting.

‘Mr Trump’s tenure as president may have generated much controversy, but there is no denying the achievements of his engagement in the Middle East. Mr Trump oversaw the rout of the fanatical supporters of Islamic State of Iraq and the Levant (Isil), the containment of Iran’s ambitions for regional hegemony, and the groundbreaking achievement of the Abraham Accords, which resulted in several Arab governments establishing diplomatic ties with Israel towards the end of last year.

‘Yet, instead of building on these promising gains, the Biden administration has opted to turn its back on Mr Trump’s accomplishments, preferring to invest its political capital in reviving the controversial Iran nuclear deal.

‘The Democrats’ contempt for the Trump administration’s ground-breaking policies in the region was summed up this week by White House Press Secretary Jen Psaki who, when asked about the value of the Abraham Accords, retorted, “Aside from putting forward a peace proposal that was dead on arrival, we don’t think they did anything constructive really to bring an end to the longstanding conflict in the Middle East.”

THUS, Israel’s Prime Minister Netanyahu is absolutely right to ignore the ignominious American administration – Sadly, the USA has clearly become schizophrenic and utterly unreliable as an ally of Israel under ‘China Joe’!! 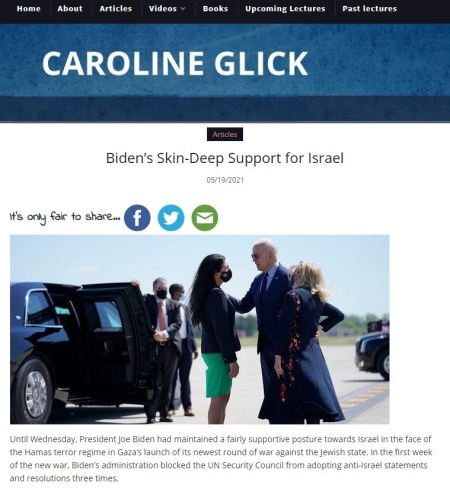 ‘…But Biden’s week of professions of support for Israel were hardly the last word on his administration’s positions on Israel and the war. Indeed, they weren’t even its first word.

‘First, there are the policies that Biden had already adopted before Hamas opened its missile offensive from Gaza and its spate of organized anti-Jewish pogroms in mixed Arab-Jewish cities throughout Israel.

‘Biden’s courtship of Iran through the renewal of nuclear talks in Vienna, in which he has signaled his willingness to end U.S. economic sanctions on Iran; and through his administration’s persuasion of Iraq and South Korea to unfreeze billions of dollars in Iranian oil revenue have signaled Iran and its terror proxies including Hamas that the Biden administration is abandoning the U.S. alliance with Israel and the moderate Sunni states in favor of Iran and its proxies.

‘Likewise, Biden’s announcement that he is restoring U.S. funding to UNRWA and the Palestinian Authority despite their funding of terrorism were a tailwind for Iran and Hamas plans to attack Israel. With U.S. funding and sanctions relief, not only did they realize that the U.S. had their back, (but also) Iran and Hamas gained the economic wherewithal to wage war. So too, Hamas was able to use America’s abandonment of Israel as a means to persuade Israeli Arabs that they could safely participate in pogroms against their Jewish neighbors and accept Hamas as their representative.

‘The second indication of Biden’s actual policies were the people he appointed to positions responsible for managing U.S. ties with Israel in his National Security Council, at the State Department, the Defense Department and the U.S. intelligence agencies. Most of the people that Biden has appointed to these key positions have public records of hostility towards Israel. For instance, Deputy Assistant Secretary for Israeli and Palestinian Affairs Hady Amr was an anti-Israel activist until his appointment. Amr has a long record of statements hostile to Israel and supportive of Palestinian terrorists, including Hamas. When supposedly moderate Secretary of State Anthony Blinken decided to send an envoy to the region, it was Amr that he dispatched last week. Appointments like Amr, and Undersecretary of Defense for Policy Colin Kahl are the sort of appointments that one would expect from an anti-Israel president, not from a pro-Israel president.

‘Finally, there is the political climate in Biden’s Democrat Party. From the moment Hamas launched its current offensive against Israel, radical Democrat lawmakers in Congress have escalated their anti-Israel rhetoric and actions to unprecedented levels. On Monday, Congresswomen Rashida Tlaib, Alexandria Ocasio-Cortez, Cori Bush and others adopted rank anti-Semitic language against Israel referring to Israel as an “Apartheid” state and insisting that Israel is not a democracy because “Apartheid states aren’t democracies.” The State Department itself has determined that accusing Israel of being an “Apartheid” state is an anti-Semitic act…’

ISRAEL IS NOT ALONE  – THERE’S SAUDI ARABIA TOO – AND USA ITSELF!

Caroline incisively spells it out in another of several earlier articles – and is scathing about the schizoid effect of Biden in dis-uniting America internally! 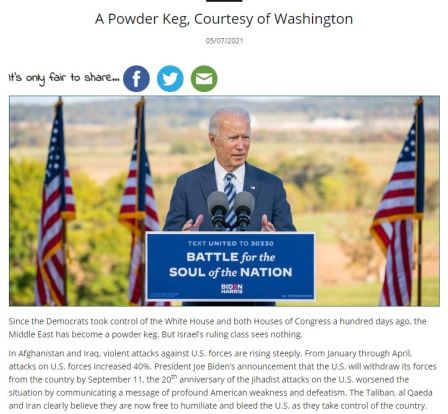 ‘Since the Democrats took control of the White House and both Houses of Congress a hundred days ago, the Middle East has become a powder keg. But Israel’s ruling class sees nothing…

‘Just months ago, hope abounded that Saudi Arabia would join the UAE, Bahrain, Morocco and Sudan in the Abraham peace accords with Israel. But the picture is now reversed. Recognizing the U.S. has changed sides, the Saudis no longer believe that with Israel they can contain Iran. So now they are hoping to cut a deal with the ayatollahs…

‘While the Biden administration has yet to focus on the Palestinians, its statements and appointments have empowered Fatah and Hamas to launch a new campaign against Israel…

‘Identity politics hold that the U.S. was born in sin and systemically racist. To cleanse its soul, America must adopt a two-tier system of governance in which members of recognized “victim” groups are given extraordinary rights and members of recognized “oppressor” groups must be punished. And just as America is morally infirm and must mend its evil ways, so its allies –particularly Israel – must be similarly punished and forced to transform itself.

‘Biden gave voice to this position in his speech before Congress this week. There he presented a portrait of the U.S. as an inherently racist state….To understand what Biden was referring to we can look to New York State, where the Democrat-controlled government passed a bail reform law in 2019. The new law effectively gave tens of thousands of violent criminals a get-out-of-jail-free card by making it extremely difficult for judges…The consequence of the reform has been a massive increase in violent crimes statewide.

‘Thanks to Democrat control over the White House and both houses of Congress, soon the entire country will have the two-tiered justice system now in place in New York, where favored groups are protected and disfavored groups are left to fend for themselves...’

Q.E.D. > Qod erat demonstrandum = ‘what was to be shown’ is now shown; namely that my interpretation of the ‘Two Presidents’ prophecy is demonstrated as being correct.

PS. Joseph Canning comments on my Fbk timeline entry for this post:

“Two presidents… did you know the moment of the fraud’s fake inauguration was actually 10 mins early (11:50) and the previous term doesn’t officially end until 12:00 – so there was another fulfillment there too.”