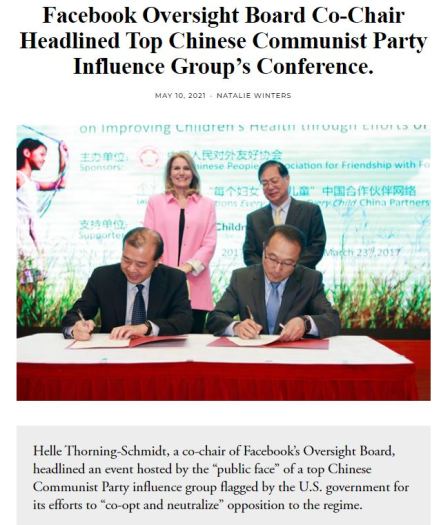 ‘The United Front functions as China’s premier influence and propaganda organization, raising flags with the U.S. government’s Economic and Security Review Commission. It seeks to “co-opt and neutralize sources of potential opposition to the policies and authority of its ruling Chinese Communist Party” and coerce American leaders “to take actions or adopt positions supportive of Beijing’s preferred policies.”

‘Schmidt headlined an event hosted by the Chinese People’s Association for Friendship with Foreign Countries (CPAFFC), which is led by the daughter of a former Chinese Communist Party paramount leader, regarded as the “public face” of the United Front, and functions as “avowedly an arm of the party-state.” What’s more, the U.S. State Department has described the group as seeking to “directly and malignly influence” U.S. state and local leaders…’ [continue reading here]

1 thought on “Exposure of rot continues: yet more on Farcebook and CCP influence!”