REALLY do need to update my catalogue of Fulfilled Prophecies as there’s now lots more than 250 examples of prophecies that have come to pass, or are the process of becoming fulfilled – OR like this one as around 40th instance of my musing nearly 5 years ago “Is the Lord exposing rotten politics? UK, USA – next EU?”

Now let’s re-consider the content of a couple of recent postings and something even more intriguing:

The last couple of posts on “OOPS”, the Biden Show… revealed video evidence of the BIG LIE. Standing atop of a building close by the White House, 1600 Pennsylvania Avenue in Washington, District of Columbia, journalist Richard Citizen filmed a TV showing news broadcast claiming to be ‘LIVE’ from the White House Rose Garden BUT there were NO people or media vans outside the building and NO security presence whatsoever!

Later Dianne Marshall reports – with photographic evidence – the actual location has been found as being the Tyler Perry studios close by former Turner Stadium in Atlanta, Georgia. That stadiums buildings can be seen from the pretend rose garden!!

In fact this reminds me that, immediately after Joe Biden’s ‘inauguration,’ The Marshall Report was most suspicious about the ‘oval office’ wherein he urgently signed dozens of Executive Orders, as reported with photographs in Lights, Camera, Action ! It’s Joe Time! In showing many photos for comparison, Dianne raises a number of questions,

“There has to be some clues in these photos. Aside from Joe looking like a mannequin in a clothing store, I notice there are no military flags and no sign of the famous Space Force Guardians. Which would be any CEO’s pride and joy to be commander of all. And there are some weird things in the windows. Different than the bushes and grounds of the oval office. I haven’t studied this yet, but later I will do some deeper digging.”

A couple of days later in USA Inc Bankrupt. No More IRS – Where’s POTUS? she looks again very closely at that stage set and notices a figure outside that oval office…and remember this is after Biden’s inauguration.

Soon after stating, “I trust the research of those who discovered these official documents, and each can reason for themselves. Each person can and should do their own research. With a liar fake news, and a corrupt congressional body as a whole, We The People are left to do our own research and draw our own reasonable assumptions…”  Dianne examines this photo and ‘on-cue’ asks, 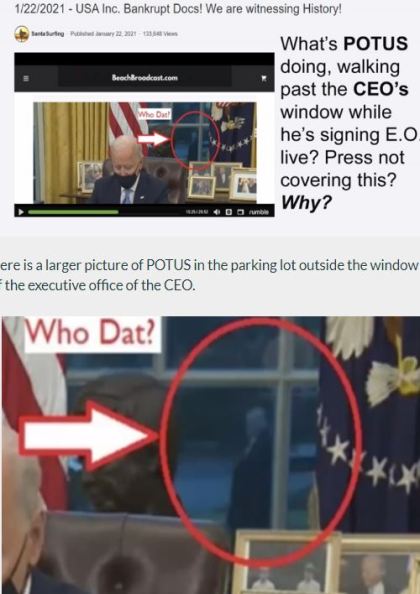 “Now one would think that with all the press in the Oval Office they would have noticed POTUS walking past the window? They would have been all over this, ripping Trump apart to creating outrageous motives for him being on the White House grounds. They would have spinned some tale of Trump disrupting the newly appointed CEO and pushed out something absurd to secure the Pelosi/Schumer impeachment. But they did not. Why is that? And where is the information on why there is now a parking lot in the front of the oval office?

“More interesting is why the national guards stationed at the event, did not hear any songs, music, speeches, or see any of the pomp we are told took place on the day of the inaugural event in D.C.? And why did no Marines salute the new CEO in the film of him entering the White House? We know the CEO did not salute, but he did say to salute the officers. Why did the CEO have to charter his own private plane to his inaugural? If it all looks strange, it is because it is strange.

“The entire coverage is full of clues. This is a live board-game of Clue! Who did it and where? Enjoy the show and now that you know what to look for… start looking!”