In considering this fulfillment of a couple of prophecies I’d point to a reminder, as in the 15th April posting of a report made a few days after December’s General Election, and asked Is Massive Catch of Fish in English Channel a Prophetic Sign? In view of events I added:

‘Now my reply was dated 7th April and the next day Neil Thomson asked at the foot of Veronika West’s vision of an angel at No.10 Downing St about the ‘short time’ in office that she’d prophesied for Boris Johnson after winning the general election. I got a prompt response and shared my own thoughts on the matter, which I hope to blog on soon. Veronika had been reminded of this only the previous day, , 7th April, upon seeing the Daily Mirror headline shown here >>>

‘So it would seem that ‘Valerie’ makes a very valid point about the significance of four months December 2019 to April 2020!  Therefore, in my opinion, this massive catch of fish does signify an approaching massive catch of souls! How say you?’

This weekend saw the publication of the Prime Minister’s near-death from this virus: 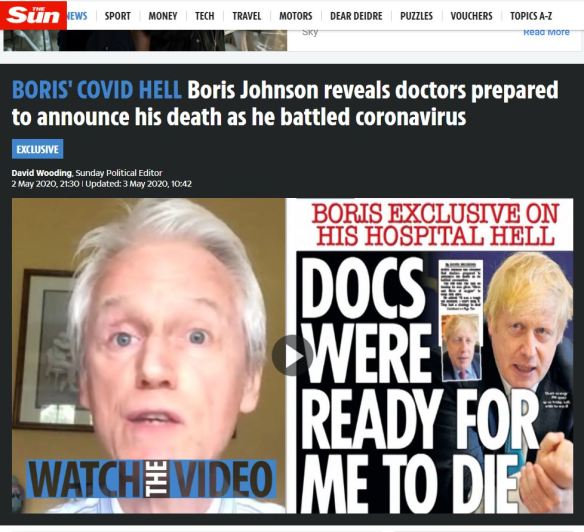 Click image for link to read article in full

‘The PM told The Sun on Sunday he was given “litres and litres of oxygen” to keep him alive. He added: “It was a tough old moment, I won’t deny it. They had a strategy to deal with a ‘death of Stalin’-type scenario.

“I was not in particularly brilliant shape and I was aware there were contingency plans in place. The doctors had all sorts of arrangements for what to do if things went badly wrong. They gave me a face mask so I got litres and litres of oxygen and for a long time I had that and the little nose jobbie.”

‘The stark reality of his plight quickly struck home when he was wired up to monitors and moved into intensive care.

‘He told how “the bloody indicators kept going in the wrong direction” and he realised there was no cure for Covid-19.

‘During his life-or-death struggle at St Thomas’ Hospital last month, Boris kept asking himself: “How am I going to get out of this?”….’

The relevant prophetical passages are as follows (click titles to read in full):

“…I believe we will see PM Boris Johnson STAND IN A GENERAL ELECTION and the very fragile chair that he first sat upon will BE REPLACED BY THE CHAIR OF WINSTON CHURCHILL.

“I believe He will sit upon this CHAIR, “THE CHAIR OF CHURCHILL” FOR A SHORT TIME AS HE SERVES OUR NATION UNDER THE WATCHFUL EYE AND FAVOURABLE HAND OF THE KING OF HEAVEN AND HER MAJESTY THE QUEEN OF ENGLAND…”

“…You see, it was easy for Elijah to defeat all these false prophets – they were merely puppets of Jezebel. But it was the onslaught that followed after from Jezebel herself he could not cope with. Boris will win the election, but after the election, his opposition will go after him in a major way. It is absolutely crucial that we pray for him. I believe Boris will be in hiding for a season as we exit from the European Union. During this time, he will handpick a man with a double-portion anointing, who will be an Elisha to Boris. He will pick up Boris’s mantle and run with it, and Boris will resign….”

We thank the Lord that the PM has safely come through this storm and trust he will now be seeking the Lord and in a better place to fulfill His destiny for Great Britain. (Vision of an Angelic Messenger sent by the Lord to Number 10 refers.)