Almost three weeks ago I received an unusual report from Devon and eventually was able to acknowledge and thank ‘Valerie’, asking permission to publish in due course if the time should become available. Over Holy Weekend I realised it’s a suitable follow-up to the scheduled posts on the miraculous catch of 153 fish by Jesus’ disciples. (If you’ve not yet read them, please do so as soon as you’re able).

‘Valerie’ writes on 27th March and encourages us to weigh and pray about this (note, emphases are mine):

‘Your site has taken me up higher and in deeper with the Lord. My husband and I are in a Local HOP (inspired by Ffald-y-Brenin) and members at an Anglican church. We would not say we have the gift of prophecy as such, but believe we have witnessed a prophetic sign. The story below has been submitted to FYB and to local church leaders. This morning, I felt the Spirit prompt me to send it on to you also. The text below was dated 18th December 2019. [RB: note, almost 4 months ago.]

‘Three weeks ago, we were watching the BBC TV news report (on Spotlight SW) about the record-breaking haul of fish at Brixham, Devon. As we watched it, we both experienced the presence of the Holy Spirit upon us and sensed deep within that this was the Lord speaking a word of encouragement to the local churches and to the nation.

‘The skipper being interviewed was Adam Cowan-Dickie, father of Luke Cowan-Dickie who plays rugby for Exeter Chiefs and for England. In the 3rd week of November (2019) his trawler, Margaret of Ladram, had four consecutive days of their nets completely full of fish. The unusual thing is they were all Dover Soles on all four days. Yes, they were all soles / ‘souls’. Apparently, this would be exceptional if it happened on just one day, as Dover Sole usually make up around 17% of any one catch. It was an historic, record breaking event for the port of Brixham and the catch was very valuable indeed – worth £126,000.

‘The same week I met a chap who knew a lot about fishing and I mentioned the story to him. He told me about this species of fish. He said they lie flat on the seabed in the silt and mud and they prefer darkness to light which is why they are more active at night. To catch them, they need to be raised up out of their murky habitat by the trawl nets. He agreed it was a miraculous event.

‘Apparently, the skipper had been waiting for the opportunity to fish in those beds for a little while, hoping no-one would come in and snatch away all the soles, but he had no idea when he put down the nets that they would be filled right up – and 4 days in a row! I wondered about the number 4 (4 months /years? 4 nations of the UK? 4 days before Lazarus was raised?) but have no clarity on that.

‘Our impression is that a Kingdom harvest is ready and waiting to be brought in.

‘I leave this with you to test and weigh up before the Lord (and) acknowledge it is not quite the usual style of prophecy on your site!’ 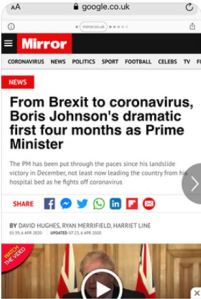 Now my reply was dated 7th April and the next day Neil Thomson asked at the foot of Veronika West’s vision of an angel at No.10 Downing St about the ‘short time’ in office that she’d prophesied for Boris Johnson after winning the general election. I got a prompt response and shared my own thoughts on the matter, which I hope to blog on soon. Veronika had been reminded of this only the previous day, 7th April, upon seeing the Daily Mirror headline shown here >>>

So it would seem that ‘Valerie’ makes a very valid point about the significance of four months December 2019 to April 2020!  Therefore, in my opinion, this massive catch of fish does signify an approaching massive catch of souls! How say you?

5 thoughts on “Is massive catch of fish 4 months ago in the English Channel a prophetic sign?”