His disciples came to Jesus and said, “Why do You speak to them in parables?” and He replied, “Because it has been given to you to know the mysteries of the kingdom of heaven, but to them it has not been given. For whoever has, to him (and her) more will be given, and he will have abundance; but whoever does not have, even what he has will be taken away from him. Therefore, I speak to them in parables, because seeing they do not see, and hearing they do not hear, nor do they understand…” (Matthew 13:10-13 NKJV)

Definition: ‘Mystery’, Greek musterion (moos-tay-ree-on; Strongs #3466). From mueo, “to initiate into the mysteries”, hence a secret known only to the initiated, something hidden requiring special revelation. In the NT the word denotes something that people could never know by their own understanding and that demands a revelation from God. The secret thoughts, plans and dispensations of God remain hidden from unregenerate mankind, but are revealed to all believers. In non-biblical Greek musterion is knowledge withheld, concealed or silenced. In biblical Greek it is truth revealed (Col 1:26). NT musterion focuses upon Christ’s sinless life, atoning death, powerful resurrection and dynamic ascension.’ [New Spirit-Filled Study Bible]

Prophecy: “2018: I will impart to My Prophets the ability to see clearly My Numbers…” (delivered by Leisa Ebere, read in full here).

The above, ancient meaning of ‘mystery’ is rarely understood and appreciated, even by those solidly grounded in scripture. As told in my testimony, my pre-Christian life got immersed in that esoteric knowledge, and so I’m experienced in this matter and can attest that the difference between that discipline and holy revelations from the Almighty is like the contrast between His Light and the devil’s darkness.

Roger Penrose, “The Road to Reality: A Complete Guide to the Laws of the Universe”, Knopf (2005)

Therefore, the modern definition of ‘mystery’ as an unsolved puzzle, or something difficult or impossible to explain is comparatively trite!

Even the eminent mathematician-physicist Sir Roger Penrose tends toward a circumscribed perception of reality when using this term, as quoted and discussed in RTU’s Three Worlds, Three Mysteries.

According to its author Joseph, Penrose posits the existence of three “realms” existing around us and “which brings three mysteries” that raise interesting questions on how the world should be viewed. These realms are the physical, mental and Platonic mathematical worlds:

Of course, such hypothetical mysteries cannot equal the much deeper ‘mystery’ of revelatory scripture! Yet in positing that mathematical entities don’t belong in space or time and are eternal and unchanging, Penrose is approaching our understanding of the mathematical aspects of the Bible. His recent thoughts upon consciousness originating at a quantum level may approach ideas I’ve broached in the convergence of science and scripture.

Continuing from Part 1 on Apostle John’s account of the miraculous provision of 153 large fish and the re-blog of New Zealander Joanne Rolston’s posts on it, we learn that she asked Jesus direct on why such specific details are noted. Let me quote some pertinent parts of her highly personal account:

“I asked the Lord about the meaning of the 153 fish in John 21:10, and I was given a maths answer. Amazingly I grasped the explanation. Having to learn statistics in order to get my Diploma of Business helped. I had to overcome a lot to learn the math behind statistics…(including) my loathing for maths. Fortunately, I have a very patient husband who helped me with the mechanics of maths in statistics.

“But I kept complaining to God. “Why do I have to learn this?” I protested, “We’re never going to use it in our business!”

“Make friends with maths” the Lord told me. Not reconcile myself to maths, not become acquainted with maths; He wanted me to believe I could learn maths and take an interest in it! It was a big ask. In a Father’s instruction, He says;

“Wisdom is the principal thing; Therefore get wisdom. And in all your getting, get understanding.” (Proverbs 4:7) 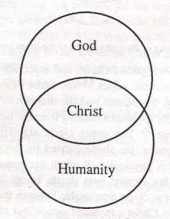 So we read that Joanne progressed and mentions Factorial numbers and Venn diagrams as being the first things she learned in statistics. These were the basis of all the wonderful things she was later shown about that ‘action replay’ fishing trip by seven of Jesus’ disciples.

She succinctly explains the unusual significance of the 153 fish by maths of factorials and square root of the third prime number (3), as well as geometrical constructions and proofs in diagrammatic forms, PLUS their relevance to the triune relationship of God, Christ and mankind.

Now examine these facts more closely and delve deeper into the ‘mysteries of the kingdom’:

That historic catch’s mathematical meaning is a surprising shock to we moderns but, in the immense sweep of history, such intellectual knowledge was a relatively ‘recent’ development to those living in the inter-Testamental times of the Graeco-Roman world. The principal propositions, or theories and proofs, of geometry had been compiled by Euclid of Alexandria about 300 years before Jesus’ life. To give us some perspective, this is the same period since the accession of George I (1714) and the appearance of John and Charles Wesley to lead a major evangelical revival, from which was born the fourth largest church denomination in England, Methodism (in Oxford, 1729).

Fascinating Fact: the first proposition of Euclid’s Elements of Geometry is to construct an equilateral (three sides of equal length) triangle by describing a Vesica Piscis (known as ‘Vessel of Fish’!) with a pair of compasses. It’s done by drawing one circle and then a second one exactly the same size, but with its centre on the circumference of the first. 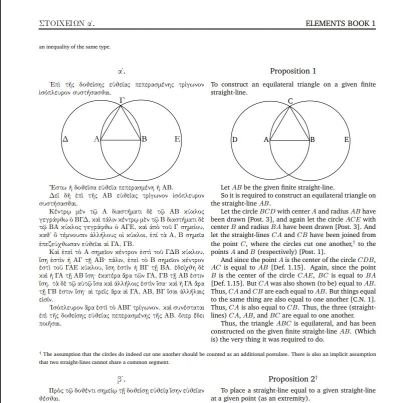 The common, overlapping area looks like a canoe and the ratio of its length to width is 265:153, which closely approximates the square root of 3 as calculated by Archimedes of Syracuse.

All three symbols, triangle and circles with intersecting segment, feature in the ‘mystery’ of the 153 fish – note the use of equilateral triangle as this will be considered another time:

It’s noteworthy that John closes his Gospel account of Jesus’ main post-Resurrection appearances with this most tantalising morsel:

‘And truly Jesus did many other signs in the presence of His disciples, which are not written in this book; but these are written that you may believe that Jesus is the Christ, the Son of God, and that believing you may have life in His name.’ (John 20:30)

That statement lodged indelibly within my soul when a teenager and I determined to set on a quest to discover the fullness of Jesus’ work. A lifetime later, I learn that ‘seal’ sets the scene for the last chapter’s account of the amazing fishing expedition. That is, it is a clear signpost of the next and final miracle’s deep significance to the early Church.

Jonathan R Hill, whose above-titled book explains how ‘pi’, the mathematical ratio of circumference and diameter of every circle is found in Genesis 1:1, and that of ‘e‘ (base of natural logarithmic and base rate of growth in all growing processes), are found in John 1:1, devotes a full chapter to ‘Sign 8’, the miraculous catch of 153 fish.

Consider this summary of his main points on Sign 8:

Jonathan makes many more deep connections between scriptures and Sign 8 and their importance to the Church and the Consummation of the Age. Building upon the 17-rowed triangle of the number 153 displayed in Jo-Blog’s Go Fish, this is how Jonathan describes this mathematical principle (drag to enlarge, noting number 153 forms an equilateral triangle of sides 17 x 17 x 17): 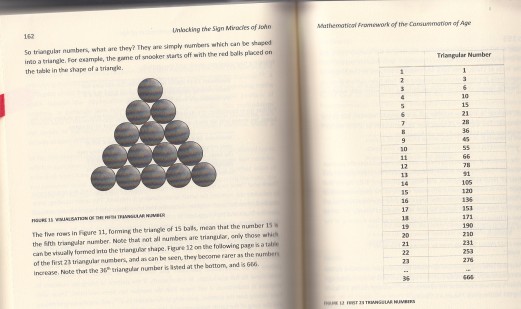 From this brief overview of well-researched data we can confidently conclude that the mysteries of the kingdom of heaven include mathematical principles as an important part of its transcendental wisdom. Selah!