Ever since David Noakes brought that word in November 2015 from the Lord urging Britain to “Come out” of the EU, we’ve been monitoring reports indicative of progress towards the fulfillment of the reason behind the Lord’s admonition (emphases mine):

“Rather than rely on Me and My faithfulness to you, you chose, for worldly purposes, to join yourself to an institution which has denied My Name and refused to acknowledge Me in its councils. My fierce anger is upon that institution on account of its rebellion, its defiant rejection of Me and its hardness of heart towards My ancient people Israel…I warn you now that the European institution will not repent, even though I bring disaster and destruction upon it. I urge you, O Britain still beloved by Me for the sake of your godly forefathers, come out of her, so that you may not be caught up in that same destruction, for I am even now arising in judgment to bring to nothing what she has sought to achieve….”

So, here’s Michael Smith on The Bruges Group’s Facebook, as posted on Saturday: 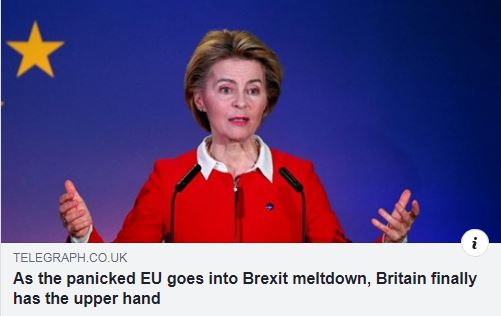 As the panicked EU goes into Brexit meltdown, Britain finally has the upper hand

‘The EU is scoffing with panic. This week, its leaders neurotically laughed off the threat of a Parliament shutdown, as bureaucrats slammed their fists over post-Brexit budget cuts. Press officers tuttingly buried an economic report warning that Brexit will rock bloc economies. But they struggled to firefight raging speculation as to who might follow Britain out the door. As rumours rumbled of an Italexit debt crisis, Marine Le Pen thundered that a global Eurosceptic movement has infiltrated Brussels.

‘Perhaps the most intriguing development this week, however, is Michel Barnier’s shift in persona. Mere months ago, Mr Barnier was gloomily instructing Britain to sign up to vassalage. Lecture highlights included “why Britain must take responsibility” (by becoming an EU satellite state) and why “choices” (for example liberty) must have “consequences”. But suddenly, the school master has a snake oil salesman. His arid presentations on Britain’s self-inflicted fate have morphed into buttery pitches for “a best in class free trade agreement”.

‘Such a “best in class” deal could be otherwise described as Theresa Mayite vassalage. It entails sucking Britain into megalomaniac defence projects, allowing Brussels to plunder Britain’s fishing waters, and blessing Britain with freedom for the small price of sacrificing its competitiveness. This “exceptional offer” is being gift-wrapped free of charge in the tangled red ribbons of state aid paperwork and taxation regulations. Available for a limited time only (expires Dec 2020).

‘In reality, though Brussels knows that its chance to flog Britain the worst trade deal in history is slipping away. It can no longer fall back on the backstop to keep us locked in Hotel California. Boris Johnson’s thumping majority also means Britain’s “no deal” bargaining chip is back in play: a WTO Brexit would pass through Parliament reasonably comfortably. Revelations this week that, in the event of no deal, Japanese car giant Nissan would consider doubling down on the UK to boost its domestic market share, and protect its Sunderland plant, underline the inconvenient truth: Project Fear premonitions are overblown, and Britain could cope perfectly well without a trade deal.

‘It is also becoming embarrassingly clear that the EU has no actual strategy. Only the clapped out choreography of a collapsing robo-bureaucracy. The most tedious of its “secret moves” is sequencing. Granted, this was how Brussels tripped up that lurching political equivalent to two left feet, Theresa May. She sealed her fate when she foolishly agreed to settle Northern Ireland before penning a divorce settlement.

‘But the idea that Boris Johnson’s government would fall for this again is laughable. Still the EU tries its luck: this week Mr Barnier said that before signing up to a trade deal, Britain would have to agree to the EU’s conditions – effectively trying to turn fishing and Gibraltar into the new Irish Border.

‘Another of the EU’s recycled moves is heel dragging. It intends to bog Britain down with absurd and nonsensically disparate demands until the deadline is near. The idea being that Boris Johnson will feel political pressure to avoid breaking his promise to settle Brexit by the end of the year – and thus sign up to a dud deal.Britain’s counter-move is already evident – to negotiate trade deals with the United States and other countries, as talks with Brussels flounder; Cummings and co are determined to send out the message that if the EU does not want to engage in talks then that it can go jogging.

‘Indeed, Trade Secretary Liz Truss announced on Thursday that Britain is seeking huge reductions in tariffs from a trade deal with the United States. The Government also intends to begin negotiations with Japan, Australia and New Zealand in the coming months.

‘Then there is the oldest trick of the bureaucratic sociopath: the unflinching lie. My favourite peddled by the EU this week is that free movement must continue as the condition for any trade deal. Even though the EU has, in the Political Declaration, conceded the precise contrary.<

‘It is increasingly clear that Brussels is the new Theresa May of these negotiations. And it is finally heading for a rude awakening.’

Today’s news is of the EU’s chief negotiator saying our Chancellor of the Exchequer, Sajid Javid, should not to “kid” himself about the City of London gaining access to the European market for decades after Brexit. The Telegraph reports:‘Mr Barnier insisted that Britain cannot get a long-term guarantee that its finance firms will be free to sell services into the European Union.

‘The EU negotiator said Brussels will reject efforts to agree a financial services chapter in the new UK-EU trade deal or a long-term deal on “equivalence”, the regime which is to govern Square Mile companies’ access from the end of this year.

‘Equivalence decisions will be made unilaterally by the European Union, Mr Barnier insisted, meaning access could be withdrawn at short notice and in some cases in as little as 30 days. It is feared that Brussels could in future shut off access rapidly to suit its own political interests, despite the economic impact to businesses on the continent…’

Therefore, as the Lord deals with the EU according to what He told David Noakes, keep watching developments and any change to its tune about our access to its markets…